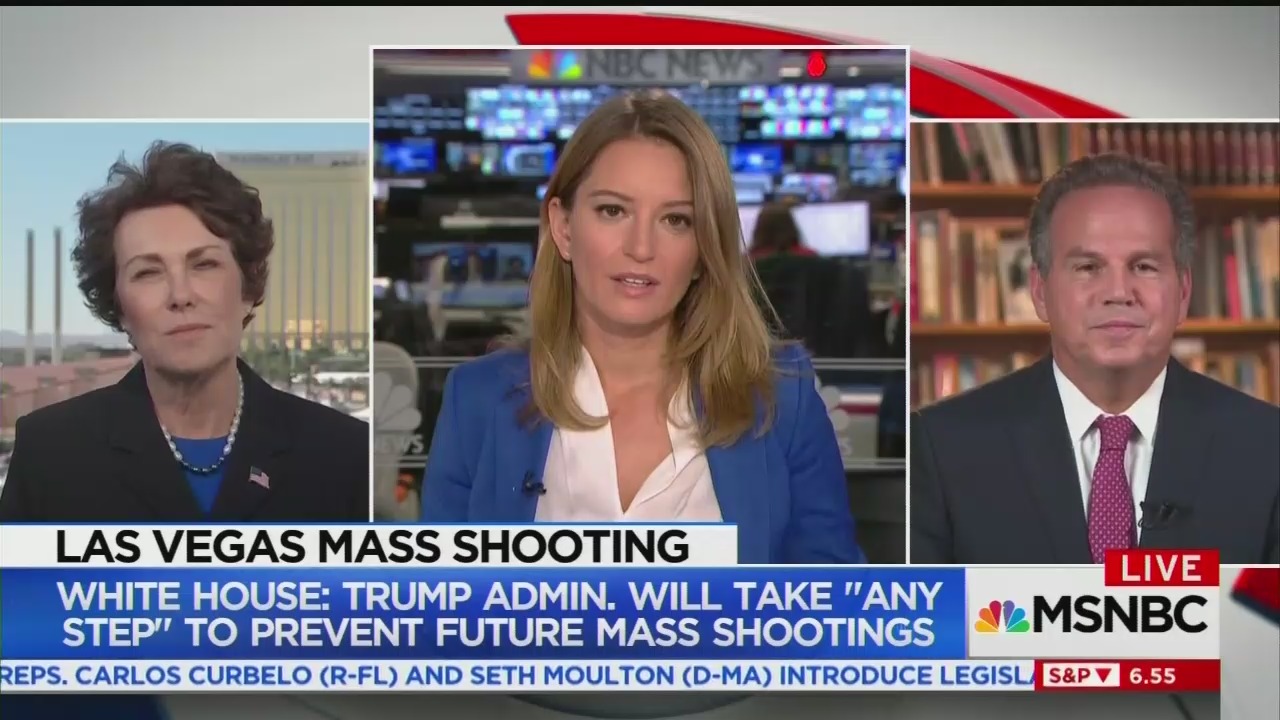 During the Friday afternoon 1 PM Eastern hour of MSNBC Live, anchor Katy Tur led a gun control discussion with Democrat Congressman David Cicilline (R.I.) and Congresswoman Jacky Rosen (Nev.). Despite gun control being the pet topic of the Democrat party, Tur kept pushing the politicians from the left, trying to get them to agree that what Democrats really needed to do, was figure out a way to repeal the 2nd Amendment.

The conversation focused on Congress’ bipartisan support for legislation that would ban bump stocks, as a solution to the violence we saw in Las Vegas last Sunday. Both members of Congress were on board as supporters of that bill.

Rosen began on a positive note, telling Tur that out of the chaos, she’s also seen the “best of humanity” and that “everyone” wants to help find “common sense” ways to prevent these kinds of massacres from happening again. She urged that the next step was to do the proper research to find out more about the specific “causes” of gun violence in this country. But Tur wasn’t satisfied with the initial proposal, scoffing that banning bump stocks wasn’t “enough” to address the issue.

“You talk about common sense solutions, congresswoman. Is banning a bump stocks enough of a common sense resolution to something like this?” Tur asked, shaking her head in disbelief.

Rosen responded that it was “a start” and the goal was to put “obstacles in place” to “not allow someone to have this kind of item that can create this massive amounts of damage,” again. But Tur kept pushing for more aggressive gun control measures. Turning to her other guest, Congressman David Cicilline, she said again that she finds this bump stock ban inadequate:

According to stats out there, more people have died by gun violence in the last two days then died total in Las Vegas, just in the last two days. 47,000 shootings in this country in this year alone, 11,000 deaths. That includes gun violence, it includes purposeful homicides, it also includes accidents. A number of those are just children who happen to get ahold of their parents' guns in their house, guns parents brought in presumably because they were trying to make their family safer. Congressman, Cicilline, I’m sorry I just don’t see how a ban on bump stocks really does a lot to to impact what we see in this country and the amount of deaths we see from gun violence.

Yeah this was a crazy person shooting at a field and it's horrific and terrible, sure, people shouldn't be allowed to use their guns as an automatic weapon, but that's like, I mean, that's trying to heal the symptom but looking nothing at the cause.

Ironically this last part is exactly the argument conservatives make in defense of the second amendment, except Tur twists it to mean that “guns” themselves are the “cause” of violence, instead of violent people.

Cicilline was more agreeable to what Tur was arguing, and blamed Republicans for being slow to move on more measures to restrict gun rights.He put forth the “next steps” Congress needed to make after the bump stock ban:

[T]here are many many good ideas but we have so far not had any Republicans and certainly the Republicans House leadership, willing to move forward on any of these proposals. We had San Bernardino, Aurora, Sandy Hook, we always have these moments of silence and everyone says, we spend exactly 30 seconds, we say nothing and we do nothing…

There are lots of good ideas, but so far we've been unsuccessful in persuading the House Republican leadership to bring any of these bills to the floor for a vote. People want common sense gun safety proposals to come to reality. There are a lot of good ideas. We have to continue to press our Republican colleagues to bring those bills to the floor.

The bump stock is an easy, quick answer we ought to do that quickly to show the American people we can get something done and then we need to move on to universal background checks and a number of other really good proposals that can significantly reduce gun violence in this country.

That’s when Tur made her plea for not just gun control, but getting rid of guns entirely. She cited an “interesting” “conservative” New York Times columnist, who argued we should repeal the Second Amendment entirely. After making her case, she floated the idea to her guests to see if they agreed this is what the Democrats’ end goal should be:

But let's be honest, hand guns kill more people in this country than a person with a bump stock on their semi-automatic weapons. There are horrific events, but handguns are what kill people in this country on a daily basis. Congwoman, Brett Stevens, conservative, "New York Times" op-ed columnist had an interesting columnist oped where he said the Second Amendment should be repealed. In it he argued the reason Democrats are so unsuccessful in getting any gun legislation passed because nobody believes democratic lip service when they talk about guns. They don't believe Democrats really do value the Second Amendment. He says if Democrats want to get anything done, they should go for what the Democrats, he thinks believe, which is the Second Amendment is not helping this country in any way and there should be a movement to try and change the constitution. Repeal that amendment. It's not keeping anyone safer.

Rosen pushed back against that notion, saying she fully supported the Second Amendment, before the interview concluded:

Well, I haven't read his op-ed but I'll tell you this I support the Second Amendment fully. What I really to want see as a former systems analyst is we repeal that restriction on doing the analyses across the country of causes of violence. Let's say, for example we find a leading cause for gun death is for domestic violence or abusers. We can turn resources into helping victims, helping educate, to mental health services and support services. Unless we do this analysis and we see what the causes are across the country, just like you were mentioning, so many deaths even in the past few days across the country, if we do this analyses, those analytics can lead us to each of our communities find common sense solutions that may be different than what we think. So I fully support the Second Amendment and I think we need to do the analysis to point us in the right direction.