After journalists and celebrities gushed about gun control on Twitter after this morning’s shooting of GOP Rep. Steve Scalise, some members of the media took their partisan advocacy on air. MSNBC’s counter-terrorism expert Malcolm Nance admitted to anchor Brian Williams during the 11 am hour, that he cared less about the motives behind today’s shooting than how the shooter obtained his gun.

Williams began by posing the question, “What are you most curious about now?” to Nance, who responded:

I'm most curious about whether the type of attack that he carried out whether it was focused on Steve Scalise. Was it a particular methodology that was leading up to an assassination attempt, or was it just a generically a political attack on people he saw as his opponents. The picture is getting a little clearer, but it doesn't matter, this was an attack on our representative democracy. It attacked our representative, whether Republican or Democrat. The most important thing we need to understand from this is this is what happens when you have an over proliferation of guns, and it is to be expected to a certain extent.

The impulse to blame guns and ignore all the other factors that go into an act of violence is typical for the left, but Nance isn’t just any gun-grabbing liberal. In April, he “nominated” one of Trump’s international buildings to be the target of ISIS’s next suicide bombing: 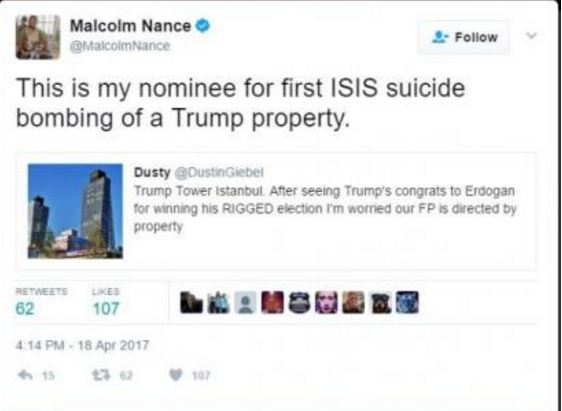 He deleted the tweet a few hours later, but never acknowledged or apologized for advocating for terrorism. Yet today he has the audacity to blame guns for a radical liberal targeting and shooting a GOP Congressman.

I will go so far as to say Donald Trump is the ISIS candidate. He inflames the passions of people in the West to perform Islamophobia, to draw recruits to them, to make them say ‘This is what America is.