Rumsfeld Shuts Down 'The View:' ‘Enormous Difference’ Between Collusion and Interference 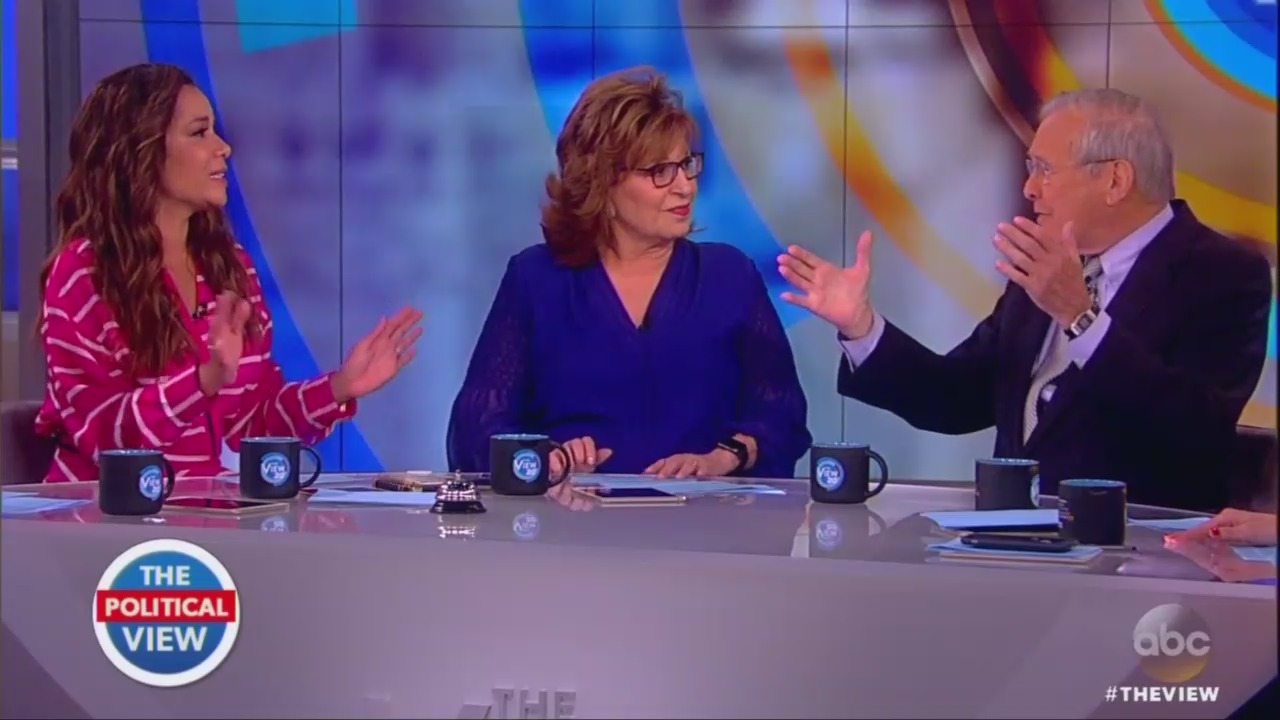 On Thursday’s The View, guest Donald Rumsfeld wouldn’t take the bait when hosts Joy Behar and Sunny Hostin repeatedly pressured the former Secretary of Defense to sentence Donald Trump to impeachment. “Why would you want to engage in hypotheticals?” Rumsfeld pointedly asked the hosts, after they aggressively tried to get Rumsfeld to make a legal judgement on the sitting president.

Midway through the show, the hosts welcomed the former Secretary of State under presidents Gerald Ford and George W. Bush, and tried to tie his experience going through Watergate to the current Russia-White House investigation. Host Joy Behar listed what she saw as the similarities between the two investigations and prodded Rumsfeld to agree. But he dismissed Behar’s paranoid comparison, calling it “a stretch.”

DONALD RUMSFELD: I think drawing those -- suggesting that we're at a point that approximates Watergate I think is a stretch.

BEHAR: Don, I really believe this is worse. The Russian interference---We have a foreign nation interfering with our election. You don't think that's unbelievably sad for this country?

At this point, host and lawyer Hostin essentially cross-examined Rumsfeld, repeatedly asking him to confirm that Trump should be impeached, (if there was collusion with Russia.)

Rumsfeld refused to go into hypotheticals with Hostin, asking: “Why would I want to ‘if’ that? Why would you want to engage in hypotheticals?” He then called out the pair for “jumping to conclusions.”

HOSTIN: There is an investigation going on. If he is found to have coll--

RUMSFELD: And we’ll find out what the investigation proves but we don't know the answer.

HOSTIN: If it's true, should he be impeached?

HOSTIN: If his administration colluded with the Russians to win this election should he be impeached?

RUMSFELD: I haven’t seen any evidence that they have colluded--

RUMSFELD: Why would I want to ‘if’ that?

RUMSFELD: Why would you want to engage in hypotheticals?

HOSTIN: Because it could become reality.

RUMSFELD: This man was elected President of the United States. There is an investigation on the subject you have cited, which is perfectly appropriate. Every administration has investigations.

HOSTIN: And a special prosecutor.

RUMSFELD: Nothing has been concluded, but I have a sense you may be jumping to conclusions.

HOSTIN: But it's a hypothesis.

BEHAR: But she’s not jumping to conclusions when she is it is a fact that the Russians interfered in the election. We know that for a fact.

Rumsfeld brought up that Russia and other countries have attempted to interfere in our elections many times before, saying this was nothing groundbreaking. Behar snarked, “So it’s okay then?”

BEHAR: So it's okay then?

RUMSFELD: No, it's not okay.

BEHAR: Supposedly, these are enemies of the United States.

Before cutting to commercial, Rumsfeld blasted the leading questions coming from Hostin and Behar, stating they were “taking a leap” for confusing attempted interference and collusion with the White House:

RUMSFELD: But you're taking a leap from another country horsing around in our business and collusion. And there is an enormous difference.

HOSTIN: If there is collusion, isn't that an impeachable offense?