Obama Slams School Lunch Critics: 'What Is Wrong With You?!' 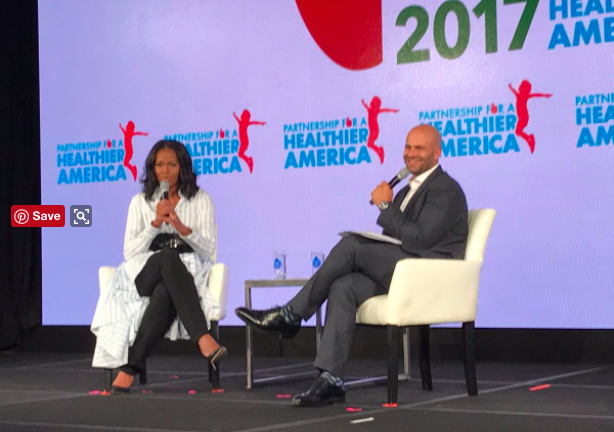 An impassioned Michelle Obama slammed President Trump’s efforts to roll back some of the regulations on school lunches she started as First Lady. Obama stated bluntly that critics to her healthy lunch program simply “don’t care about your kid.”

The former First Lady was headlining an event for the group she co-founded, The Partnership for a Healthier America, Friday morning when she made the remarks to moderator, and her former chef Sam Kass.

After explaining the growing obesity problem with children, Obama blamed confusing nutritional labels and unmarked calorie counts at fast-food restaurants as one reason why kids were increasingly overweight these days. “You just don’t know!” Obama said, apparently unaware that nutrition guidelines are taught to children in elementary school and most chain restaurants these days, including fast-food, display their calorie counts on menus.

Then she changed tune, attacking critics for wanting to keep parents “ignorant” and kids unhealthy. Obama attributed backlash to her plan as partisan malice and Republicans not “caring” about kids. “Think about why someone is OK with your kids eating crap!” she exclaimed.

“This is where you really have to look at motives. You have to stop and think, why don't you want our kids to have good food at school? What is wrong with you?! And why is that a partisan issue?” she exclaimed, to audience applause.

"Like me, don’t like me, but think about why someone is OK with your kids eating crap?" she asked.

"Why would you celebrate that? Why would you sit idly and be ok with that? Because here’s the secret: If somebody is doing that, they don’t care about your kid. And we need to demand everyone to care deeply about our kids. That’s all we have,” she stated.

Obama added later that what Trump was doing to roll back certain standards from her program was in essence, promoting ignorance.

"You want to talk about nanny state and government intervention, well, you just buy the food and be quiet and you don’t need to know what is in it," she added. "That is essentially what a move like this is saying to you moms.”

CBS Evening News gave an extremely brief mention on her appearance, touting Trump “gutting” the school lunch program, while NBC Nightly News’ Lester Holt played a lengthy clip of her scolding Trump, saying she was “fighting back” against something that was “more important” than her “legacy.”

The Guardian gushed that Michelle “savaged” Trump’s “gutting of her legacy.”