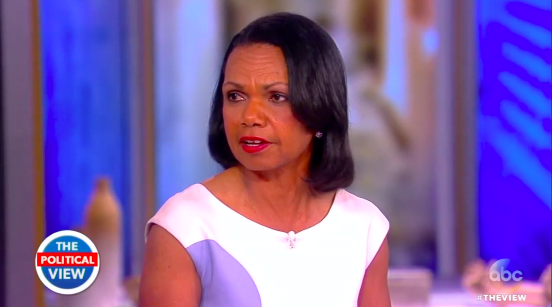 Former Secretary of State Condoleezza Rice appeared on Tuesday’s The View, where she was pummelled with partisan questions aimed to bait her into admitting that Hillary Clinton should’ve won the 2016 election and attack Donald Trump. Rice didn’t fall for any of the liberal hosts’ traps though and held her own, even earning the panel’s listening ear, something most Republicans don’t get when guests on The View.

Host Joy Behar began by trying to get Rice to comment on current Secretary of State Rex Tillerson’s attachments to Russia. Rice explained that as former CEO of Exxon, of course he would have a business relationship with a country that is rich in oil.

She went on to bring up what Behar was really driving at, the media-driven meme that Russians “hacked the election,” before Behar could even get to asking it.

RICE: Look at where relations are with the Russians. Again, I think we ought to be looking into what ties were there, that makes perfectly good sense. But I also want to say something about Vladimir Putin and interfering in our elections. He has been trying to interfere in your election and everybody else’s for a very long time. What cyber allows him to do is to do it more efficiently and more quickly. Let's not deceive ourselves that the Russians haven't tried these tricks before. They have. Now, I would have said -- I would have said to the Russians, ‘we know you did it. At the time of our choosing, we will find a way to punish that behavior.’ But Vladimir Putin is an eye for an eye kind of person, and we questioned -- Secretary Clinton questioned the legitimacy of his election in 2012. Now he's saying, I'm going to question the legitimacy of your election by hacking into it and so forth.

Rice went on to scold the left for giving Putin the “satisfaction” of thinking he swayed our electoral process:

So, don't let him get the satisfaction of thinking that we don't believe our own elections to be legitimate.

Host Sara Haines followed up by asking if Rice really felt that Putin went after Clinton as a sort of revenge:

HAINES: So do you think that was a personal eye for an eye against Hillary Clinton?

RICE: I think it was personal. He likes to intimidate. Now, I can tell you that I was with him on many occasions and one particular occasion we went into a room to discuss and his people are sitting on one sofa. He and his foreign minister. And I'm sitting on the other. And I'm delivering a message about U.S./Russian relations and they were messing around in Georgia at the time and I said, you know, Mr. President, if you do anything in Georgia, President Bush wants you to know that that would greatly affect our relationship. And he stood up and now he's peering over me. And so just on instinct, I stood up too. Now, I'm five foot --

WHOOPI: He didn't realize who he was peering over.

RICE: I'm 5'10" in heels. He's not. So you can't be intimidated by Putin or let him play these psychological games.

Host Sunny Hostin tried to get back to the Russian hacking question again, asking bluntly:

HOSTIN: But Madam Secretary, if he indeed did engage in these types of tactics in our election, then the very legitimacy of our election is at issue, isn't it?

Rice immediately shot that narrative down, as grasping at straws and showing a mistrust in the American people’s intelligence.

RICE: No, no. That's where I -- first of all, I don't want to question his motives beyond he's an eye for an eye kind of person. Secondly, I trust the people who voted in Wisconsin and Texas and Alabama and California to have voted on the basis of who they thought was best going to represent their interests. And so I'm not going to question the legitimacy of their vote because Vladimir Putin tried to interfere in the elections. That's just a step that I don’t think we should take. Let’s trust our fellow citizens to have been smart enough to have voted for the people they thought they ought to be voting for.

The View in particular has been pushing the delegitimized election narrative hard since Trump won. In December, the hosts even tried to get Trump out of office, excitedly sharing their theory before his inauguration, using this as their primary reason for his ineligibility.