Maddow, Meyers: Trump Is Like ‘Serial Killer’ that ‘Wants to Kill’ Media He’s In Love With 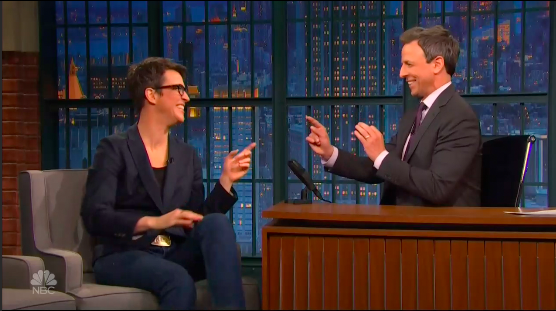 Comedy gets dark quickly on late night television lately, when you have a president that is so detested by the media. Last night on NBC’s Late Night, host Seth Meyers and MSNBC’s Rachel Maddow “joked” that President Trump was just like fictional serial killer Hannibal Lecter, from the book and movie Silence of the Lambs. The pair laughed that Trump secretly wanted to “kill” the media, while lapping up the attention they gave him.

The interview began with Maddow telling a story of a phone conversation she had with Trump during the primaries, when he first announced his candidacy. Meyers then wondered if Maddow would get another opportunity to have a one-on-one conversation with the president.

MEYERS: There’s a chance, though.

Meyers responded that it seemed like Trump wanted “to be loved and appreciated by everybody,” so “ultimately” he had to play nice with members of the press other than Fox News to get the attention he wanted. Maddow then took it a step further, saying Trump wanted to “kill” the media, even though he loved the attention they gave him:

Well there is a tension about that in all seriousness in the administration. Because there has never been a presidency, an administration that was this overtly hostile to the press. They’re talking about like revising the First Amendment. The chief of staff this weekend was saying they're looking at those libel laws. What do you mean looking at them? They  they don't look back! We have a First Amendment. You can't change it. They're looking at changing that stuff, and they put out their first campaign ad for 2020 which denounces the “fake news.” And they're really against us, but at the same time, there has never been a president who is more addicted to the news about himself, and who is more responsive to the news, that he supposedly thinks is so worthless. So it is a weird tension. I think it's a dangerous time for the First Amendment, and for the free press in this country, and at the same time we're oddly influential with the guy that wants to kill us.

Meyers picked up on that comment and ran with it, comparing Trump to fictional serial killer “Hannibal Lecter.” In the movie Silence of the Lambs, FBI agent Clarice Starling is assigned to get information out of Lecter yet he is still attracted to her.

MEYERS: Yeah. It's a weird dance. It's like one of those movies where the serial killer is also clearly in love with the person who's trying to arrest him.

MADDOW: So you're Clarice?

MEYERS: Yeah, Clarice, yeah. The press is Clarice and he's Lecter. [ Light laughter ] It's like a cat and mouse game and like, he's definitely gonna kill some other people, but maybe not me.

MADDOW: And he's age inappropriate.  And you can't figure out what she sees in him and I know.

MEYERS [impersonating Trump]: Tell me about the lambs.