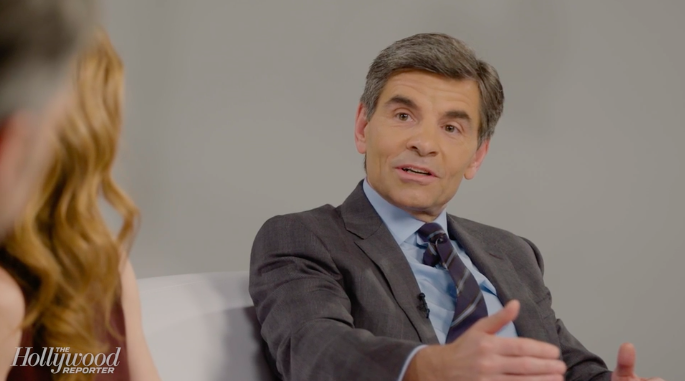 Friday, magazine and website The Hollywood Reporter spoke to news anchors from all of the major networks in a discussion about what the role of the journalist was in today’s day and age. ABC host and former Clinton administration official George Stephanopoulos was the most forceful of the group in arguing that it wasn’t the media’s role to share all sides of a story. In fact, he argued, it was the journalist’s job to report “the truth” and to silence viewpoints that didn’t “accept reality.”

THR first asked the group, consisting of CNN’s Jake Tapper, CBS’ Gayle King, ABC’s George Stephanopoulos, NBC’s Savannah Guthrie and Fox News Channel’s Bret Baier, what the “biggest crisis facing journalism today” was. After the panel agreed that “trust” and “credibility” were the top concerns they had with the public, THR wondered what journalists did when they had to report something that “may not align” with what their viewers “wanted to believe.”

Stephanopoulos first answered that the priority was to be “absolutely accurate and absolutely factual” and not get hung up on criticism from viewers who didn’t like their reporting. Obama family friend Gayle King added that there were “two sides” to every story, and it wasn’t the journalist’s “job” to give their viewers their opinions.

But Stephanopoulos took issue with that notion, echoing the more and more frequently heard opinion that journalists are to be “truth-tellers.”

STEPHANOPOULOS: I’m not sure there always are two sides to every story. I think that’s actually one of the challenges we’re dealing with right now. How do you contend with a situation where we know there’s a truth and we know there’s a false, and one side is trying to say, [video cuts to footage of Stephanopoulos grilling Mike Pence on ABC] “No, there’s actually two sides to this.” That’s become much more difficult and much more of a challenge, and that means we can’t do things necessarily the way we would have five, ten, fifteen years ago.

KING: George, I’m not saying that their side is the truth but they do believe that they have another point of view. I think it’s okay for them to put out their point of view but I think it’s upon us to say, “Okay, but this is also what is happening here. This is really the true story.” And I think that’s why it gets so frustrating.

The THR reporter then asked how the panel dealt with lies from the administration such as Trump’s allegation that he was wiretapped by President Obama. While CNN’s Tapper noted it was fair to report the facts and call out statements that didn’t support those facts, he added it was also fair to explain the president’s reasoning for making such a statement as well.

Stephanopoulos disagreed, again taking a hard stance from the left, arguing that it was doing viewers a disservice to be neutral and let all sides be heard. Moreover, he argued, when a politician or White House “refuses to accept a reality,” the journalist should question whether or not to “allow” these opinions to be heard on their network.

STEPHANOPOULOS: At what point does a White House, a member of Congress, a Senator refuses to accept a reality, at what point do you say, “You’re not allowed to come on anymore and broadcast that reality?" There’s not another side to certain questions. And it’s not serving our viewers, to allow people to come on and say things, at some point, that are not true. We’re all dealing with it..Is this really helping people to allow falsehoods to be propagated?

GUTHRIE: But on the other hand, maybe people need to see that? Why anesthetize, you know?