It’s not often you hear a left-leaning former news network host sticking up for persecuted Christians, but that’s exactly what happened Monday night on Fox News Channel. Host Tucker Carlson brought on former CNN host and current editor of The Daily Mail Piers Morgan to get his take on why the media wasn’t giving the Palm Sunday attacks in Egypt on churches the attention they deserved. 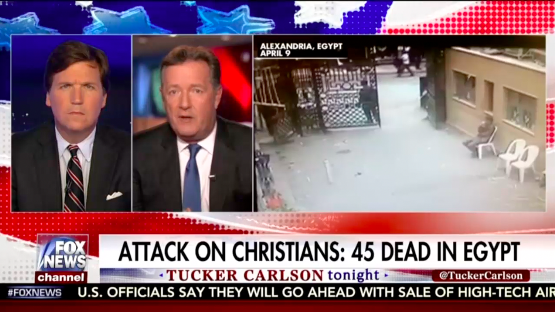 Carlson began by asking Morgan why the American media didn’t seem to “care much” about the targeted attacks on Christians in Egypt, though they did care about ISIS attacks on the general population in Europe.

CARLSON: [I]t was one of the latest of many attacks on the Egyptian minority, the Christian minority there. And yet the American press doesn't seem to care much about it, the obliteration of Middle East's once large Christian population. The question is why don't they care? We are joined by Piers Morgan, he’s editor at large at DailyMail.com. Pierce, thank you for coming on. You sent out a tweet right after this saying, “This will not get the attention of massacres in Europe, but it should.” Why won't it, do you think?

Morgan agreed that the media certainly gave much more attention to attacks in Europe over these kinds of attacks on Christians. But, he argued, the attacks in Egypt should be getting equal, if not more attention from the media, because they were part of a specific mission to “eradicate” Christianity in the Middle East:

Unfortunately, if it happens in the Middle East, this kind of atrocity, it just does not seem to attract the kind of media attention in America that it would if it happened, as we’ve seen in attacks in Sweden the last few days, in London two weeks ago. I was there for that. Huge attention in the American media. In Paris and Nice. These get huge attention. Yet what happened in Egypt was unbelievably significant. If you look at what ISIS really stands for, what they are carrying out now in the Middle East and the East in particular, is that it kind of genocidal attack on Christians and Christianity. They want Christianity eradicated and they want to convert all Muslims to their crusade, they want it to be a holy war. They want Christians gone. And I don’t think that narrative is getting the attention it should get in the American media and I have to say, I think in other media around the world.

Morgan went on to say that ISIS made it “absolutely clear” that these attacks were part of  a “war on the cross,” and that singling out of a specific religion should be significant to the media.

“I think this is a huge story. This is the kind of story that ought to be dominating cable news in America. It should be dominating headlines around the world,” Morgan stated. “ISIS have [sic] declared war on Christianity. I'm not seeing that being covered enough,” he added.

Carlson and Morgan wondered why the media gave lone wolf terrorists so much more attention than genocidal efforts by Islamic extremists to take out religious groups like Christians.

MORGAN: But actually what happened in Egypt to me with these attacks on these two coptic churches was hugely more significant in the overall -- it looks very tactical by ISIS. It look like they sent in highly trained people to do this. And it looked far more coordinated part of a much more bigger plot by them to take on Christianity. As was the attack in St. Petersburg. They said it! Like I said, they said this was an attack on the cross. Again, the coverage of St. Petersburg, the coverage in Egypt, not as high as a handful of people being killed in Sweden and London. And I ask, simply, why?