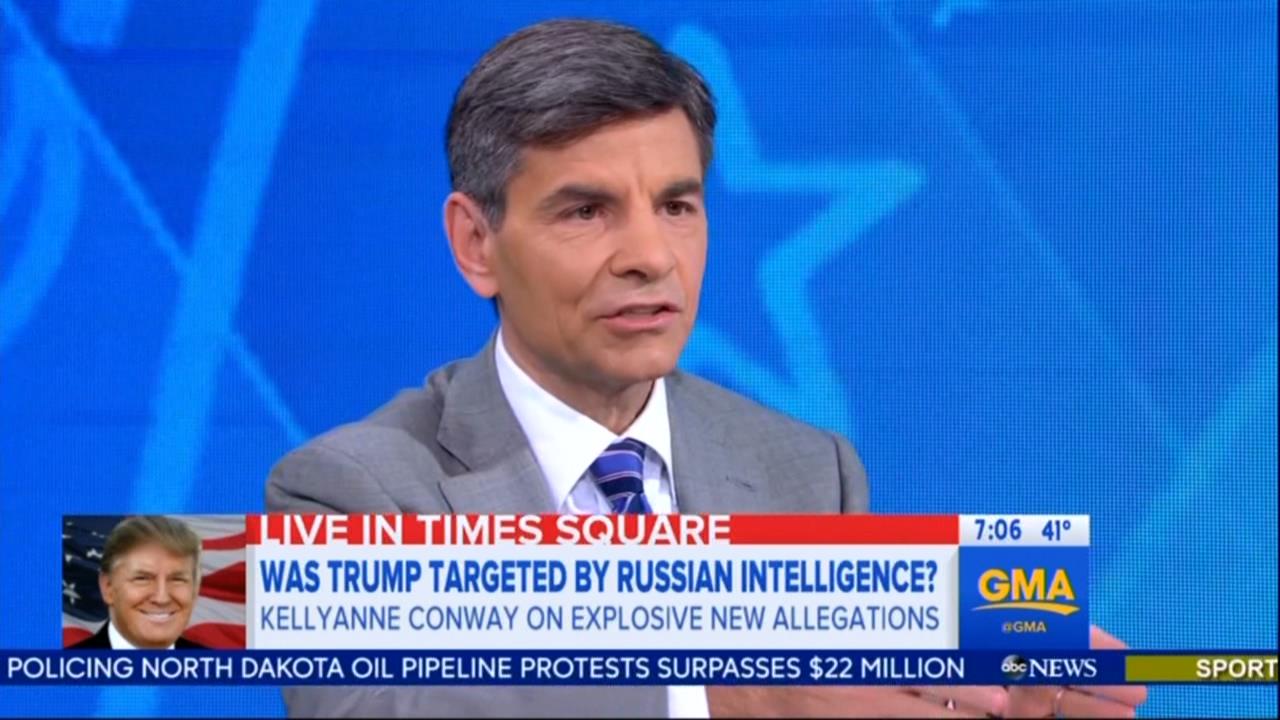 Wednesday’s Good Morning America had anchor George Stephanopoulos struggling to regain control of the interview after Trump’s senior advisor Kellyanne Conway called the media out for for their pro-Clinton bias. After repeated attempts to get Conway to answer whether or not Trump accepted that Russia hacked the election, Conway hit back, accusing the media of being the ones who tried to sway the results of the election for Hillary.

For most of the nearly five-minute long interview, Stephanopoulos hammered Conway on the just-released anonymous report claiming Russia had damaging information on Donald Trump. Though many in the media, including ABC, acknowledged that the claims were unsubstantiated, they still ate up the report and spent nearly an hour on the morning shows covering the story. Conway began by blasting ABC for “continuing to cover fake news and uncorroborated, unsubstantiated reports” before bringing up who else was to blame for trying to influence the election.

STEPHANOPOULOS: But does President-elect Trump accept the conclusion Russia was behind this.

CONWAY: He accepts the fact that Russia and China and North Korea and others have tried to hack but what we want everybody to know and accept there is zero, zero nexus between any alleged attempt to disrupt our democracy and swing the election results and succeeding in doing so. There was no smoking gun. Mr. Clapper --

STEPHANOPOULOS: The way you answered, you lumped in China and others again. I'm saying does he accept the conclusion --

CONWAY: He accepts the conclusion people are hacking all the time.

STEPHANOPOULOS: But Russia was behind it.

After Conway made this point, Stephanopoulos had a dumbfounded look on his face and asked for clarification.

STEPHANOPOULOS: What do you mean by that.

CONWAY: Oh, my god, George. There's never been -- unprecedented deluge of criticism and rumors and innuendos against Donald Trump. There was an active campaign by many in the media against him in his effort to win the presidency. He overcame that and I, frankly, think the media helped us because it was an anti-elitist election.

Of course, Stephanopoulos couldn’t concede that his own network had reported in a biased way all the way through the election, so he responded again in disbelief::

STEPHANOPOULOS: You think reporting on Donald Trump was an activity trying to help --
CONWAY: Disproportionate to Hillary? Yes, I think, yes, [chuckles] I think we can evidence that. I'm happy to come up with the evidence that every headline, the race is over, he has no path to victory, he's going to take the House and Senate down with him. We were just ignored on great days we were ignored. On most days we were mocked and there was an active, active, really -- an ongoing, active effort by many in the mainstream media to help Hillary Clinton win and they misled their viewers and their readers by telling them she would.