Tuesday morning’s CNN New Day ended the first hour of the show criticizing Donald Trump for attacking the media, which isn’t unusual but then the conversation quickly turned into what some may call an overreaction. 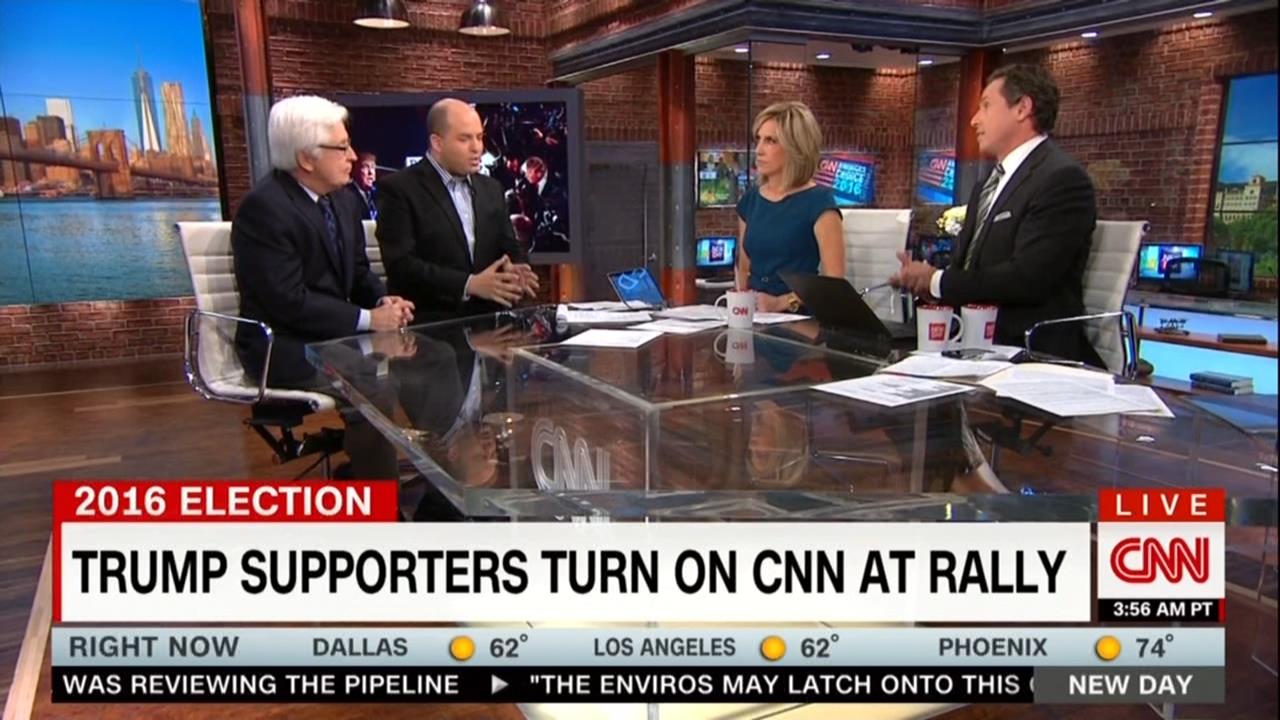 CNN began by playing a clip of a Donald Trump rally yesterday where the crowd began chanting, “CNN sucks” repeatedly. The CNN panel didn’t like that one bit and blamed Trump for not telling the crowd to quit it. Hosts Chris Cuomo and Alisyn Camerota, along with guests Brian Stelter and Bill Carter suggested that Trump was endangering reporters' lives, painting a nightmare scenario of Trump supporters violently attacking reporters. “I’m telling you, something is going to happen. Something is going to happen,” Cuomo solemnly warned.

After playing the short video clip, Cuomo, Camerota, Carter and Stelter wonder aloud what sinister outcome could arise from this display. Cuomo began by calling it “very high on the list of irresponsible things the guy has done,” blasting Trump for not thinking “about the implications to anybody other than himself.” Cuomo whined, “Have you ever heard of anybody in politics, let alone a presidential nominee, doing anything like this to the fourth estate?”

Stelter agreed this was “much, much worse than what we’ve seen in the past,” while Bill Carter added that there was “a mob mentality now at stake.” “These people are yelling and shouting and threatening reporters in a way I've never seen,” he stated.

Alisyn Camerota remarked that at rallies crowd members would “yell at” reporters and make “vulgar gestures at them.”

Cuomo then warned that “something is going to happen” to a reporter at a Trump rally because of the increased criticism of the media.

CUOMO: I dealt with that at the RNC. I get the passion. But a politician has a responsibility. You shape the passion of people. I don't mean to call supporters sheep. I respect people who want to back politicians. Trust me. But he makes them angry. Then instead of saying things to you, they want to do things to you. I'm telling you, something is going to happen. Something is going to happen.

Cuomo added that he used to joke that he would get arrested or attacked at Trump rally but now he fears it may be a reality.

CUOMO: It started as a joke. I used to joke, Trump is going to get me arrested some day. Somebody is going to say something in his stead, and I'm going to wind up getting arrested. Now it's not a joke anymore. I got to walk around with Camerota 24/7. [laughs]

CAMEROTA: Yeah, I protect him.