NYT's Blow Explodes On CNN Guest: 'This Guy Should Not Be Allowed' On TV 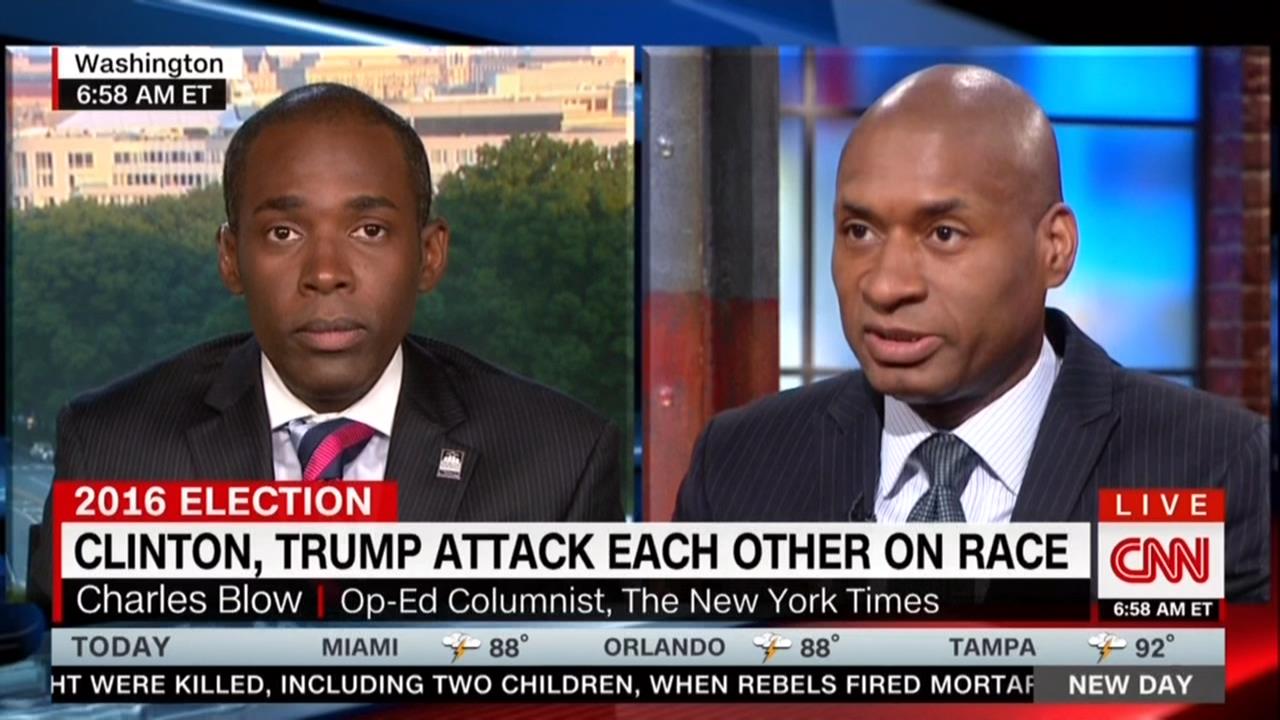 Throughout the interview, things got feisty when Dennard interrupted Blow a few times, (which is pretty standard routine on CNN between opposing guests.) Blow seemed personally affronted by it though, from the beginning. After Blow defended Hillary Clinton’s “hard choice” of calling out Trump for his “bigoted” statements, Dennard snarked to Blow:

DENNARD: You seem to have no problem saying it.[calling Trump a bigot]

Blow then shushed Dennard, stating, “The grown ups are thinking.”

Midway through the interview, things grew heated again when Blow defended Hillary Clinton apologizing for prior comments she made about black people, contrasting it with how Trump had not apologized for bringing up “birther” ideas about President Obama.

Dennard cut in again, saying, “It's a constitutional issue.”

He responded, “I want you both to talk.” Blow scolded, “Then you tell him when I’m talking, he doesn’t talk.”

Cuomo then turned on Dennard, stating that he seemed to be “ignoring” a “very long history of Hillary Clinton with respect to work within the African-American community,” before listing off Clinton’s resume. “Why do you ignore the record?” Cuomo asked Dennard.

Dennard responded that he thought Clinton was engaging in “voter suppression” by giving the impression to voters that Trump was “a racist, a bigot and a misogynist.” This didn’t sit well with Charles Blow, who blamed the “media” for letting Dennard have a platform, calling his statement the “most ridiculous thing” he’s heard the whole election.

BLOW:  Listen, this is why people have a problem with us in media. To let somebody like this come on and say what Hillary Clinton is doing is suppressing the white vote by pointing out what Donald Trump has said in his life. That's just patently false, ridiculous. It’s kind’ve the most ridiculous--

DENNARD: No it’s not Charles.

BLOW: Sorry, the most ridiculous thing I've heard all morning, probably all week, maybe this whole election. When you have actual voter suppression happening against black people after the gutting of the voter rights act and you have somebody, this guy -- I don't even know who this guy is--

BLOW:-- Comes on and talks about Hillary Clinton is suppressing the white vote by pointing out that this man is a bigot.

DENNARD: He’s not a bigot.

Blow turned his aim at CNN again saying it was “media malpractice” to let Dennard come on and defend Trump with the things he said and that Dennard “should not be allowed to come on television.”

DENNARD: We let you slide by calling out false allegations by people.

BLOW: --I’m not letting that slide. This guy should not be allowed to come on television and say something like that.

DENNARD: Charles, you do a lot and say a lot.

BLOW: --And then just let that slide.

DENNARD: You need to watch how you talk about somebody who's qualified to have this podium.

BLOW: I'm not picking today to let that start happening. Not today, not tomorrow. That doesn't slide.

CUOMO:  Understand. That's why you're here, Charles. So we can represent these different perspectives on it. Paris, thank you for being here. Charles, as always. Appreciate it.