Was that Sympathy from MSNBC? Reporters Note 'Witch Hunt' Against Trump Supporters Is 'Sad to Watch'

In a live report from San Jose, California last night, MSNBC surprisingly put down its pro-liberal bias for just a few minutes to look at a protest objectively. Outside a Trump rally, young protesters gathered to protest and even physically attack Trump supporters in what MSNBC’s Milissa Rehberger called a “beehive” “going after” individual Trump supporters. NBC Reporter Jacob Rascon even called the group’s intimidation tactics “sad to watch.”
Outside a Trump rally, NBC reporter Jacob Rascon followed a group of anti-Trump protesters as they began breaking into a parking garage while yelling with raised middle fingers. Describing the scene, Rascon told host Milissa Rehberger that he didn’t know if the group was trying to enter the building or following a Trump supporter, as they had been doing all night. 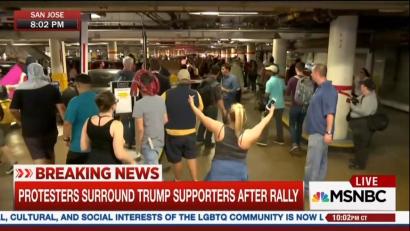 REHBERGER: What are they going after in there?

RASCON: You know what? I didn't see if they were going after a Trump supporter there, but we’ve decided not to follow them inside there. It looks to be most of the protester group, although there are others that are outside here. It's really been almost a witch hunt where they left the area where the police officers were, and then every time they saw a Trump supporter, they would just go at that person and as I said, there were fights back and forth.

REHBERGER: I've been — I’ve been noticing that.

Rehberger then remarked that the protesters tactics reminded her of “a beehive” with the group “going after one particular thing at a time.” She noted that she watched earlier as the group waited around an entrance to the building for a Trump supporter to exit and then “they gathered around them in a swarm.”

Rascon agreed with that description and called the whole situation “sad to watch” as police gathered on the scene.

RASCON: It really has. It was really sad to watch, the first Trump supporter who was a woman I would say in her late 20s or 30s who had a Trump jersey on and now, we’ll point out that we have, for the first time a bigger show of officers here. We have a few dozen, including those on motorcycle, that are telling the protesters to leave.

Woman who supports Trump surrounded by protesters, who taunt her, then throw eggs and bottles at her. pic.twitter.com/nHJ3cgYOfR

They also noted the protesters appeared to be carrying pro-socialism and Bernie Sanders signs.

REHBERGER:[I]’ve seen a few Bernie Sanders signs. I’ve seen some signs that say “we want socialism.” It does look like an overwhelmingly young crowd.

RASCON: You’re right. I’d say that this is a mostly young crowd. I would say I see very few folks who look to be older than 30, 35...Some of those protesting will say that they are Bernie Sanders. Others we ask if they have a candidate, they say there is no candidate, they're just anarchists, they describe themselves as.”

Earlier in the night, Rascon noted the violence in more detail from a live report for MSNBC:

JACOB RASCON: [A]s they walk around through the streets, they are targeting people who look like Trump supporters or have any Trump things on. Here we’ve got another one. Oh, we got a fight here. They’re throwing things. The guy who has got a Trump shirt on — oh, he just got knocked in the back of the head. He just got punched in the face and now they’re rushing him. Now, they’re knocking him to the ground and you’re watching as this Trump supporter is hit over — said he’s not backing down. We have a couple of fights going on at the same time. I’m not sure what you are seeing here, but I’m watching a couple of people wearing Trump shirts being hit. They’re hitting back. We’re going to keep following them. Now, they’re kicking this person. We’re following them down the street. At this point, we are now a couple of block away from where the protest started, where the venue was and another area of this protest I’m seeing a Make America Great Again hat lit on fire. That’s not uncommon either after these rallies that we’ve seen and they’re going to run after these people who have Trump things on. We’ll try to run and catch up to them and no, the answer is most protesters have not left and — a lot of the protesters seemed to have gone, but not this time. This is the most protesters I have seen hang around when it is violent like this.

H/T to analyst Curtis Houck for catching this exchange on MSNBC last night.