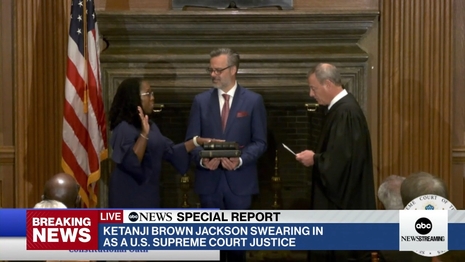 On Thursday afternoon, ABC's Good Morning America (GMA) tweeted a video of Justice Ketanji Brown Jackson being sworn in to replace the now-retired Stephen Breyer with the obviously false caption claiming "Ketanji Brown Jackson is sworn in as the first Black Supreme Court justice in U.S. history." This is despite the fact that not only is she the third black justice (behind Thurgood Marshall & Clarence Thomas), but she is now serving alongside Justice Thomas.

The tweet remained up for almost five hours before the backlash and ridicule online became so much that GMA was forced to take it down.

GMA's apparent ignorance of basic Supreme Court history wasn't just relegated to Twitter. The same video and caption were also posted to GMA's YouTube page before changing the video title and caption shortly after they deleted the tweet.

To make matters worse, both the Twitter video and YouTube video were monetized meaning the network made money from it and there were companies who ran ads that viewers had to watch before playing the video (see the end of the blog for the list).

Needless to say GMA got absolutely roasted on Twitter for this epic failure of a tweet. Our friend and press secretary for Florida Governor Ron DeSantis joked after GMA made the correction that Jackson was the first black woman justice that she "Didn’t know Good Morning America employed biologists"

Our colleague down the hall at MRCTV made the astute point that these mistakes are "what happens when you're this biased and get a little too excited."

Jokes aside, maybe if Good Morning America spent less time being corporate whores for their parent company Disney constantly, they would pay more attention to these little details about the makeup of the Supreme Court.

This ignorance by ABC's Good Morning America was made possible by Outback Steakhouse & Sleep Number. Their information is linked.