In the wake of the shooting of Congressman Steve Scalise on Wednesday, many liberal journalists and celebrities on Twitter and other social media sites began exploiting the tragedy, lobbying for gun control or bashing Republicans. But, New York Daily News commentator Shaun King chose specifically to blame white people for the incident. Embarking on a Twitter tirade he tweeted out the following,“Instead of white people, in general, taking the heat for James Hodgkinson, he is almost instantly being called a liberal radical.”

King’s tweets seemed to increase in intensity and anger as time went on as he at one point went as far as to call for the banning of white people. “But I continue to say that if America wanted to drastically reduce mass shootings by way of a human ban, white men must be banned first.” 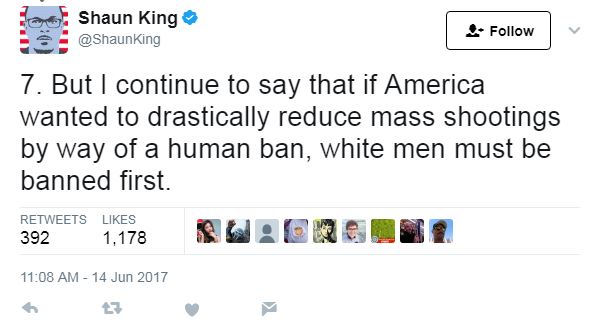 King gained worldwide notoriety back in 2015 when, as a Black Lives Matter activist, he was revealed to be white despite having previously identified himself as black.