If you're a Democrat serving in the military overseas, you may have to pay a pretty penny if you want to phone in and caucus in Saturday's Nevada caucus, Daily Beast's Tim Mak reports in today's article, "Nevada Democrats Screw Military Voters."

"In order to vote in the Democratic caucus in Nevada, military service members stationed abroad and their families must pre-register online a week before the event. After registering, they will receive a phone number. Then, on their own dime, they must call the number at noon on Saturday," Mak noted, adding that the Silver State's Democratic Party cautions "[i]nternational calling rates and fees may apply[.]"

Obviously the cost of voting skyrockets the longer the caucus would take to wrap up, and it's notable that the GOP's caucus procedures for absentees is much more straightforward and less expensive (emphases mine):

The Americans stationed abroad would then need to loiter on the call for as long as the caucus takes—potentially hours—until the caucus had completed, regardless of their military duties or schedules.

“Participants must be logged in at this time and stay on the entirety of the call to register their presidential preference,” according to the Nevada Democratic Party, something which has come under fire from Republicans. 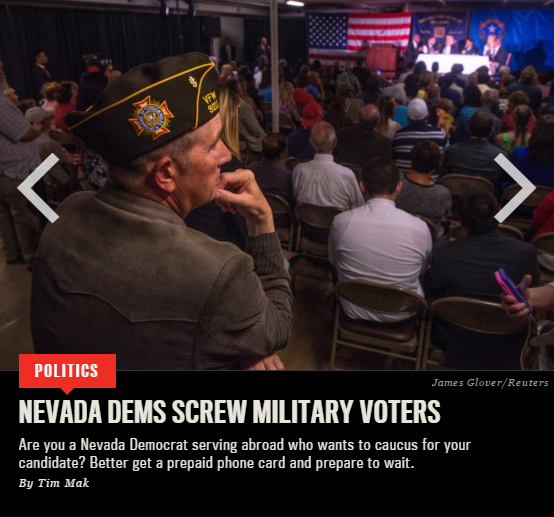 “Essentially, the Democrats’ plan requires overseas military personnel to wake up in the middle of the night, find a commercial phone, call in to the caucus, and then stay on the line for one or two or three hours to have their presidential preference registered,” said Bob Carey, the director of military and veterans outreach for the Republican National Committee.

Democrats pushed back: The Nevada caucus process should only take about 30 minutes, not hours, according to the DNC. And they also pointed out that their caucus day was on a weekend, unlike Republicans, who are holding their caucus on a weeknight.

But at least for military service members stationed abroad, the Nevada Republican caucus is much simpler: It simply requires troops and their families to request an absentee ballot online and submit it by the evening before the GOP caucus.

Kudos to the Daily Beast for taking note of this controversy. It's particularly illuminating in light of Democratic activists and pundits howling about how Republican-leaning states requiring photo ID is a "poll tax" on poor voters.