With his trenchant dry humor and perfectly-timed zings at various liberals in the media, Charles Krauthammer delighted the audience at the Media Research Center's 2013 Gala and DisHonors Aawrds, where the syndicated columnist graciously accepted the MRC's William F. Buckley Jr. Award for Media Excellence.

Dr. Krauthammer opened by quipping that, although he is still a licensed psychiatrist who could take on patients, he rather enjoys being a pundit in Washington, where he "deal[s] every day with people who suffer from paranoia and delusions of grandeur." Krauthammer then praised the Media Research Center's mission as he worked in cracks at liberal colleagues like Juan Williams and Nina Totenberg [watch the full acceptance speech in the video embed below]:

I'm really happy to be here tonight. I'm honored to be among you, particularly at the Media Research Center, who do God's work, namely slaying heathens. There's not nearly enough heathen-slaying going on in this town, and you do the work, I'm honored, delighted by --- [audience applause] Never gotten applause on heathen-slaying before. [laughter] I'm going to have to try that line again [laughter]

I'm very happy to be among old friends and, but the truth be told, I'm just happy to be anywhere where Juan Williams can't interrupt me. [laughter and applause from audience] I'll be sure to tell him how you feel.

Look, we all know why I'm here. Yes, you're honoring me with the Buckley Award, it's a wonderful title, and I am truly honored to be associated in any way with the greatest journalist and author of our time. But let's get real. The real story here, as always in Washington, is somewhat different, and I'm here to break it.

Here's what happened: Brent recently read that Inside Washington is about to close shop after 25 years. With a lightning calculation in his head, he realized, to his horror that that means that I have spent 1,200 consecutive Fridays with Nina Totenberg. [audience laughter]

Diana Nyad had it easy. All she had to do was to swim the shark-infested Florida straits. I have had to spend 25 years of Friday mornings with Mark Shields, Colby King, Evan Thomas, and the aforementioned Miss Totenberg, and without, mind you, even once having throttled anyone or having gone stark-raving mad. That, ladies and gentlemen, is heroism, I can assure you of that.

After making a few jokes about his disagreement with Ted Cruz's filibuster and how it has caused a bit of a stir within the conservative movement, Krauthammer confessed that:

It's been a tumultuous week in Washington, but looking at the broader picture, I think we can all here agree on how indebted we are, we of the conservative media, to our beloved president, his entourage and his acolytes. Never have so few given so much, material that is, to so many. [audience applause] 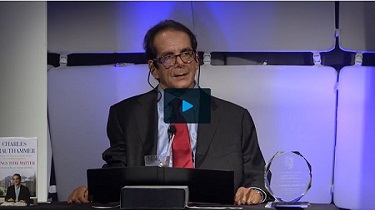 In closing, Krauthammer humorously counseled optimism for the political battles which lie ahead:

Allow me to thank you for this evening, for this award, and I want to say, especially to the young people here, keep your spirits up as we careen our way to Hell in a handbasket.

Enjoy the ride, and just remember, it's always darkest before dawn, and then it gets darker still [audience laughter] but do not lose your youthful optimism. Let me remind you of the words of my favorite pundit, Otto von Bismarck [audience laughter], not known for the punditry, who once said "God looks after idiots, children, drunkards, and the United States of America."  [audience laughter]

Dr. Krauthammer joins Cal Thomas, Rush Limbaugh, and Brit Hume among previous recipients of the award. In 2012, Orson Bean accepted the award on behalf of his late son-in-law, Andrew Breitbart.