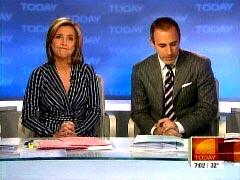 Attacking Fox News is not an unusual tactic of the mainstream media, but on Tuesday’s Today, Matt Lauer began the show with a false claim about Fox News.

Matt Lauer: "But we begin this morning with the controversial story out of Fox News: The O.J. Simpson case. Fox News Corporation deciding to cut its losses and cancel that highly controversial project where he speaks out about those notorious murders."

The problem here: the Fox broadcast network, not Fox News, almost aired the interview with O.J. Simpson. He did accurately call it Fox later in the broadcast but, never issued a correction. Meanwhile, on Fox and Friends, Brian Kilmeade, Steve Doocy, and Gretchen Carlson questioned Bill O’Reilly on whether the mainstream media will tie Fox News in with the O.J. Simpson interview.

Bill O’Reilly: "The press that, that has no agenda in this argument, are they reporting it accurately?"

Steve Doocy: "Not exactly. They're continuing to tie Fox News with the decision which of course-"

Doocy: "You know, there's a lot of it on cable news at night on a couple of other cable news networks."

They can now add a network news show in the morning. The entire transcript is below.

Brian Kilmeade: "Public outrage sinks the O.J. Simpson book deal and the TV special. Is the cancellation a surprise to those who condemned it from the outset? Joining us right now on the phone, the author of Culture Warrior still on sale right now and a perfect Christmas gift, the host of The O'Reilly Factor, Bill O'Reilly. Bill, are you surprised this is how it ends?"

Bill O’Reilly: "No I'm not. I have to say that when Geraldo and I were kicking it around on Friday we both said that we believed that News Corps would do the right thing. We just had to get their attention."

Gretchen Carlson: "I think a lot of people have been saying Bill, too, that credit should go to you and Geraldo for speaking out about this because some people might say 'hey if you work for the same company that's actually going to broadcast these two shows with O.J. Simpson, maybe, in some cases, you wouldn't be able to speak your mind."

O’Reilly: "Well, that's true. I think once and for all this should put to rest any kind of criticism in the Fox News Channel not being independent. I'm out of the country on vacation, so I haven't seen the press today. They been snarky or they have they reported it accurately?"

Kilmeade: "Daily News is loving every second of it and thinks it's not over yet."

O’Reilly: "The press that, that has no agenda in this argument, are they reporting it accurately?"

Steve Doocy: "Not exactly. They're continuing to tie Fox News with the decision which of course-"

Doocy: "You know, there's a lot of it on cable news at night on a couple of other cable news networks."

O’Reilly: "OK. Because, when I get back on Monday I am going to lay them out. Each one that does that. I am going to name them, put their picture up. So we're going to have a very good time next Monday doing that. But the big point is this, you remember the Reagan movie with CBS, right?"

O’Reilly: "OK then Moonves pulled the plug on the Reagan movie because it was a slash job, a hammer job on the late president and Nancy Reagan. It was disgraceful."

O’Reilly: "It was awful. Now, did you hear a word out of CBS when that was going on, CBS News?"

Break transcript. To be precise, as the Cyber Alert reported back in November 2003, CBS did report on the Reagan movie, after it was pulled. Continue transcript.

O’Reilly: "Not one word anywhere on their news vehicle. OK. So, Les Moonves did the right thing, he's the CEO of CBS television and he pulled it after I and some other people said..,"

O’Reilly: "...'hey you can't be running this.' Now, flash forward to last week when the Fox News Channel starts to report on this in a very intense way."

O’Reilly: "We laid it out. We set the agenda. We were the ones that were ahead. So you compare us to CBS News and any other news company, and I think that that's admirable. I think that people now know we are an independent operation."

Doocy: "Bill, let me ask you about this. The book was the idea of Judith Regan, and she also conducted the interview with O.J. Simpson. And reportedly she sp- paid him millions of dollars paid to a third party or something like that. What happens with her and her publishing imprint at News Corporation?"

O’Reilly: "I have no idea. You know, look, from the beginning I stayed out of personalities here for a very good reason. This is a culture war story. That's what this is. This, this is why I'm in business. This is what I do. As Brian mentioned, the book Culture Warrior, huge success. Why? Because Americans understand that there are two factions in the country, traditional factions that won't put up with this stuff and the secular progressives that say anything goes. Anything goes. So I'm saying to the American public from the get, you have to decide what kind of country you want, and this is a great example of the culture war. So you, the folks, have to make a decision. And I got, I stayed out of the personalities. Stayed out of there because that's not important. That's not important. What's important is the American people say no and they did."

Carlson: "What about the money?"

O’Reilly: "And once they did, once they did, any sane corporation, and certainly News Corps is that, says, 'we made a mistake,' and everybody makes them. And they corrected it."

Carlson: "What do you think about the money though, Bill? Because it seems, there seems to be a disparity this morning about whether or not O.J. Simpson actually collected this $3.5 million."

O’Reilly: "Yeah he collected the money."

O’Reilly: "Anybody in the book business knows that when you sign a contract to do a certain project upon the signature of the contract you get money. You don't get it all. So I figured he got half probably, maybe a little bit more. But, you know, he, he got some money out of it. And, but again, to me, I don't really care."

O’Reilly:"What I care about is the American people starting to pay attention to their country and what is happening inside their country and they did here. Now Simpson is a sleazy guy we all know that. We all know that this guy is a sociopath. He has no feelings for anybody but himself. I don't think that has to be demonstrated time and time again. So, he weaseled out some money. The money will probably be in litigation forever and that's the way it's going to come down."

Kilmeade: "Last question to you Bill. Did you, a loyal guy by nature, was it tough for you to come out for a week and say this is a disgrace?"

O’Reilly: "This is my job, Brian. This is what I've been doing for more than ten years on the Fox News Channel."