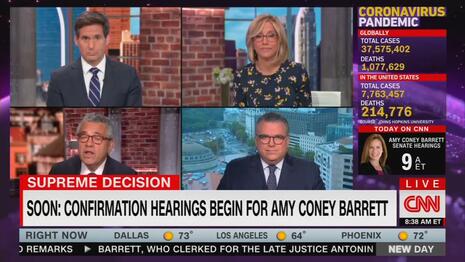 CNN’s New Day was on full offensive Monday morning in the minutes leading up to Amy Coney Barrett’s confirmation hearing. In the span of about ten minutes they laid out attacks on Barrett and Senate Republicans. One notable thing, they did not even mention the excellent credentials of the judge or that she is extremely qualified to sit on the Court. Instead, New Day co-host Alisyn Camerota followed Democratic Party talking points to the letter: “When you parse [her opening statement], does that spell doom for the Affordable Care Act?”

This continued when CNN Chief Legal Analyst Jeffrey Toobin denounced Barrett’s views, crying out: “I think more specifically spells doom for Roe v. Wade, because it suggests that issues like abortion, like gay rights should be decided by political branches of governments, ones directly accountable to the people. The code there is don't expect the courts to enforce rights.” There was no discussion on the role of courts, just the assertion that Barrett was wrong.

The ridiculously one-sided coverage followed the playbook that was formulated by the Democratic Party. Democratic nominee Joe Biden gave a speech on Friday where he opined on the danger of the Court striking down Obamacare. Democratic nominee Joe Biden stated on Friday that the Supreme Court was in danger of striking down the ACA. Senate Minority Leader Chuck Schumer proclaimed: “We’re focused on the issues and the merits. And on the illegitimacy of the process. We are not focusing on the personal characteristics of Amy Coney Barrett. Zero,”

As has been seen in recent Supreme Court hearings, the leftist media is more concerned with backing up their own political ideology and their own party over giving the nominee fair coverage. Toobin opined: “

The idea of moving from the most liberal member of the court to someone who will probably be as conservative as Clarence Thomas to a 6-3 conservative majority is something that is going to effect this country for decades to come. And after most of the Senators on that dais are forgotten, Amy Coney Barrett will be a justice deciding issues we can't even envision today and that's going to be of enormous consequence.

Coming completely unhinged, Toobin later decried the entire hearing as a life-threatening event due to coronavirus concerns: "The idea that they're putting all of these people in literal mortal danger to get Amy Coney Barrett confirmed before the election is just beyond surreal."

Time will tell if there will be new attacks given as the hearing commences, but CNN has already made their opinion clear before the first word was spoken.

These Democratic approved attacks were sponsored by Google and Nutrisystem. Click on the links to let them know what you think.

ALISYN CAMEROTA: Confirmation hearings begin this morning for judge Amy Coney Barrett's nomination to the U.S. Supreme Court. Joining us now, CNN's chief legal analyst, Jeffrey Toobin, and political director David Chalian. To get to even more news on this busy Monday morning. Jeffrey, today is opening statements. And we do have judge Barrett's opening statement. I want to read a portion for you and have you comment for us. She says ‘Courts have a vital responsibility to enforce the rule of law critical to a free society, but courts are not designed to solve every problem or right every wrong in our public life. The policy decisions and value judgments of government must be made by political branches elected by and accountable to the people. The public should not expect courts to do so and courts should not try.’ When you parse that, does that spell doom for the Affordable Care Act?

JEFFREY TOOBIN: I think more specifically spells doom for Roe v. Wade, because it suggests that issues like abortion, like gay rights should be decided by political branches of governments, ones directly accountable to the people. The code there is don't expect the courts to enforce rights. If there are rights to be enforced, it should be the political branches of government to do it, so it's really more about social issues than about the Affordable Care Act in particular.

JOHN BERMAN: Health care will be front and center, the Democrats will bring it up whenever they can. David Chalian, one other thing that's interesting, I lost count, there are five, six, seven campaigns that will be going on right before our eyes during the hearings with members of the committee who are in tough re-election battles, the chair of the committee, Lindsey graham, his opponent announced raising $57 million in the third quarter, so there are all these campaign story lines.

DAVID CHALIAN [CNN Political Director]: The most junior Democrat on the committee, Kamala Harris is the running mate on the democratic ticket. She clearly already announced she's going to participate remotely from her office there making a clear statement. You remember just last week that she had asked to have Plexiglas installed on the debate stage. Again, health care and the pandemic, front and center. No doubt about that. But John, Lindsey Graham who you noted, his opponent, that's bonkers money. Lindsey Graham, John Cornyn of Texas, Thom Tillis of North Carolina, Joni Ernst of Iowa. Four of the high profile Senate races this cycle, Republicans on the judiciary committee are going to hope to use these next couple of weeks as a real base rallying donation moment to get the grass roots enthused, to get people really excited about the conservative movement and you know how much courts are part of that, getting judges on the court, none higher than the Supreme Court. They hope to use this to actually blunt some of the momentum you're discussing that the Democrats demonstrated.

TOOBIN: Only under one condition, that they don't die because this is a hearing being held in the middle of a pandemic in the middle of a hot spot. Tillis has COVID, Mike Lee has COVID, Lindsey Graham refuses to get tested, Chuck Grassley also on that committee, refuses to be tested. This is so unbelievable that they're doing this. They're three members of the committee, Grassley, Pat Leahy, Dianne Feinstein in their 80s exposing themselves to this virus. The idea they're doing this hearing now is so surreal and so dangerous. I think that's worth mentioning, too.

CHALIAN: Not just doing it as you know, Jeffrey, Mitch McConnell and Lindsey graham want to stop at nothing, not even a pause for a moment of the pandemic. Yes, they restructured layout of the room obviously that the hearing will take place in, but that's literally to the side. The pandemic that the entire country is facing because of how important as you know this political mission is of getting Amy Coney Barrett on the court.

CAMEROTA: And I think we've gotten confirmation that Senator Mike Lee who had tested positive will be there in person.

JOHN BERMAN: I have to tell you, this is once again like the President doing rallies to packed crowds, which serves as a reminder to people he couldn't even protect himself from coronavirus. I know Mike Lee thinks it might send an image of strength, but I think people may look at it as a reminder of the spread of this pandemic.

CHALIAN: Without a doubt. This is the weight around the President and obviously it has an entire impact down ballot. His mismanagement of the coronavirus pandemic for the last eight months and then more specifically if you look at all of the polling in the last ten days, John, his total irresponsibility in the way he handled his own infection with the virus and what that means for how he handled people who were around him such as these Senators that you're talking about right now at the event that rolled out Amy Coney Barrett's nomination, that's gotten such a thumbs down from the public, more so than the general partisan spread we see. It is a real political problem, the way in which they are currently dealing with the pandemic.

TOOBIN: How would you like to be Mike Lee's staffer that has to sit next to him, or Capitol Police officers that have to stand there, or the custodians that have to clean the floor. The idea that they're putting all of these people in literal mortal danger to get Amy Barrett confirmed before the election is just beyond surreal.

CAMEROTA: Senator Ted Cruz I believe is still in quarantine, he said something interesting I think on Friday, David, about the way he thinks, two ways that the election could go. Listen to this.

TED CRUZ [Senator, R-TX]: People are going back to work, if they're optimistic, if they're positive about the future, we could see a fantastic election, [spliced clip] but I also think if on election day people are angry and have given up hope and are depressed, what Pelosi and Chuck Schumer want them to be, it could be a terrible election. We could lose the White House and both houses of Congress, it could be a bloodbath of Watergate proportions.

CAMEROTA: That's interesting to hear him say that out loud, David.

CHALIAN: Certainly is. He framed it as if only people were depressed and angry, it also could be because the Democrats are super-charged and enthusiastic trying to drive Donald Trump out of office. Maybe the reason we see a huge blue wave. Again, that's not the certain outcome of the election, but as Ted Cruz rightfully acknowledges, it is certainly a possibility.

TOOBIN: Look, I'm leaving to Chalian the political predictions. I have been wrong too often. The stakes for the Supreme Court are clear. This is the most consequential nomination in probably two generations. The idea of moving from the most liberal member of the court to someone who will probably be as conservative as Clarence Thomas to a 6-3 conservative majority is something that is going to effect this country for decades to come. And after most of the Senators on that dais are forgotten, Amy Coney Barrett will be a justice deciding issues we can't even envision today and that's going to be of enormous consequence.

BERMAN: David, some of the subtext of Ted Cruz is he may be right, I don't know, maybe it will be an electoral bloodbath, but Amy Coney Barrett will be a consolation to a lot of Republicans, maybe some will think it is worth it.

TOOBIN: Worth it. Absolutely.

CAMEROTA: Jeffrey, David, thank you both very much. Great to talk to you. CNN's special coverage of the Amy Coney Barrett confirmation hearing begins after this short break.