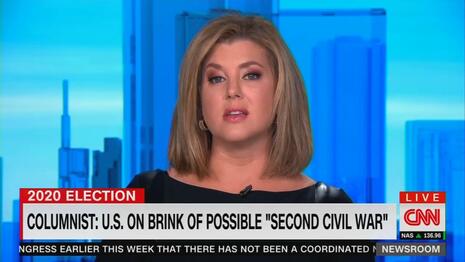 Tom Friedman, a veteran New York Times columnist, appeared on Thursday’s edition of Anderson Cooper 360 with one message: “I'm terrified to find myself ending my career as a journalist covering America's potential second civil war in its history.” This in response to President Trump’s comments questioning the integrity of mail-in voting. Friedman further cried: “The President of the United States has told us, 'I either win the election or delegitimize the election.'”

The leftist media has given a lot of time to the President’s comments, initially made on Wednesday evening, over the past few days, even wildly suggesting the President could use the military to stay in office. White House Press Secretary Kayleigh McEnany stated during Thursday’s press briefing that President Trump will accept the results of a “fair and free election.” This was not enough to satisfy Democratic-aligned media.

The incendiary rhetoric intensified with Friedman declaring: “When you have a President without shame backed by a party without spine amplified by a network without integrity and by social networks in conspiracy theories, behind them are a lot of armed people, if you aren't frightened by this you are not paying attention.”

Cooper abandoned any pretense of journalism as he encouraged his guest, asking him how to stop this from occurring. Friedman responded by begging for America to vote for Joe Biden, campaign for him, and to do anything they could to get him elected, “… if Joe Biden wins the election you have nothing to worry about.” The interview left not even a shadow of a doubt where both hacks stood, on this especially with Friedman clearing stating he would vote for Joe Biden, whatever it takes.

These theories and declarations were not limited to Anderson Cooper’s show. On Friday afternoon, during CNN Right Now, Brianna Keilar showed the clip of Friedman’s comments. Her guest, anti-Trump author Tony Schwartz declared, “I unequivocally share the same worry. We are already in a civil war. We have been in one for quite some time. … the only question is, if Trump loses and if he disputes it and rallies the supporters behind it, will that civil war turn even more violent than it has been already?”

There were further “warnings” given when Schwartz launched into a vile tirade: “Trump's base includes domestic terrorists, people capable of doing very irrational things in the face of feeling thwarted.”

Partisan activists at CNN are the ones is a giving the country an ultimatum: elect Joe Biden or there will be a civil war in this country.

These CNN conspiracies were sponsored by Carvana and Downy. Click on the links to let them know what you think.

A transcript of the September 24 and September 25 coverage is included below:

ANDERSON COOPER: We're keeping an eye on the protests in Louisville stemming from the Breonna Taylor case. This as President Trump continues to claim that the upcoming election won't be honest. "New York Times" columnist Tom Friedman has covered world leaders who have tried to stay in power and author of "Why we need a green revolution" and joins me now. Tom, we played President Reagan's statement when he gave his first inaugural address and the first thing he addressed was the common place nature of the peaceful transfer of power and praised Jimmy Carter for making it so easy to facilitate that. It is something that in this country is commonplace, but overseas where President's dress up in fake military uniforms when they have their families running other branches of government, they don't have peaceful transfers of power. Were you surprised that the President said this? I mean, a lot of people said yes, it's stunning but not surprising.

COOPER: You really believe that?

FRIEDMAN: I think what happened in the last few days is a six alarm fire. I think it's defcon five. The President of the United States has told us I either win the election or delegitimize the election. Those are your choices. And he is basically trying to break people’s will. He's trying to get people to say, what the heck, he wants it so bad, just give it to him. I think this is certainly is the most frightening moment in my life. It's frightening because of him. It's frightening because he's backed by a state-owned network. And it's terrifying, because the Republican party has become basically a political brothel that rents itself out by the night to whoever will energize its base. Whether it was Sarah Palin and the Tea Party, now Trump. This is a party that went into its convention with no platform, just basically said whatever Trump wants, we want. And I -- if you're not frightened now, if you are not terrified for what could happen, it's not we might have a disputed election. It is we are going to have a disputed election, almost certainly, unless Trump wins, in which case I shudder to think what four more years of this would be like.

COOPER: It does -- it is certainly a waving red flag to armed supporters of the president who feel aggrieved, who believe in conspiracy theories, who are showing up already to protests to, you know, guard garages and stuff. It certainly puts them on notice that the President is up for the idea of not having a peaceful transfer of power.

FRIEDMAN: Yeah. I think that you simply cannot count on not only the rules, but the norms. What really governed the country, the words on paper aren't important, but we're learning what is so much more important are the norms that people used to apply those words and that certain things were considered off the table. And what Donald Trump did in the last two days, basically delegitimizing a legitimate form of voting with a virtually zero percent case of corruption, as your previous guests noted. Used by Democrats and Republicans, electing Democrats and Republicans, mail-in voting. He's delegitimizing that, because he thinks he's going the lose. And I think this is just the beginning. This should be breaking news, banner headline on CNN, the New York Times, "The Washington Post" every day. This is all we should be talking about. I promise you on November 3rd and 4th, this is all we will be talking about, and by then, it could be too late.

COOPER: How does this play out in other countries that you've seen? Again, I can't believe we're having this conversation frankly. Because I just can't believe it.

FRIEDMAN: I was -- before I came on, I was reading up about Belarus, this Russian satellite basically, where their President basically cooked the election. He's been in power 26 years, saying the country needs me now. We're in a terrible crisis. And the State Department has made some mild protests. But as a foreign correspondent, that's sort of what you do. You cover those kind of elections and then you call the State Department and you get some statement. Hopefully a strong one that stands up for the principles of self-determination and free and fair elections. That's what I did all these years as a foreign correspondent. Now you have to do it in your own country. The people you want to call, the Justice Department, they're not answering the phone. They're in on the joke. Of course, it's not a joke at all. I just think, you know, one of the most ridiculous statements made by any journalist was after Trump was elected, who excoriated the press for saying, oh, you silly reporters. You took him literally, but his supporters only took him figuratively. You never should have taken him literally. That turns out to be the single stupidest statement anybody ever made because everything Trump has literally said he has done or tried to do. This is a man you should definitely take at his literal word when he talks about these kind of shenanigans.

COOPER: That is the irony of Trump is that the only thing transparent about him is he does say all the stuff that is in his head that he wants to do. He says it on Twitter. He says it out loud. People discounted. They poo-poo it and say don't take it literally but he does speak the quiet stuff people think out loud.

FRIEDMAN: When you have a President without shame backed by a party without spine amplified by a network without integrity and by social networks in conspiracy theories, behind them are a lot of armed people, if you aren't frightened by this you are not paying attention.

COOPER: So happens, what do you do?

COOPER: Thank you very much. Appreciate it.

BRIANNA KEILAR: The President is setting a dangerous precedent using a false pretension, repeatedly claimed if he loses it's because the election is rigged, planted a seed of doubt in supporters about the results before the election happened and it is working.

KEILAR: I know you have spent a lot of time with him as you wrote "The Art of the Deal." You are more familiar than most with his impulses. What do you think is causing him to escalate the rhetoric over the past couple of weeks?

SCHWARTZ: Terror of losing. Literally no more complex than that. He never shows the terror but the terror shows up in his anger and outrageousness. This is, you know -- we are in the 18,000 on the number of lies that Trump has told over 4 years and so this idea that mail-in voting will be fraudulent, all of that is simply one more piece of deceit he hopes pushes people in his direction.

KEILAR: You hear that he has pushed his supporters very much in this direction and convincing them of this imaginary, widespread fraud.

SCHWARTZ: Yes. You know, the one powerful thing that Trump does is repeat. He rinses and he repeats. And so, even if it's not true, even if it's outrageous and preposterous, he will say it so many times to people who want to believe everything he says, who do see him bizarrely but undeniably as a savior, this will -- this is what they want to hear. They want to hear reassure me, the guy that just said a moment ago, it can only be a rigged election. There's no way Donald Trump can lose. That's demented. That's diluted. Even with no preference for one candidate or another we know that either candidate could win so that repetitive style really is effective, especially with his base.

KEILAR: I want to listen to something that veteran columnist Tom Friedman said sounding the alarm about the President's actions.

ANDERSON COOPER: You believe that?

FRIEDMAN: I believe what happened in the last few days is a six-alarm fire. I think it's def-five. The president of the united States has told us either I will win the election or delegitimatize the election. Those are the choices, folks.

KEILAR: Do you agree with that? Do you think that's hyperbolic? He feels it genuinely? Do you share the same worry?

SCHWARTZ: I unequivocally share the same worry. We are already in a civil war. We have been in one for quite sometime. That's the nature of the polarization and we have two very, very divided sides and feel very, very strongly and the only question is if Trump loses and if he disputes it and rallies the supporters behind it will that civil war turn even more violent than it has been already? I do see as others have said, I do see the period between election day and inauguration of the next president as being an especially dangerous period because I do think that the -- that Trump's base includes domestic terrorists, people capable of doing very irrational things in the face of feeling thwarted.