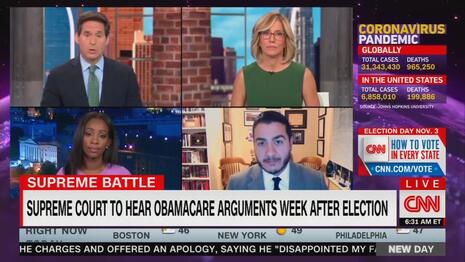 There was not even an honest discussion over the future nominee. Instead, Camerota mocked Republicans: “Spare us the confirmation hearing at that point. If you're going to rubber stamp it, then let's just do that today. Why go through the confirmation hearing?” She bitterly complained over “the naked hypocrisy, the ever-shifting, you know, principles of it.”

The conversation soon went from discussing the nominee to trumpeting Biden’s health care hysteria. Camerota noted that “if the Republicans get their way, very soon, 20 million people who rely on the Affordable Care Act will be thrown off their health insurance.”

Dr. Abdul El-Sayed fretted over the Supreme Court’s impact on ObamaCare: “… The court is set to hear a case that could do that on November 10th, literally a week after the election. If it were to be struck down, all of those people go without their health care.” The other guest of the program, Political Correspondent Abby Phillip, mocked President Trump’s health care plan: “It doesn't exist. I think we can pretty safely say that. … Republicans do not want to run on a plan that's written down on paper that people can see and evaluate and hold them accountable for in the context of an election.” There was no evidence given to back up these accusations during the segment.

Conveniently, none of the massive failures of ObamaCare, like soaring insurance premiums and people losing their doctors, were mentioned during the hackish segment.

Berman and Camerota, instead, purely trumpet the talking points of the Democratic Party, trying to scare voters that they're very health was in jeopardy based on who sits on the Supreme Court. This is not journalism but an extension of the Biden campaign.

This anti-Trump propaganda was sponsored by Liberty Mutual and IHOP. Click on the links to let them know what you think.

A transcript of the September 22 broadcast can be found below:

LINDSAY GRAHAM [R-SC]: The nominee is going to be supported by every Republican in the Judiciary Committee and we've got the votes to confirm the judge, the justice, on the floor of the Senate before the election and that's what's coming.

JOHN BERMAN: That's Senator Lindsey Graham, the Chairman of the Senate Judiciary Committee, who will run the hearings to replace justice Ruth Bader Ginsburg. Abby Phillip and Doctor Abdul Sayed with us. He's right on the vote. Cory Gardner and Chuck Grassley came out overnight saying they support the confirmation process. They will support or they will vote on whoever the president picks. At this point, what open question does that leave, aside from the fact that as Alisyn correctly points out, Lindsey Graham basically said, the Republicans will approve whoever the president puts up without even knowing who it is.

BERMAN: Aside from that, are there any open questions at this point about the process?

ABBY PHILLIP [Political Correspondent]: They would approve a Supreme Court nominee today if they could. I definitely think that that's where Republicans are. And in terms of the open question, I do think it's a question of timing. Do they do it before the election or do they do it after? I think that the vote situation gives McConnell both options. It gets a little bit more tricky, because of that Arizona special election after the election, but ultimately, they have the votes to push this through. And I think it's a question of, do they have the time to do it in the -- you know, I think we're roughly 40-something days before the election at this point. Or do they want to allow their members to have time, especially the ones who are in tough races, to go back to their states and campaign? For some of these embattled Senate Republicans, this is going to be an important vote. It's going to be a boon for their base. But for others, you know, they have tight races. And they want to just survive by not really shaking the boat. And perhaps, a vote after the election would allow them to do that.

CAMEROTA: Dr. El Sayed, obviously, we talk a lot about the politics of this, the naked hypocrisy, the ever-shifting, you know, principles of it. But you're focused, of course, on the health care impact that this will have. And chances are that if the Republicans get their way, very soon, 20 million people who rely on the Affordable Care Act will be thrown off their health insurance.

ABDUL EL-SAYED [Political Correspondent]: It really is devastating. I was the health director in the city of Detroit, and in that city, 50% of Detroiters have access because of Medicaid. The expansion of health care because of the passing of the affordable care act meant that so many more Detroiters newly had access to something that they had struggled to have their whole lives. If you're health care insecure, you might have to worry about what happens if you get sick, your parent gets sick, and all of a sudden you didn't have that anymore. If the ACA were to be struck down. And of course, the court is set to hear a case that could do that on November 10th, literally a week after the election. If it were to be struck down, all of those people go without their health care. And it's really important to see past the numbers here. We talk about 20 million or 200,000 deaths. Each of those people have a story, they have a set of needs, a set of struggles in their life. And all of a sudden, it could mean that health care is one more of those struggles. And we have to remember that there is a real human toll on the back end of these craven political decisions, and those folks, they don't deserve of their health care taken away. In fact, they need more health care. And that's what's at stake here.

BERMAN: Along those lines, they need more health care, Dr. Al Sayed, I want to play Dr. Anthony Fauci again overnight, he was talking about the impact of the virus on young people, so listen to what he says.

ANTHONY FAUCI [Director, NIAID]: More and more young people, you see, when you look at it, are getting into some significant trouble. Not a lot, not a high percentage, that's true. The other thing is that when people get infected, we're seeing more and more of lingering signs and symptoms. You can see things like inflammation of the heart. Now, they may not be symptomatic, but we want to make sure that six months or a year from now, they don't wind up with unexplained arrhythmias or premature heart attacks or cardiomyopathies.

BERMAN: That sounds to me, Dr. El Sayed, that he's describing what will be, maybe for millions of people, pre-existing conditions that, if and when Obamacare is overturned, will no longer be guaranteed to have protection.

SAYED: That's exactly right, John. One of the problems with the ways that the Republican party has seen this pandemic is, they make this assumption. Like, everybody's disconnected. And nothing's connected with itself. The fact of the matter is, it's all connected. Nothing happens in a vacuum. If you get sick as a young person, you may not have a serious disease right now, but we don't know what the long-term consequences are of a disease that we've only had in humanity for like eight months. And so over the long-term, you're right, those could be pre-existing conditions, which if the ACA is struck down, you are no longer eligible for getting health care if you have them. The other part of this is that, yes, young people may not have a serious disease right now, but young people all have older people in their lives that might have more serious diseases. And lastly, I know many young people who have had very serious illnesses with covid-19, and the consequences for the rest of their lives is pretty big for having to take two weeks, a months away to be able to recover. So we've got to stop thinking like it's one group and not the other. All of us are in this thing together. All of us are at risk. And when we cut down on health care, even on the most susceptible, it affects all of us in the midst of a pandemic, because we all live in the same society, and this is a disease that moves from some of us to others of us.

CAMEROTA: Abby, President Trump promised Chris Wallace in that interview in August, July -- July, that he would very soon be releasing his fantastic --

CAMEROTA: -- Health care plan, that was in July. What's the holdup? Where is that?

PHILLIP: It doesn't exist. I think we can pretty safely say that. This has been a promise that the president has been making for more than two years now. If you just count the period right before the 2018 campaign, when he promised a health care plan then as well, and I was covering the White House at the time and remember talking to white house aides who were saying -- they're saying privately to me, there is not going to be a health care plan released before an election. Why? Because Republicans do not want to run on a plan that's written down on paper that people can see and evaluate and hold them accountable for in the context of an election. So this is just something that he dangles on the end of a string to counter arguments that there is no plan for when -- if or when the Affordable Care Act might be struck down by the courts. But it does not exist. Because if it did exist, it wouldn't be released in the last month of the campaign. It would have been released months ago. And, you know, I think that it's -- you know, to Dr. El Sayed's point, this is more than just politics. The President dangling this prospect out there and not being up-front with the American people about what his plans are is a real problem for many Americans who want to know what their lives are going to look like under a second term in the Trump administration, versus a first term of a Biden administration.

BERMAN: More uncertainty is very hard for people now given the current circumstances. Dr. El Sayed, Abby Phillip, thank you both so much for being with us this morning.