Ever since the tragedy at Sandy Hook Elementary in December 2012, the hosts at MSNBC have been on a gun control crusade, boosting Democrats' push for fresh gun restrictions.  One of the focal points of MSNBC’s gun control advocacy has been pushing for a ban on what MSNBC calls “military-style assault weapons.”

Well, yesterday,  Senate Majority Leader Harry Reid told reporters he'd scrapped California Democrat Dianne Feinstein's assault weapons ban for lack of votes. The Nevada Democrat noted he only had at most 40 votes out of 53 Democrats and two Democrat-caucusing independents. In other words, Republican votes are a non-factor, since the Democratic caucus is hardly sold on the idea to begin with. Yet the very next day, MSNBC’s Alex Witt allowed Senator Richard Blumenthal (D-Conn.) to essentially blame the GOP and the NRA for the setback to the Left on gun control.  [See video after jump.  MP3 audio here.]

Witt introduced the interview with provocative language to show her dissatisfaction with Reid’s decision:

Do you agree with Senator Feinstein about the power of so-called enemies? Is this what happened here?  Is this what made Senate Majority Leader Harry Reid reverse his promise to bring this bill to the Senate floor?

Blumenthal then played right into Witt’s agenda by going further:

You're right, Alex, to describe this assault weapon ban proposal as the most ambitious. We always knew it was going to be an uphill fight. We always knew that the opponents were staunch, ruthless and relentless.

Nowhere in this segment did Witt or Blumenthal feel it appropriate to mention that Reid’s decision to drop the assault weapons ban was because he did not even have 40 Democratic votes let alone the 60 needed to end debate on the Senate floor, or the 50 needed to bring about a tie which Vice President Joe Biden could break in favor of passage.

Instead, Witt allowed Blumenthal to put the blame at the feet of the “staunch and ruthless” opponents, or the GOP and NRA.  Senator Reid, an NRA-approved Democrat who himself has said he has doubts about supporting an assault weapons ban himself, couldn’t muster up enough Democrats to support his cause, many of whom support gun-rights.

Witt would have done her audience a service by mentioning this important detail rather than continuing to push the MSNBC's preferred but factually-deficient meme on gun control. 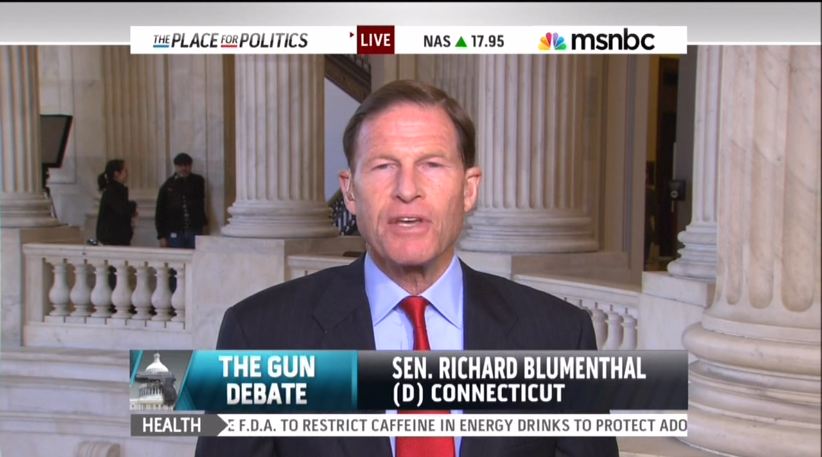 ALEX WITT: Joining me now Senator Richard Blumenthal a Democrat from Connecticut. And Senator, it's very good to see you. Thank you for joining me.

WITT: I'd like to look at the cover of "The Daily News" right here in New York in which we have reaction to Senator Reid’s announcement. It shows the pictures of the victims of Sandy Hook Elementary. Right there in the center, "shame on U.S." Senator Blumenthal, what happened here? And do you agree with Senator Feinstein about the power of so-called enemies? Is this what happened here?  Is this what made Senate Majority Leader Harry Reid reverse his promise to bring this bill to the senate floor?

RICHARD BLUMENTHAL: You're right, Alex, to describe this assault weapon ban proposal as the most ambitious. We always knew it was going to be an uphill fight. We always knew that the opponents were staunch, ruthless and relentless. And Harry Reid has done what may be the smart tactical move which is to separate the assault weapon ban so we can move forward on prohibitions against illegal trafficking, straw purchases, and also achieve a background check on all firearm sales as well as very likely a strengthening of those background checks by including information that is not right now in the database. So there are measures that still can be considered. But Dianne Feinstein is right that these opponents have won -- at least an initial round. But not giving up hope or the fight. We can offer it as an amendment on the floor.

RICHARD BLUMENTHAL: I think we will see bipartisan support for some of these measures like illegal trafficking and straw purchases prohibition. Possibly even for a ban on high-capacity magazines. That is the clips that contain more than 10 rounds which were so integral, as you know, to the Newtown massacre. The children there, a number of them were able to escape because the shooter had to change magazines. If there were smaller numbers of rounds in those clips, maybe more could've escaped and like wise in the shooting in various other places.

RICHARD BLUMENTHAL: Aurora, Colorado, Tucson, a young girl might still be living if the number of rounds had been limited to ten. We need to continue this fight and your point, I think, is really preeminently important because the American people are behind these measures. The American people are on our side. 80%, 90% of the polls show they are behind even the assault weapon ban. So we need to mobilize and organize that feeling among the American people that we need to do something about gun violence and no single state can do it alone. There's no single solution.

WITT: Well, interesting, though, you bring up the states. Because if you look at the state of Colorado. Governor Hickenlooper just signed three gun control bills today just a day after the executive director of the Department of Corrections was shot and killed as he opened the door to his home last night. The bills ban ammunition magazines with more than 15 rounds. What we were just talking about here. They require universal background checks for the gun buyers, they also require gun buyers to pay for their own background checks. You have Colorado joining New York now passing these aggressive gun bills since the tragedy at sandy hook. Do you think ultimately it’s going to be up to the states to get something done given the gridlock in Washington?

RICHARD BLUMENTHAL: Ultimately we need a national solution. Illegal trafficking of guns that go to the streets of New York or Denver know no respect for state borders. They will be trafficked across those borders. The borders are porous. So handguns, even assault weapons can be brought from New York to Colorado and vice versa from North Carolina all across the country. And the national background check has to be national. It has to be done with a data base that collects information on people who are mentally ill, people who are convicted of serious crimes, people who are domestic abusers from all states around the country. And some of the opponents make a good point that we need stronger national and more aggressive enforcement. That has to be done nationally too. So no single state has the answer.