On Thursday’s edition of her Now program, MSNBC host Alex Wagner and her colleague Lawrence O’Donnell along with The Nation’s Ari Melber took to the air to smear the conservative American Legislative Exchange Council (ALEC) on the subject of voter ID laws.  ALEC, a liberal blogger bogeyman, has become MSNBC’s new punching bag and the liberal guests took the opportunity to attack the organization from all sides.

In a discussion regarding the merits of showing an ID to vote, Wagner, an alumna of the liberal Center for American Progress, conspiratorially claimed that, “voter ID is cooked up by Republicans to disenfranchise minority voters.” In other words, it's the work of evil, racist Republicans!  [See video below.  MP3 audio here.]

Conservative panelist and syndicated columnist S.E. Cupp did her best at combating the vicious assault on ALEC and voter ID laws:

We can all agree voter fraud happens. We disagree on how often it happens. That's fine. But if it happens once, it happens too often.

<<<This sort of bias is not at all acceptable. Help us combat it by giving your tax-deductible gift at newsbusters.org/donate today.>>>

In response to this, MSNBC host Lawrence O’Donnell ridiculously claimed that a few instances of voter fraud are perfectly fine with him:


CUPP: Alex, people die fighting overseas for our right to vote. If it happens once it happens too often.

O’DONNELL: No, no once is perfectly reasonable.

CUPP:  What's the solution to voter fraud? Give me another solution.

O’DONNELL: Once is perfectly reasonable.


This candid and disturbing response from a former Democratic senatorial staffer raises serious questions about whether or not Democrats believe in fair and honest elections.  It appears the hyper-partisan O’Donnell does not.

What is more disturbing is the assertion made by liberals Wagner and O’Donnell that if you support voter ID -- which 70 percent of Americans do according to polling data -- are somehow racist.  Wagner doesn't have the audacity to openly attack the vast majority of Americans, so ALEC stands in as a convenient villain. 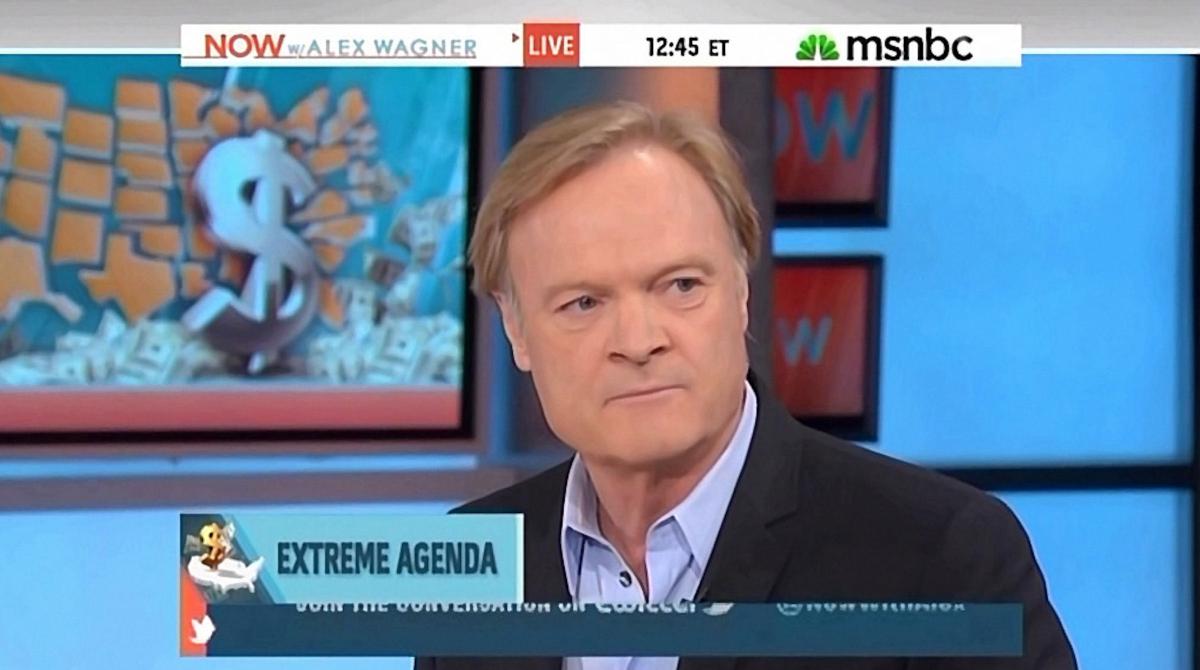 ALEX WAGNER: After getting dropped by some of its most prominent corporate funders the American Legislative Exchange Counsel, or ALEC decided to shut down a task force that helped enact controversial stand your ground laws and voter i.d. laws. But its opponents called the move nothing more than a pr stunt. As usual, I will quote the "Wall Street Journal " in an editorial from yesterday.  This was amazing to me. The ugly race-baiting anti-ALEC campaign is typical of today's liberal activism. It's akin to the campaigns to smear libertarian donors Charles and David Koch, and to exploit shareholder proxies to stop companies from giving to political campaigns or even the Chamber of Commerce.  This is a ugly race-bating anti-ALEC campaign.

LAWRENCE O’DONNELL: I think the thing with at "Wall Street Journal," is they believe no one reads our editorials. What are we going to do. And so they just do this crazy amped up language that has nothing to do with the rest of the news paper.  They’re kind of funny their editorials.

WAGNER: Well, but S.C. [Cupp], as a conservative, do you think it was, you know Color of Change, a statement from April 17th.  In the statement from April 17th, I’ll read it.  To simply say they are stopping noneconomic work, this is in response to ALEC stopping its task force, doesn't guarantee that ALEC will not continue to push laws that endanger African-Americans and trample our voting rights. Shutting down one task force does not provide justice to the millions of Americans whose lives are impacted by these dangerous and discriminatory laws courtesy of ALEC and its corporate backers.

S.E. CUPP: Courtesy of governors like Janet Napolitano and Jennifer Granholm, are they racist? I mean, to smear and entire segment of the population as racist and discriminatory because you disagree with laws that are on the books --

WAGNER: The laws they say...I think It's the laws that they're calling discriminatory.

CUPP:  Sure, signed into law by some Democratic governors as well. And they're not taking it to Janet Napolitano and Jennifer Granholm.

ALICE STEWART: Of course not. Because this is prompted by as we all know Obama’s former green jobs czar, Van Jones, and this is more of his effort to fight against any free market policy groups, which is ALEC is very big on that. But also one of the big things they're attacking is the voter i.d. laws which is most people support. But for them to say that it's racist to require people to show an i.d. to vote is simply wrong. I mean we have to show i.d. for many things in this country. And voting is a very important privilege people in this country have and they should be required to show i.d.

O’DONNELL:. It's sitting here and watching Ari listen to this, listen to things that I –and  it's like I'm watching him not fume.  It’s like he has this ability...

WAGNER: It’s an exercise in self-control.

O’DONNELL: But I can see the temperature rising and somehow he doesn’t...

O’DONNELL: I think he has something to say.

ARI MELBER: Thank you, Alex and Lawrence O’Donnell. Yeah, well I felt my temperature rising because there was a lot to deal with. Number one, there is a --

O’DONNELL: Take your time. You have my time.

WAGNER: The gentleman on the left.

MELBER: Number one, the laws that are in question do have a tremendous disparate impact on not only African-Americans, but also the poor, the elderly, generally the marginalized in our society. So there's a reason why many people across the political spectrum are concerned about voter i.d. laws. That’s number one and that is the racial component there.  Number two, contra to the Wall Street Journal’s imagination, this is the free market. This is what it looks like. When a company like Coca-Cola gets feedback from its shareholders or what it considers customers, potential customers or stakeholders that they don’t like something the company is doing, they look at a cost benefit analysis. And what they see is a $25,000 check to ALEC that is engaged in many of these questionable activities which some people support and some people don't. But it's questionable enough that as a company, not as a political group, as a company, they say this is so outside the mainstream of people who drink Coke, that’s what they  think about, they want out. That is the free market. It's also the politics of that.

CUPP: You're right. That is an excellent point. It's a free market experience that you're seeing here.  But to look at voter i.d.  laws, which as Alice pointed out, majority of the country supports, they've passed in 30 states now, not that questionable. Here is my issue --

WAGNER: The Supreme Court is taking it up.

CUPP: Absolutely, absolutely. But this is my issue with it. We can all agree voter fraud happens. We disagree on how often it happens. That's fine. But if it happens once, it happens too often...

O’DONNELL: It happens less than speeding.

CUPP: It happens too often if it happens once. So what's the solution?  If you don’t like voter i.d. that's fine. Bring me another solution. The point is people don't want the solution to this problem.

WAGNER: Voter i.d. is cooked up by Republicans to disenfranchise minority voters.  There is more chance that you will get hit by lightning I think on a plane, actually that would be increasing your chances, there’s more likelihood of you getting hit by lightning twice I believe than for voter fraud to happen.

CUPP: Alex, people die fighting overseas for our right to vote. If it happens once it happens too often.

O’DONNELL: No, no once is perfectly reasonable.

CUPP:  What's the solution to voter fraud? Give me another solution.

O’DONNELL: Once is perfectly reasonable.

CUPP: Give me another solution to voter fraud.  I’m happy to listen to it.

STEWART: Exactly.  But what Color of Change is doing, they're picking hot-button and stand your ground.  These are hot button issues that they see that can generate conversations of a few of the many things that ALEC does, most of which is educate legislators across the country on how to better write legislation dealing with free market and reducing the size of government.   That’s what ALEC does and that's what it stands for and Van Jones is doing nothing more than...


STEWART: Furthering the Obama administration's agenda to silence those who go against that.