On Monday’s edition of ABC's The View, Georgetown Law student Sandra Fluke appeared on the show on what was essentially a 5-minute monologue for her to distort the contraception debate.  The "exclusive" interview with Sandra came in response to Saturday’s apology issued by Rush Limbaugh over controversial language he used to describe the student.

Fluke was given the opportunity to respond to Limbaugh’s apology but rather than accept it, she instead went on the attack, “No, and let me be clear that I think his statements that he made on the air about me have been personal enough so I'd rather not have a personal phone call from him.”  [See video below.  MP3 audio here.]

In response to a softball question by Joy Behar asking her to name names of others who have used "derogatory statements" about her, Fluke enthusiastically told the audience to go to the liberal website Media Matters.

The View along with the rest of the liberal media has decided to portray Fluke as a victim and as in the words of Elizabeth Hasselbeck, “advocating for women.”

Despite the fact that Fluke's own testimony and subsequent statements are filled with inaccurate information, no one in the media has once asked her to defend any of her ridiculous statements such as, “The idea that it's about taxpayers or the government paying for contraception and it is absolutely not.”  The last time we checked, those private individuals paying private insurers are still taxpayers despite Fluke’s false claims.

Below is the relevant transcript. 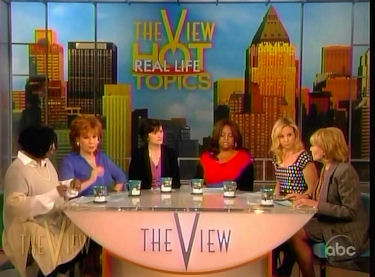 BARBARA WALTERS: The woman at the center of a firestorm of controversy is a "View" exclusive right now. On February 23rd, 30-year-old Georgetown University law student, Sandra Fluke, testified before Congress that the President's health care bill must include coverage of contraceptives saying that the out-of-pocket cost is too big a financial burden for female students and she was speaking about her own college. Last Wednesday radio host Rush Limbaugh lashed out at her in, well, take a look at what he said.

WALTERS: So what you were talking about was the fact that your own university does not include this in the health insurance, right?

SANDRA FLUKE: Yes, I was sharing stories of women who attend my university who've been unable to access contraception as a result of the lack of insurance coverage and the types of dire medical consequences they've suffered as a result of that. One woman lost an ovary, things like that.

WALTERS: Sandra, when you first heard this, what did you think? Can I call you Sandra, first of all.

FLUKE: You may, thank you. Well, initially I was, of course, shocked and stunned. I think any woman who has ever been called these types of names is at first, but then I tried to see this for what it is and I believe that what it is, is an attempt to silence me, to silence the millions of women and the men who support them who have been speaking out about this issue and conveying that contraception is an important health care need that they need to have met in an affordable, accessible way.

WALTERS: You know, he has -- as you know, has since issued an apology to you. Hasn't called you but --

JOY BEHAR: He has not called you?

FLUKE: No, and let me be clear that I think his statements that he made on the air about me have been personal enough so I'd rather not have a personal phone call from him.

WALTERS: I mention it because President Obama did call. He has apologized and I have been asked to read a statement which he didn't give to us but which he gave in general. “For over 20 years I've illustrated the absurd with absurdity three hours a day five days a week and this instance I chose the wrong words in my analogy of the situation. I did not mean a personal attack on Miss Fluke. I think it is absolutely absurd that during these very serious political times we are discussing personal sexual recreational activity before members of Congress. My choice of words was not the best and in the attempt to be humorous, I created a national stir. I sincerely apologize to Ms. Fluke for the insulting word choices.” Do you accept his apology?

FLUKE: Well, let me just say this and I encourage everyone to look at the statement in its entirety online but what I have to say is that I don't think that a statement like this issued saying that his choice of words was not the best changes anything. And especially when that statement is issued when he's under significant pressure from his sponsors who have begun to pull their support from the show.

BEHAR: Do you think he should be fired?

FLUKE: I’m going to leave that up to the sponsors, up to Clear Channel Communications and to the members of the American public who support those companies and what I'll just say is that Americans have a long tradition of supporting companies that share the values that they have and I'm sure that they will continue to uphold that tradition.

HASSELBECK: What exactly did the president say to if you don't mind me asking because I think it's incredible that he extended.

FLUKE: Yes, it was very kind and I came away from it thinking he was such a kind man. He offered his concern, wanted to make sure that I was doing all right and wanted to express his support and thank me for speaking out on what he considers to be an important matter of public policy and what I think millions of American women know is an important matter of public policy.

WALTERS: Your school has not changed its policy in spite of your --

FLUKE: It has not but they did issue a statement in support of me regarding this type of problematic rhetoric and I appreciated that very much.

BEHAR: But paying someone to have sex, when he's on Viagra which I know he is. He was caught at the airport with someone else's prescription of Viagra, aren’t, isn't that the same thing for him? I mean, the hypocrisy is incredible also on top of everything else. But you have said that other people have made derogatory statements about you also. You want to name some names.

FLUKE: Well, I would encourage everyone to go to Media Matters. They have an excellent story on their website that gives a list of the various commentators who engaged in this type of language, Glenn Beck for one.

FLUKE: And I think it is really important for us all to understand this was not one person who went crazy and made funny, outrageous statements. This is evidently a segment of our political commentators who think that it's acceptable in today's society to say these things about women.

HASSELBECK: Do you take the stance on it because this happens -- I don't listen to Rush. This is really the first time I heard him say that and it's repulsive. Do you feel the same about the commentators we mentioned earlier on the show who are -- in the same way attacking women all the time with their misogynistic remarks.


FLUKE: I think it's unacceptable no matter who is saying it and no matter what side of the issue they're on but I do think that we have to be nuanced and being nuanced is not inaccurate, it’s more accurate. Because I think, Whoopi, I heard what you were saying at the beginning. I think you're doing a disservice by comparing yourself. Because this was not someone who made one accidental statement. This was three days of significant portions of his three-hour show. He insulted me and the women of Georgetown who have received no apology. He insulted us over 53 times.

SHERRI SHEPHERD: Sandra, before we go, I want to ask you because there's a lot of people who say they don't think that birth control should be covered under health care.

SHEPHERD: Especially with universities, as well. What would you say to these people?

FLUKE: Well, I want to correct the misperception which Mr. Limbaugh and a lot of other commentators have been putting out there to confuse the public. The idea that this is about taxpayers or the government paying for contraception and it is absolutely not. This regulation covers private insurance and it wants to have this type of medical drug treated in a way that's similar to how other medical drugs are treated and it is health care. Women need this medication to prevent seizures, to prevent cysts from growing on their ovaries. I’ve heard from so many women who’ve  talked about why they need this critically not to mention the important medical need of preventing unintended pregnancies.

WALTERS: Whether people agree or do not agree with you, it took great courage and again to point out you're not talking about taxpayer money. Thank you for coming on "The View " and talking about it.  We appreciate it.