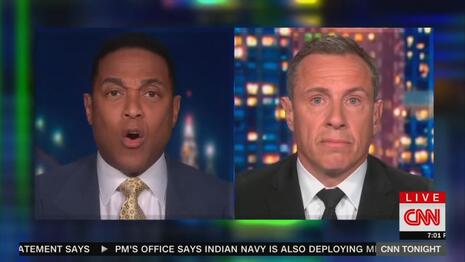 So over there at my old stomping grounds at CNN, my own former Pennsylvania United States Senator Rick Santorum and my former CNN colleague Don Lemon got into a dust-up.

To be clear, I know and like them both, and yes, have voted for Rick every time he was on the ballot. And yes, I bought Don’s recent book This Is the Fire: What I Say to My Friends About Racism. and am reading currently.

I should begin with a recounting of exactly what took place.

Speaking to the Standing Up for Faith and Freedom conference, this was what drew attention. Said Rick:

It was born of the people who came here pursuing religious liberty to practice their faith, to live as they ought to live and have the freedom to do so. Religious liberty. Those are the two bulwarks of America. Faith and freedom.”

Most nations, he said, "changed over time," but America had not from the time Europeans came here and built the country “from nothing.”

Asked on Chris Cuomo’s show to discuss what he said, Chris said this to Santorum: “This seemed like you were trying to erase diversity in the interest of some White Christian right.”

To which Santorum responded this way, bold print supplied for emphasis:

The Cuomo show is followed by Don Lemon’s show, and the two have a folksy, palsy routine when the first show host hands off to the second show host. On May 3 though, it wasn’t so palsy. Don Lemon was clearly incensed:

“I was furious watching that interview in my office. I cannot believe the first words out of his mouth weren’t I’m sorry, I said something ignorant, I need to learn about the history of this country. No contrition, didn't talk about the suffering that Native Americans have had to deal with in this country.”

Shortly thereafter there were stories that Don Lemon wanted CNN to fire Rick Santorum. Where to begin?

This dust up isn’t about Native Americans. It is about race. In this case it’s really about the leftist media  and race. Having had my own dust up with Don on the subject while on CNN I know exactly where he comes from on the subject, and as mentioned, am currently reading his book.

I have said this myself on CNN in more general terms -- doubtless adding to my unpopularity there as I learned as time went on. But in this case my point should apply specifically to the liberal media across the board, since in fact the liberal media is merely a reflection of the larger leftist movement itself.

As I have noted repeatedly, the Democratic Party -- home base for most of today’s left - was in fact founded as The Party of Race. Historian and Northwestern University Emeritus Professor of History Garry Wills (and he is far from alone) has written in detail about race as the building block of the party’s political power and its culture.

In his book Negro President: Jefferson and the Slave Power, Wills focuses on Thomas Jefferson, the founder of the Democratic Party, and Jefferson’s -- and his party’s -- reliance on the slave states and race -  racism - to create and maintain the party’s political power.

For Rick Santorum to be a CNN contributor and have the nerve -- the nerve! -- to speak up for, as he said, “the Constitution, the Declaration of Independence, and the ideas behind those” is the equivalent of waving a red flag in the face of watching leftist bulls. To support, as did Dr. King, one of those ideas behind that Constitution and Declaration of which Santorum spoke -- the  concept of a colorblind America where Americans are judged not by “the color of their skin but by the content of their character” -- is now routinely dismissed by the left.

In its place is the modern version of the segregationist doctrine that is and always has been at the core of the party and its followers -- identity politics.

What happened here in this Santorum-Lemon dust-up is merely the tip of the iceberg with a left wing media that is obsessed with race. And worse, that media has not the slightest awareness of just how much they sound like George Wallace.

Is that irony? Yes, irony too thick to cut. But in fact it’s more than that.

This is nothing less than the divisive, obsessive 200-plus year old race-based culture of one political party infecting 21st century liberal media.

Over there in Breitbart recently was this piece on Glenn Loury. Loury, an African-American, is an “Ivy League economics professor and host of video blog The Glenn Show.” The headline: "Ivy League Professor: Teaching Identity Politics is ‘Criminal Abdication’ of Teachers’ Responsibilities."

Exactly. And, it would seem, when the liberal media pushes the self-same cancer of identity politics, and attacks Rick Santorum for opposing it, that would be the liberal media version of ‘Criminal Abdication’ of journalistic and media responsibilities.