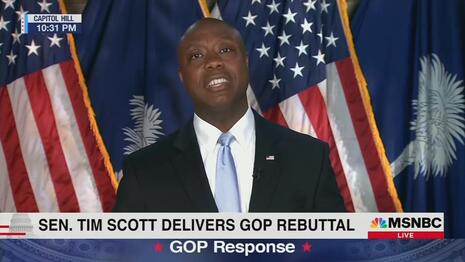 Fox News stated the problem exactly. What is the problem? Here's their headline:

The very first three paragraphs (underneath a photo of The View’s far-left Joy Behar) read this way:

Scott, the lone Black Republican in the U.S. Senate, infuriated progressives with his speech, which included remarks that the United States isn't a racist country. After his rebuttal, "Uncle Tim" trended on Twitter, a play on the "Uncle Tom" slur for Blacks viewed as overly deferential to Whites.

Yet the primetime shows on liberal cable outlets CNN and MSNBC ignored the attacks Thursday, as did "CBS Evening News" and ABC's "World News Tonight." CNN and MSNBC's websites also both skipped the racially charged story, as did the New York Times. The network's morning shows also skipped the story Friday morning, according to a transcript search.”

Shocking, yes? Sadly, no. Not only not shocking but this overt racism from the liberal media is completely reflective of the larger left itself.  Outrage from the Black Lives Matter crowd? None as of this writing. The NAACP? Nada.

In fact, in the case of the NAACP,  a visit to their website reveals this headline as this is written:

STAND UP FOR EQUALITY

Today and every day, the NAACP is at the forefront of the movement to build political power and ensure the wellbeing of Black communities.

Obviously the NAACP has zero intention of standing up for a black United States Senator who has been viciously targeted with racial slurs because…because? Because Senator Scott is a Republican. A conservative who has had the guts to leave the liberal plantation.

The Senator appeared on Fox and Friends after the assaults on his race had been launched, saying this:

“Intolerance so often comes from the left with words like 'Uncle Tim' and the 'n-word' being used against me,” Scott said. "And last night what was trending in social media was 'Uncle Tim,' and they doubled down on this concept of liberal oppression. It is stunning in 2021 that those who speak about ending discrimination want to end it by more discrimination."

“Their America and my America aren't the same America, if in fact they think that discriminating is the fastest way to end discrimination," Scott said.

“Racism and discrimination: it's still real, but it is being pushed further and further into a smaller corner in our nation. That's great news that we should celebrate," he added. "If you want to be an American, the door is wide open, the front door by the way, is wide open to come in and add value to who we are, not be part of destructive conversations that belittle individuals."

There is a serious message here in this outright racism directed at Senator Scott from the liberal media and the larger left-wing. And that message has been seen and heard before.

Bush went along, and nominated Judge Thomas. Abruptly, Hooks, the NAACP and every other left-wing group came out swinging against Judge Thomas. The New York Times quickly joined in,

Why? As Justice Thomas himself said in the documentary:

“Do I have like stupid written on the back of my shirt? I mean come on. We know what this is all about. People should just tell the truth: 'This is the wrong black guy; he has to be destroyed.' Just say it. Then now we're at least honest with each other. The idea was to get rid of me. And then, after I was there, it was to undermine me."

And some version of what happened to Justice Thomas has been directed at one black conservative after another. It could be Dr. Ben Carson, author and commentator Deneen Borelli, activist Candace Owens. If he runs for the US Senate in Georgia the target will be Hershel Walker. Democrat-turned-Republican Vernon Jones, now running for governor of Georgia faces this.

The reality needs to be called out. The reason for the liberal media silence on the racist slurs hurled at Senator Tim Scott is because the American Left believes it politically owns black Americans. And if, like Senator Scott and all the rest, they have the audacity to think for themselves they are made a target for the ugliest outright racial attackes - and the liberal media mysteriously falls silent.

It is a disgrace. Three cheers for Tim Scott for standing up and fighting back. Enough…is enough.