The Twitter Censors Come for Mike Lindell; Are You Next? 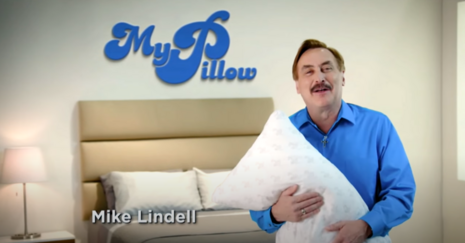 The My Pillow man is vaporized. Gone in less time than it takes to fluff Mike Lindell’s famous product. He has been "permanently banned" from Twitter. Here's NPR:

Twitter has suspended Mike Lindell, the CEO of My Pillow, from the social media platform. He had been using his Twitter account to spread disinformation about the 2020 election, including false claims of voter fraud and election rigging.

Lindell's account was "permanently suspended due to repeated violations of our Civil Integrity Policy," a Twitter spokesperson told NPR. It was not immediately clear which posts from Lindell led to his removal from the social media platform.

Lindell is a close ally of former President Donald Trump and visited the White House during the final week of Trump's administration.

What was Mike Lindell’s offense? Why, the man had the audacity --- the nerve!! --- to support former President Trump and to say what he thinks about the 2020 election results.  And with Twitter going out of its way to cancel the ex-president himself, how tough is it to cancel one of his most prominent supporters?

On top of this, corporate America has piled on. Companies run by leftist executives have abruptly pulled the My Pillow products from their stores. One of the suddenly anti-My Pillow stores is Bed Bath and Beyond. Over there at The American Spectator, I took a look at the people who compose the box store’s corporate team and found exactly what I thought I would find.

That would be the presence of an “Independent Chair” of the corporate board who, shocking I know, is “a 12-time contributor to everything from the Trump-hating Lincoln Project ($1000 and $500) to Biden for President ($2800 and $500) to Democrat senators Doug Jones of Alabama and Ohio’s Sherrod Brown.”

Then there’s the case of one Cara Dumaplin. Call me uninformed and not with it, but Ms. Dumaplin is what is known as a “Mommy Blogger.” She runs this deeply nothing-to-do-with politics site takingcarababies.com called, with a play on her name, “Taking Cara Babies.” The site says: “We help babies get sleep online sleep classes and resources for newborn to two-year-olds”

Breitbart clued the rest of us into a bit of her profile.  Here’s the description of Dumaplin’s self-created successful business enterprise:

“Phoenix-based Dumaplin has run an online company called Taking Cara Babies since 2013. She enjoys 1.3 million Instagram followers and appears to specialize in helping new mothers get their babies to sleep. Have these new mothers never heard of whiskey?

According to her biography, Dumaplin is a “mom of four, neonatal nurse, wife of a pediatrician, and a certified pediatric sleep consultant.” She’s also enjoyed a presence on such mainstream outlets as Good Morning America and People Magazine.”

Innocent enough, right? Ahhh. But in the current cancel culture madness? Here is the story from the left-wing Vox: The story says this:

“On January 19 and 20, parenting forums and new mom group chats lit up after word began spreading on Twitter, Instagram, and Reddit that Dumaplin and her pediatrician husband had donated in total around $2,000 to various Trump campaigns in 2019 and 2020, according to Federal Elections Commission data. Parenting influencers like Jamie Grayson spread the screenshots on Twitter and Facebook, where they percolated among progressive parents. Author and screenwriter Bess Kalb, for instance, tweeted ‘OH MY GOD TAKING CARA BABIES IS MAGA.’”

The shriek for a boycott went up. Here’s the headline from The Federalist: "Taking Cara Babies Founder Is Bullied And Doxed For Privately Supporting Trump."

Meanwhile The Washington Post has joined with CNN in calls to de-platform Fox News. Here’s a headline: "Fox News is a hazard to our democracy. It’s time to take the fight to the Murdochs. Here’s how."

"Corporations that advertise on Fox News should walk away, and citizens who care about the truth should demand that they do so (in addition to trying to steer their friends and relatives away from the network).”

Sullivan sweetly links to a list of Fox advertisers. There was another, similar, call at The Post to take Fox off the air. And not to be outdone, the paper pushed a call to deny Trump the standard presidential after-office routine of a presidential library. There isn’t enough space on the Internet to publish all the stories out there about Big Tech/Big Media/Big Corporation far left cancel culture gone wild.

But it is time --- more than time --- to stand up and bring a full stop to this craziness. On Friday, Sean Hannity reported on his radio show that Lindell boycotter Bed Bath and Beyond had its stock collapse by a stunning 36% as a direct result of BBB’s ostentatious boycott of My Pillow. This is not about pillows or how to take care of babies or Fox News or building presidential libraries. This is about free speech. And if this fascist cancel culture is not protested and stopped in its tracks, it will only get worse.