00:00 00:00
Font Size
This isn’t journalism, it’s left-wing activism.
So this past week The New York Times is under fire - from its own staffers. Why? For publishing this Op-Ed by Senator Tom Cotton (R-Ark).    The column was headlined this way:

Send In The Troops
The nation must restore order. The military stands ready.

Among other things, Senator Cotton noted that: 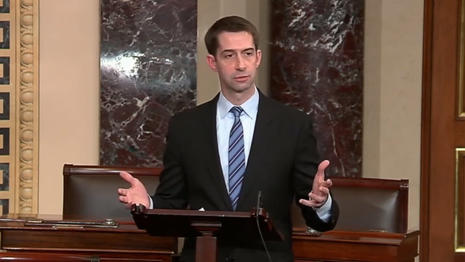 For instance, during the 1950s and 1960s, Presidents Dwight Eisenhower, John Kennedy and Lyndon Johnson called out the military to disperse mobs that prevented school desegregation or threatened innocent lives and property. This happened in my own state. Gov. Orval Faubus, a racist Democrat, mobilized our National Guard in 1957 to obstruct desegregation at Little Rock Central High School. President Eisenhower federalized the Guard and called in the 101st Airborne in response. The failure to do so, he said, “would be tantamount to acquiescence in anarchy.”
More recently, President George H.W. Bush ordered the Army’s Seventh Infantry and 1,500 Marines to protect Los Angeles during race riots in 1992. He acknowledged his disgust at Rodney King’s treatment — “what I saw made me sick” — but he knew deadly rioting would only multiply the victims, of all races and from all walks of life.

And for recounting this quite factual history in a call to bring in federal troops to restore order to cities now being ravaged by looting and burning? A looting and burning that has, along the way, resulted in the murder of retired St. Louis Police Captain David Dorn - a black man killed on a Facebook Live streaming - by a looter? Not to mention the murder of Dave Patrick Underwood, a black federal security officer in Oakland.
And other African-Americans?
For all of this the woke progressives of The New York Times threw a temper tantrum worthy of a five year old and definitely unworthy of serious journalists. As NB's Curtis Houck noted this week:

Incredibly there was zero recognition that had federal troops been mobilized in St. Louis and Oakland it is possible both Captain Dorn and officer Underwood would still be alive. Apparently not all black lives matter with woke progressive liberals at The Times.
Once upon a time The Times loved it when Presidents sent in the troops.
On September 24, 1957 The Times lavished favorable press on Dwight Eisenhower when he sent troops to enforce the desegregation of Little Rock’s Central High School. The headline:

In October of 1962, President John F. Kennedy sent federal troops to Oxford, Mississippi to protect James Meredith as he sought to become the first black student to enroll in the University of Mississippi. As seen here on You Tube.
In May of 1963, race riots broke out in Birmingham, Alabama. The Times headlined:

Famously, in June of 1963 in Alabama, President Kennedy federalized the state’s National Guard and sent them to Tuscaloosa and the University of Alabama. Deputy U.S. Attorney General Nicholas Katzenbach confronted Alabama Governor George Wallace as Wallace literally stood in the school house door of the University of Alabama refusing to admit that schools first two black students, Vivian Malone and James Hood. Eventually Wallace yielded.
In each case? The New York Times loved it. As it were, the thousands of federal troops were there at both universities because the black lives of students Meredith, Malone and Hood mattered. Just as the black lives in Birmingham mattered. The New York Times agreed.
But now? When black lives like that of Captain Dorn and Officer Underwood are literally gunned down by looters, instead of protected by U.S. troops? Now The New York Times caves to its woke young progressives who could care less about some black lives yet professes fear for their own.
The Times at first held firm. Then, but of course, it caved as more than 800 staffers signed a letter of protest. Said The Times in its “we’re caving” statement:

We’ve examined the piece and the process leading up to its publication. This review made clear that a rushed editorial process led to the publication of an Op-Ed that did not meet our standards. As a result, we’re planning to examine both short-term and long-term changes, to include expanding our fact-checking operation and reducing the number of Op-Eds we publish.

And irony of ironies? The reporters of The New York Times said this:

Heeding a call to ‘send in the troops’ has historically resulted in harm to black and brown people, like the ones who are vital members of The New York Times family.

Not only is that flatly false, as the Eisenhower and Kennedy examples illustrate, it summons an eerie comparison to someone else who angrily fought the sending in of troops. Here is Alabama Governor George Wallace as he stood in the school house door:

“The unwelcomed, unwanted, unwarranted and force-induced intrusion upon the campus of the University of Alabama today of the might of the Central Government offers frightful example of the oppression of the rights, privileges and sovereignty of this State by officers of the Federal Government. This intrusion results solely from force, or threat of force, undignified by any reasonable application of the principle of law, reason and justice.”