Trump Can't Mock Disability, But Obama Did, and Media Yawned

The brazenness of the double standard is increasingly stunning.

This time around? The dustup began as an offshoot of Donald Trump’s allegation that Muslims in Jersey City cheered as the towers fell on 9/11. Eventually it was confirmed that The Washington Post had in fact noted just this, here in this story from September 18, 2001. The headline in the Post:

The story was reported by Serge F. Kovaleski and Fredrick Kunkle, who, now famously, wrote among other things that:

“The FBI investigation into the terrorist attacks on the World Trade Center and Pentagon has led agents back to a familiar area: northern New Jersey.

It was there, in Jersey City, just across the Hudson River from Manhattan, that a Muslim cell plotted the 1993 bombing of the twin towers and sought to destroy other New York landmarks as part of an urban guerrilla war against the United States.

…"The area in and around Jersey City has provided individuals in the past who were bent on terrorism. So I am sure that area is of great interest to investigators right now," said James K. Kallstrom, the former head of the FBI's New York office. "They are not knocking down any straw men at this point. I think now is the time when the broad spectrum of possibilities has to be looked at.”

…In Jersey City, within hours of two jetliners' plowing into the World Trade Center, law enforcement authorities detained and questioned a number of people who were allegedly seen celebrating the attacks and holding tailgate-style parties on rooftops while they watched the devastation on the other side of the river.”

But wait! Now that Kovaleski’s story has been dug out of the Post archives, where the Post’s own “fact check” guy Glenn Kessler couldn’t seem to find it, now suddenly the Post is throwing Kovaleski -- these days a New York Times reporter -- under the bus. Says the Post of the story they printed:

“Those allegations were never corroborated but have persisted in online rumors in the 14 years since the attacks.”

Suddenly as well Kovaleski is out there with a “who, me?” defense about the story. He says he now doesn’t remember “thousands or even hundreds” of celebrants but doesn’t quite deny that he wrote there coulda/maybe/kinda possible were some. Which in turn caught Trump’s attention. At a speech in South Carolina Trump mocked the “who, me? defense and was quickly accused by an “outraged” New York Times of mocking Kovaleski’s disability (he suffers from arthrogryposis, a congenital condition that affects joint movement.)

Back there in the pre-historic days of September, 2008, NewsBusters headlined this story by John Stephenson:

Yes indeed, it seems that the 2008 Obama campaign had aired a commercial (see here) that mocked Senator John McCain for not using a computer or e-mail. Ignoring this Boston Globe story on McCain’s physical disabilities because of his time as a Vietnam POW. Reported the Globe: 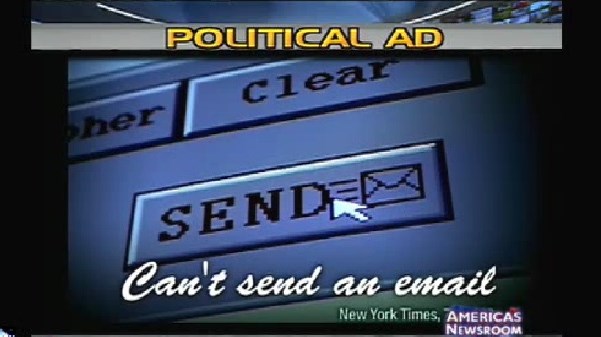 “McCain's severe war injuries prevent him from combing his hair, typing on a keyboard, or tying his shoes.”

Forbes magazine made McCain’s problem using a computer and doing e-mail even plainer:

“The injuries he incurred as a Vietnam POW make it painful for McCain to type.”

Yet there was the Obama campaign mocking McCain’s war-generated disability.

To his credit Obama running mate Joe Biden finally manned up and told Katie Couric on CBS that the ad was “terrible.” But as the Stephenson NewsBusters item was prescient enough to correctly anticipate, there was no “outrage” from  The New York Times and other liberal media outlets over the mocking of McCain’s disability that I can find.  To the contrary. On this 2008 edition of its Caucus Blog  liberal commenters to the Times relentlessly mocked McCain’s inability to use computers and e-mail. Comments included:

“Cue the tiny violins. He doesn’t use one (if he actually doesn’t) because he doesn’t WANT TO. That’s just called plain old fashioned lazy.”

“Perhaps Mr. McCain has the same effect on computers as he does on airplanes. He crashed 5 of the latter.”

“Though we have all heard – relentlessly – in the past couple of months about McCain’s POW experiences, he has never asserted that his disabilities account for his utter lack of even basic computer literacy. Furthermore, I have not heard anyone from his campaign make such a claim until this week, when the Obama ad mocking his ignorance hit the air.” (NOTE: Obviously this reader had never seen the 2000 Globe story.)

“The fact that McCain can’t use a computer has nothing to do with McCain’s war injuries, as others of your persuasion have posited but rather that fact does reveal a great lack of curiosity about technologies that have changed the world in ways that he should know about.”

The real point here is obvious. When it suits, the Left is relentlessly willing to attack any conservative or Republican. To make fun of their disability if they have one. Or to attack their race or gender. There is no blinking. No outrage. All of it done to preserve the supposed hold of liberalism over perceived races, genders or other “classes” of Americans in the eternal Leftist quest for power and control. Which in this latest dust-up means trying to stir outrage over Americans with disabilities.

And if you think McCain was alone in being targeted this way, don’t forget the GOP’s 1996 nominee, Senator Bob Dole. Dole was, famously, badly injured in World War II, losing the complete use of his right arm. But right on cue, as Dole faced off against Bill Clinton, the leftist magazine The Nation led with a cover story  depicting Dole, his disabled right arm behind his back, wearing a uniform mockingly covered with medals. The story was titled: Dole’s War Record: The first casualty of politics is truth. And what did this Leftist house organ have to say oh so respectfully of the disabled Bob Dole? Yes indeed, The Nation not only mocked Dole’s disability but claimed it to be “self-inflicted”, adding that his self-inflicted  “war record is considerably less than awe-inspiring.”

Which brings us back to Donald Trump and the “outrage” from the Times over the supposed “mocking” of reporter Kovaleski’s disability. The outrage is phony. A fraud. After the Obama ad mocking McCain’s disabilities was aired, the paper expressed not outrage but admiration. Said the Times in the endorsement they gave Obama, the man who mocked John McCain’s disability:

“This country needs sensible leadership, compassionate leadership, honest leadership and strong leadership. Barack Obama has shown that he has all of those qualities.” 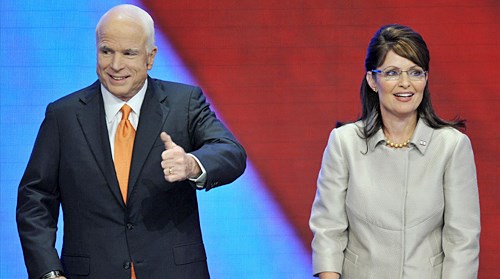 Got that? He who mocked McCain’s disability was showing “compassionate leadership”. In other words? This entire “outrage” at the Times and elsewhere in liberal quarters over Trump’s remarks about Kovaleski is typical of the massive liberal double-standard when it comes to threats to their power. They are so concerned about sexual harassment they demand Clarence Thomas be denied a seat on the Supreme Court. But an allegation of rape against Bill Clinton along with numerous charges from women of sexual harassment are no big deal. Wall Street is full of crooks financing the GOP but Hillary’s Wall Street cash is no bother. There must be a woman president or vice president but they trash Sarah Palin. Latinos are the future but Ted Cruz and Marco Rubio are not.

And on and on and on it goes. A game of political correctness and identity politics served up with a large dose of hypocrisy.

The good news? The American people are on to the game. And they intend to stop it.