Mainstream media bias isn't just against President Trump, but also Israel. On Friday, CNN, NBC, ABC, and CBS published headlines equating three terrorists behind clashes in the West Bank during the day with three Israelis who were stabbed to death the following night in the area:

Additionally, the Associated Press published an article with the headline "6 killed as tensions over shrine turn violent in Israel." This AP dispatch appeared everywhere from TIME to Fox News.

Clashes in the West Bank ensued due to Israel inserting metal detectors at the al-Aqsa mosque in Jerusalem earlier this week in response to three Arab citizens who attacked and killed two Israeli police officers at the site the previous week. Three Palestinians were killed in the clashes with Israeli security, with other Palestinians wounded, one of whom tried to build a makeshift bomb in his home, according to the Israeli army. Apparently, the clashes were over the new security measures, not who will control a place of worship as if there are still Medieval crusades being launched against Muslims. Therefore, the headlines from NBC, CBS, and ABC are, at best, misleading.

While it would be remiss to not mention that the attackers were killed, like any headline that states ISIS or any terrorist fighters were killed by US forces, what is disturbing is putting the deaths of attackers with their victims in the same line. Terrorist deaths should never be counted among innocent civilian deaths. Here, Palestinians chose to riot and kill Israelis and therefore should not be headlined alongside the three Israelis who were stabbed while eating a Sabbath dinner. 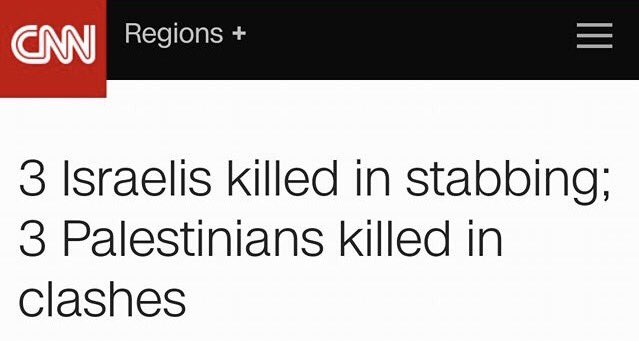 Moreover, the stories veneer the Palestinians' actions. "Palestinian activists told NBC News that a 17-year-old named Mohamad Mahmud Sharaf was killed by an Israeli settler in Ras al-Amud, a neighborhood in city's east," the CNN story read. "The Palestinian health ministry later reported a third man had been killed."

While the MSM is at it, they might as well call ISIS terrorists "activists." ABC falsely reported, "Since 1967, Israel has increasingly cut off east Jerusalem from its West Bank hinterland, leaving the city's Arab residents without a political leadership." Unlike other Middle East countries, Arab-Israelis have the same rights as their fellow Israelis. There's even two Arab-Israelis on the nation's supreme court.

Finally, the media using the word "settlement" is inaccurate. For example, the CNN story stated: "Three Israelis were killed Friday in a stabbing attack in a West Bank settlement, Israeli authorities said." United Nations Resolution 242 states that these territories are "land [which Israel seized from Jordan in the 1967 War] for peace [between Israel and the Palestinians]." Therefore, it's Israeli land which will be given to the Palestinians once there's peace. Israelis were not like the Pilgrims or took land that is not theirs--in war, like the one in 1967, land can be captured.

These headlines examplify the MSM's Orwellian, anti-Israel slant. From omitting key words such as "terrorist" to disingenuous headlines that whitewash terrorism such as "Four Palestinian Teens are Killed In Israeli Violence," they make Palestinians look like victims when they're actually the attackers. And don't forget the MSM's sympathy toward Hamas rocket attacks launched from Gaza into Israel.