"This is what democracy looks like!," liberals are so fond of proclaiming, especially while stomping their feet amid a braying mob of like-minded malcontents. They are decidedly less enamored of democracy when the votes don't go their way.

Such has been the case for the last several years in reaction to Republicans retaking the presidency, regaining control of Congress, and booting Democrats from state legislatures and governor's seats at a furious clip, to the point where Democrats have withered into a party of coastal enclaves and isolated urban outposts while the rest of the country is becoming more conservative.

With the next round of redistricting only a few years away, MSNBC's Rachel Maddow is trying to create a characteristically bogus narrative about what happened during the last redistricting.

Here's what she had to say on her show Nov. 21 after describing a ballot initiative underway in Michigan to reform the process and make it less "partisan" --

MADDOW: And, again, I don't know what you've been doing since the election but in Virginia a whole bunch of people turned their own lives upside down to do everything they could to try to bring about a Democratic landslide in that state in this off-year election in 2017. And in Virginia that worked as far as it goes, but the districts are so partisan there, even that Democratic landslide two weeks ago might not be enough to give Democrats control. It all goes back to the Republicans using the occasion of the 2010 census to change all the districts (emphasis added) so much in their favor.

Uh, did Maddow just say that Republicans used data gleaned from the 2010 census "to change all the districts so much in their favor"? That she did, but surely she is alluding to Virginia, the specific state Maddow had just cited, and one which in fact had a Republican governor and GOP-dominated legislature during the last redistricting in 2011 --

MADDOW: They did it through something called the REDMAP Project which was an act of political genius on their part -- and they had almost no competition when they did it. Well now the 2020 census is just around the corner and this time the Democrats are very aware that it's coming! That's why the political effort that President Obama and Eric Holder are working on together after the Obama administration, what they're working on is districts, how the districts will be drawn after the 2020 census. They want Democrats to make up what they lost when Republicans ran the table and changed all the districts (emphasis added) in their favor in 2010.

There -- she did it again. After specifically referring to a Republican redistricting initiative following the 2010 census and mid-terms, the REDMAP Project, Maddow once again claimed that Republicans "changed all the districts in their favor." Gee, could it be that the foremost brainiac in all of cable news is under the mistaken belief that redistricting is done at the federal level, and Republicans controlled the process last time around because they "ran the table" in the 2010 midterms?

MADDOW: That's the same effort that's going on with that massive effort in Michigan right now, not to make the districts more Democratic but to make them non-partisan, to make them competitive. That's what's going on with all the focus in Democratic politics on winning state-level elections. You keep hearing Democrats and Democratic Party partisans who are fighting about this stuff, talking about the need to win at state level, to win state legislature seats, (emphasis added and again) that's what that's about. It's a renewed focus for Democratic activists in every single state in the country, that's what's driving it, the fact that every state in the country is about to redraw their districts again based on the results of the 2020 census which is right around the corner. 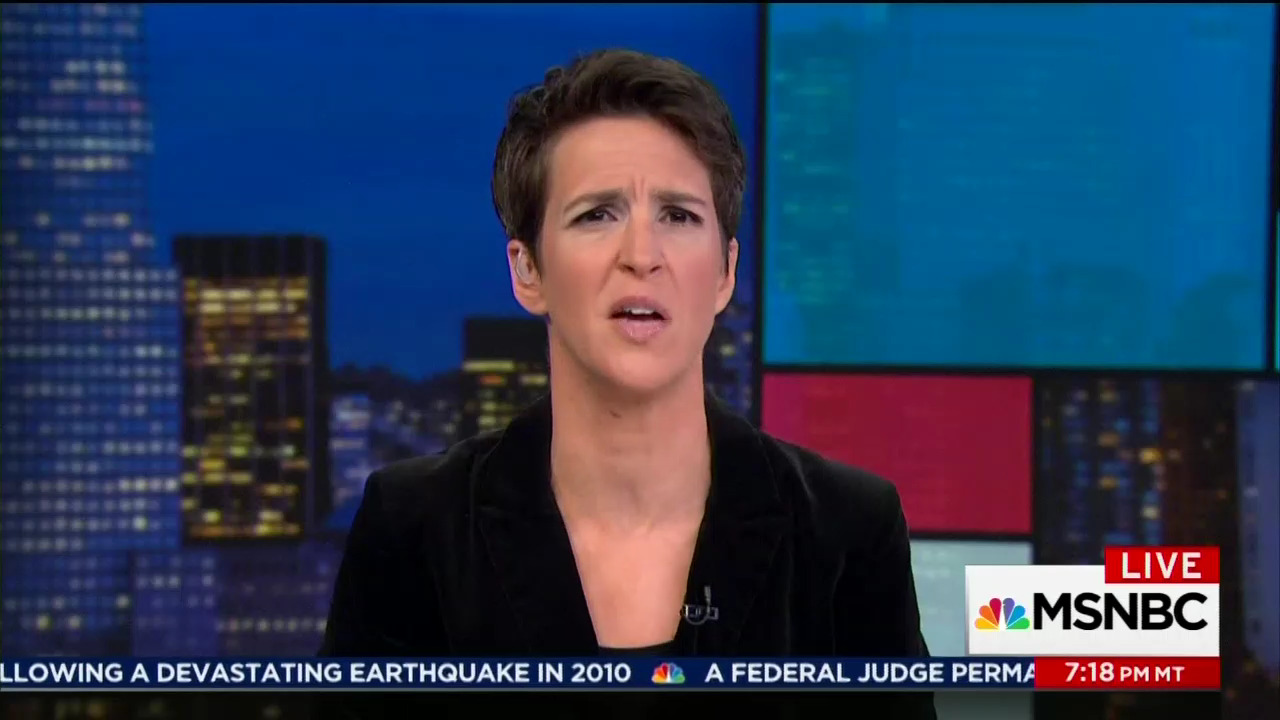 Well, that settles it -- "every state in the country is about to redraw their districts again," Maddow points out, just like they did after the last census -- followed by Republicans allegedly redrawing the lines in "all the districts" to their advantage. Notice how Maddow  doubled down on the phrase "all the districts" for emphasis. But if that were true, Republicans had to have controlled every state legislature in the country as of 2011, which they obviously didn't.

A state that comes to mind is Massachusetts -- where Maddow is a resident, not incidentally, and has been since well before 2010. Democrats have dominated the legislature by huge majorities for decades -- and the governor who signed the last redistricting into law in 2011 was also a Democrat.

When Republicans in the Bay State legislature offered their own suggestions for redistricting, they were -- go figure -- rejected by Democrats in the state that gave birth to gerrymandering. Here's how it was reported by the Associated Press at the time --

The map, which won final approval in the House and Senate, is now awaiting Democratic Gov. Deval Patrick's signature.

Lawmakers rejected a series of amendments, including an alternate map offered by Republicans (emphasis added) that called for shifting some communities between redrawn districts in the central and western parts of the state.

What is especially galling about Maddow's repeated false claim is that it comes right after her unctuous praise for the "political genius" of Republicans while Democrats were asleep at the switch after the last census. Maddow made sure to create an impression of fairness -- just before reverting to her pseudo-earnest brand of misdirection. This from a woman who once laughably boasted of "a devotion to facts that borders on obsessive."