On this, all can agree -- when Rachel Maddow stumbles, it's not for lack of intelligence. Through relentless branding, MSNBC has convinced its viewers and many others who should know better that Maddow is the smartest person on television, or at least on MSNBC at any given moment.

Which leads to an awkward conclusion -- when Maddow commits not one but two egregious errors of omission in the same report, it is not through stupidity. That is simply not possible. Such are the pitfalls of embodying her specific brand.

And such was the case on her show last night when Maddow performed the onerous duty of reporting that Virginia Gov. Terry McAuliffe is under FBI investigation for  --- wait for it -- allegedly illegal campaign contributions. This was "very surprising news," Maddow actually claimed, while somehow managing to keep a straight face.

As is her wont, Maddow backed into the story after first reporting that a new movie, Public Affairs, will be filmed in Virginia, a "political thriller about sex and danger and blackmail and politics and thrilling things" --

MADDOW: And that exciting and scandalous story out of Virginia was never going to make the show tonight ...

Until it proved quite useful for helping delay reporting on a story with the genuine potential for scandal, at which point it made the cut. (And filming a movie in Virginia is somehow "scandalous" ...?)

MADDOW: ... until later on today, after the news meeting, we got the very surprising news that Gov. McAuliffe is the focus of some real-life political drama himself. NBC News has now confirmed that the FBI is looking into whether or not Virginia Gov. Terry McAuliffe accepted illegal contributions during his 2013 campaign for governor. Specifically the FBI looking for the past several months into whether his gubernatorial campaign accepted contributions that were illegal. The FBI's reportedly particularly interested in contributions from a Chinese businessman who once held political office in China ...

MADDOW: ... but who now has permanent resident status in the United States. A lawyer for the McAuliffe campaign tells NBC tonight, "Neither the governor nor his former campaign has knowledge of this matter." The lawyer continued -- "The governor will certainly cooperate with the government if he is contacted about it." If. If! The lawyer implying that the governor himself hasn't even been told about this FBI investigation yet! But it's in the press, now, thanks to somebody leaking that information.

Maddow citing party affiliation for embattled pols -- selective, indeed. For while McDonnell is dutifully labeled Republican, McAuliffe is abruptly a man without a party, at least to those otherwise observant sorts at MSNBC. Moreover, Maddow fails to cite the single most salient fact about McAuliffe, the one that undoubtedly comes to mind for most people upon hearing his name -- that he's a decades-long confidante of Bill and Hillary Clinton. Cozy enough that he was co-chair of her '08 campaign, which does imply more than passing familiarity with the former first family. 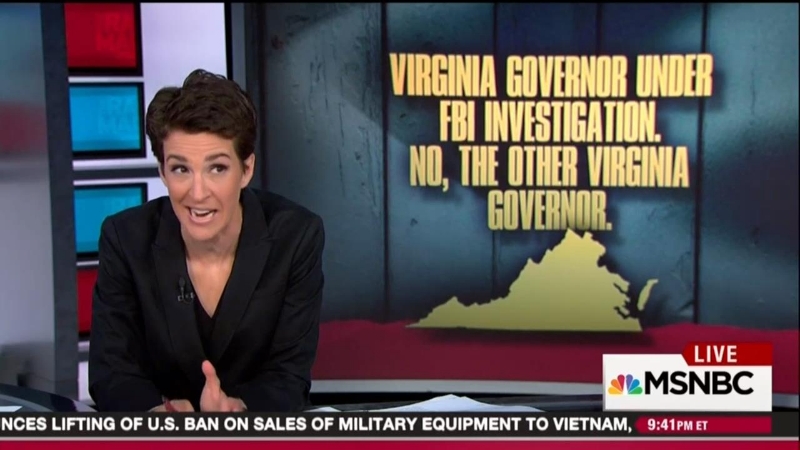 Curious about what Bill and Hill are thinking on any topic under the sun? Just ask Terry. He's practically a member of the family, more Clinton than the Clintons, much as Ethel Kennedy always seemed more Kennedy than the clan she married into. The allegations against McAuliffe even sound Clintonesque, as if lifted intact from the late-breaking scandal in Bill Clinton's 1996 campaign that may have kept him from winning a majority of the vote that year.

Not only does Maddow neglect to mention that McAuliffe is a Democrat while simultaneously pointing out that McDonnell is a Republican, her guest, Washington Post reporter Matt Zapotosky, dutifully sticks to the script. But it was all of six paragraphs into his story about the investigation that Zapotosky wrote that McAuliffe is a "longtime ally of Bill and Hillary Clinton and a prolific fundraiser" who also worked as an "unpaid director" for the Clinton Foundation until he was elected governor in 2013. One of two anonymous officials "familiar with the inquiry" said the FBI probe "includes McAuliffe's time" at the foundation.

Is it remotely possible to believe that a Republican governor with comparable proximity to Donald Trump, or to Mitt Romney in 2012, or John McCain eight years ago, and under investigation by the FBI, would have his or her party affiliation inexplicably ignored by Maddow in the heat of a tough campaign?  "We will let you know more when we learn more," Maddow assured her viewers about the McAuliffe allegations. Except for all that relevant, newsworthy stuff she chooses to unlearn.