First week of the new year and typically perceptive analysis from Rush Limbaugh about a new survey on anger that's all the rage in media.

The polling, commissioned by Esquire magazine and NBC News and conducted by SurveyMonkey, resulted in a slew of headlines about whites and Republicans as the most ticked-off of Americans.

When these are the people found to be angry, media elites quickly dismiss this as the "irrational" response of knuckle-dragging Neanderthals, Limbaugh pointed out on his radio show today. But when minorities act out anger through rioting and looting or radical Muslims express rage with terrorism, these same media elites become hand-wringing apologists, he said --

Poll -- whites and Republicans rank as angriest Americans. Nearly half of Americans are angry and no groups are angrier than whites and Republicans, according to a new NBC News/SurveyMonkey/Esquire online poll about outrage in the country. The overall 49 percent of Americans said that they find themselves feeling angrier now about current events than they were one year ago. Whites are the angriest, 54 percent saying they have grown more outraged over the past year. That's more than Latinos, 43 percent of them are angry. More than African-Americans, 33 percent of them are angry. Seventy-three percent of whites say they get angry at least once a day -- do you believe this? -- compared to 66 percent of Hispanics and 56 percent of blacks. 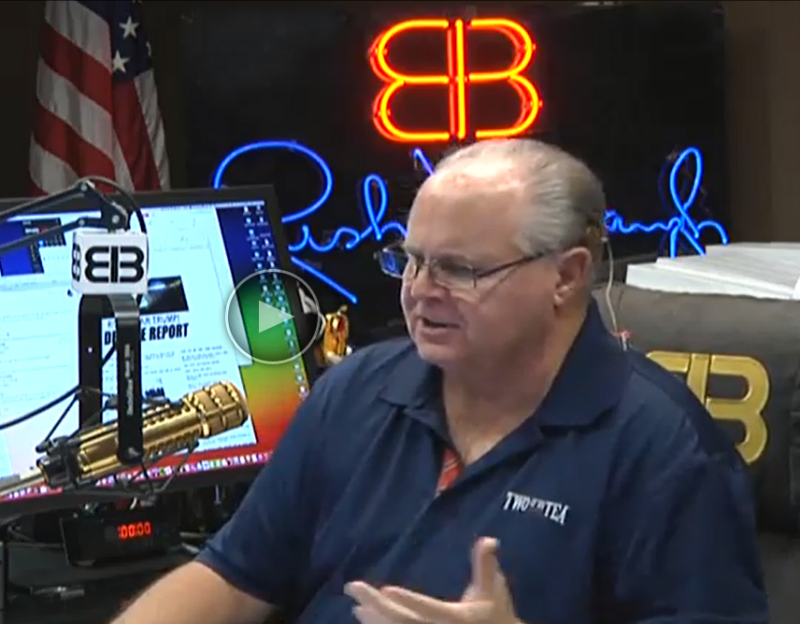 So, 73 percent of whites say they get angry at least once a day, obviously when they listen to talk radio. (Limbaugh alluding to Washington Post blogger Jennifer Rubin claiming on Meet the Press that talk radio is to blame for much of Americans' anger). And 66 percent of Hispanics and 56 percent of blacks, they only get mad once a day -- far, far fewer of them. I guess that explains all the rioting and looting that white people are doing ... uh, wait, that isn't happening. How do you explain that? (Limbaugh repeats the percentages). Obviously that would explain all the rioting and looting. And then it hit me -- the group here that's said to be angriest isn't doing any of that. But they are listening to talk radio.

The poll also found Republicans are angrier than Democrats -- 61 percent of Republicans say current events irk them more today than a year ago. Let me tell you something -- anecdotally, I don't know anybody angrier than any Democrat you run into. Any leftist, any Democrat, I don't care where you find 'em --Twitter, Facebook, the movies, on the street, Wal-Mart, I don't care, they're mad. They are livid, constantly. Not just once or twice a day, they get up mad, they go to bed madder.

But beside all of that, note here that the attempt in the media is to cast anger as irrational, irresponsible, uncalled for, very very bad and very very wrong to be mean and angry, as though there's no justification. You know, if you ask me, everybody ought to be angry over what the left has done and is doing to the country! It makes perfect rational sense for people to be angry.

So they want to cast this anger as irrational and irresponsible. To me, it's entirely common sense. What decent American who can't find a job and hasn't been able to for I don't know how long isn't mad?! People that have student loans, people that have Obamacare mandates and responsibilities and this is scratching the surface. People looking at the very identity and structure of their country being changed daily, the Southern border being overrun. What, are we just supposed to sit back and twiddle our thumbs over this?

The anger is justified but of course they try to discredit the anger and discard it on the basis of, well, it's all because of talk radio. See, once again you are too stupid to even be mad until somebody tells you to be. You don't have the mental acuity or ability to even get angry on your own. You have to wait for your local talk show host to tell you to get mad and then you do and then they go on TV and blame talk radio for it.

After a break, Limbaugh revisited his premise and again nailed the double standard in how political elites view anger --

This is another, I don't know, contradictory or conflicting or otherwise interesting factoid, that the more he goes out, Obama, the more he goes out and starts talking about controlling guns and taking them out of the hands of people or whatever he talks about, gun sales skyrocket to record levels. Now he has to know this. So what really is the purpose? This is all political, folks. Do not for a moment doubt me. Do not for a moment fall for the fact that this is about safety and about preserving life and about stopping violence or any--, it's not about that. ...

Liberalism is responsible for so much violence, they promote it. In fact, you look at this anger business, notice when white people are mad, oh that's bad and we're supposed to condemn it and blame talk radio. But when anyone else is mad -- Muslims, African-Americans, Hispanics -- we're supposed to stop and understand the rage. We're supposed to stop and learn from it. We're supposed to figure out why they're mad and we are then told that the reasons they're mad, why, they make sense, they're justifiable. White people anger constantly is unjust, it's illegitimate and must be condemned. There's no reason whatsoever white people should ever be mad and if you are there's something wrong with you and we're going to get to the bottom of it and probably find out you listen to talk radio.

But when they're looting and rioting in Baltimore, St. Louis, well, stand back. When they're blowing up the World Trade Center, we're supposed to stand back and understand the rage and ask ourselves, what are we doing that makes them so mad?

Along the same lines, it's not just Donald Trump's instinctive loathing for political correctness that helps explain his broad appeal -- he's one of the few politicians viscerally angered by America's decline and Trump is unwilling to acquiesce. "Let fury have the hour, anger can be power, d'you know that you can use it?" vented The Clash on London Calling in late '79, on the cusp of another pivotal election year. Now as then, if you're not angry, you're not paying attention.