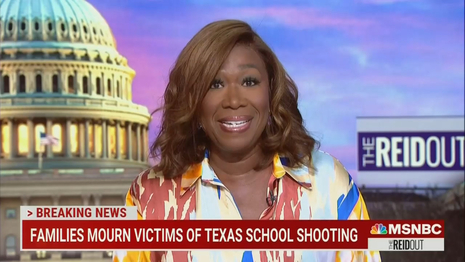 If you are a conservative Republican-voting, gun-owner, liberal journalists and Hollywood-types believe you are ultimately responsible for every tragic shooting.

Last week, they blamed the Buffalo shooting on “white grievance” “rhetoric” from “white supremacist” Republican voters and the “racist” conservative hosts they watch.

This week they blamed the Uvalde, Texas school shooting on the GOP’s “tolerance for blood” and gun owners’ belief in a “religious tenet” found in a “flawed document.”

The following are some of the most twisted takes by liberal elites in the media and Hollywood in the wake of the Uvalde school shooting:

“Please stop thinking that there is some body count, some level of brutality and carnage that will move them — these Republicans and their two pet Democrats. That the rivers of blood will one day run deep enough and the slaughters tragic enough that these politicians will say, ‘Okay, that’s enough. Let’s do something.’ Because their tolerance for blood and the NRA’s tolerance for slaughter are bottomless, as is the grief and the torture that the parents of slaughtered children and slaughtered grandmas and shoppers and bible study parishioners, all the slaughtered Americans will feel every day for the rest of their lives. So honestly, to hell with anybody who says ‘don’t politicize this,’ because these deaths, until we change, until we stop letting this minority of ghouls rule us, this is who we are.”
— Host Joy Reid on MSNBC’s The ReidOut, May 25.

“The Republican Party never changes. For decades they’ve consistently blocked gun reform. Opting instead to sit aside and watch the body count rise.”
— Host Joy Reid on MSNBC’s The ReidOut, May 26.

Todd Mocks Prayer, Denies “Absolute Right” to Self Defense “Does Not Exist”

“It’s become our uniquely American ritual of words after each episode of this uniquely American serial tragedy. ‘Thoughts and prayers, nothing we can do. No law would have stopped this. The real problem is mental illness. If only the victims had been armed.’...No member of Congress has been voted out of office for being too pro-gun. Not one! So until the majorities who claim they want tougher background checks and to get assault weapons off the street, vote like they mean it, we can expect to hear more calls for thoughts and prayers and that’s it. Because this current version of the Republican Party is being held hostage by a vocal minority obsessed with an absolute right that does not exist.”
— Moderator Chuck Todd on NBC’s Meet the Press, May 29.

“One side is the table with the most reasonable policy proposals that are, frankly, quite modest, maybe too modest, but they have the support of 85 percent of the public behind them. The other is swathed in frothy delusion that someone is coming to take their guns.”
— Host Nicolle Wallace on MSNBC’s Deadline: White House, May 27.

…Where Would They Get That Idea?

“I think everybody just thinks assault rifles have to go.”
— Co-host Gayle King on CBS Mornings, May 27.

“It’s always something else. It’s mental health….I haven’t seen [Texas Republican] Governor [Greg] Abbott funding mental health in Texas….It’s just an excuse today to make people forget about the slaughter. Another slaughter. Yet another slaughter in Abbott’s state. And Mika, you talk about a sick son of a bitch. The guy called [Former Texas Democratic Congressman] Beto [O’Rourke] a sick son of a bitch? The sick son of a bitches were the ones up on that stage that keep — the freaks! The freaks on that stage.”
— Host Joe Scarborough on MSNBC’s Morning Joe, May 26.

“Texas Governor Greg Abbott told reporters today that children are a blessing, a gift, he said, that was taken away from parents here in Uvalde too soon. And while that’s certainly true, children are a blessing, guns are a right in this country because of 27 words the Founding Fathers tucked into the Bill of Rights in 1791. Now the question becomes, have the times and the weapons changed beyond the original scope? A discussion we may finally be ready to have in America. Children are a blessing. Guns are a right. Our collective inability to stop the menace of mass shootings though — in this country — counts for nothing less than a curse.”
— CBS Mornings co-host Tony Dokoupil on CBS Evening News, May 25.

Host Katy Tur: “It is not a good day to be with you. It cannot be a good day when we live in a country that shrugs its shoulders children as are being murdered. Nineteen kids shot to death with an assault rifle, an AR-15-style weapon according to law enforcement, a weapon designed for war….They [Republican politicians] said ‘This is not the time for politics. Now is the time to be with families and that this isn’t partisan, it’s not a political thing.’ But Chuck, it is partisan, it absolutely is partisan because there’s one party that’s refusing to pass gun laws.”...
NBC’s Meet the Press moderator Chuck Todd: “You have one party that has decided that the Second Amendment is almost a religious tenet and there is such a fervor on it that you cannot have sort of a logical and rational conversation.”
— MSNBC’s Katy Tur Reports, May 25.

The View Is Coming for Your Guns

Co-host Whoopi Goldberg: “I swear to God if I hear another Republican senator talk about their heart being broken, I’m going to punch somebody!”
Co-host Joy Behar: “And thoughts and prayers.”
Goldberg: “I can’t take anymore thoughts and prayers. If your thoughts and prayers were really with everybody, you would have done something by now.”…
Co-host Ana Navarro: “I would like Republicans to show the same energy that they do for banning books and banning conversations about gays and banning conversations about black history, and regulating my uterus. I want them to show the same energy for banning guns.”
— ABC’s The View, May 25.

“Listen, this AR-15’s got to go….I don’t care NRA, you’ve got to give that gun up. You can have your other yee-haw guns, whatever you want. The AR-15 is not a hunting gun….This gun is meant to kill people. That’s what it’s for. You can’t have it anymore….You can’t have this gun because it kills people and children….I want people who are part of the NRA to have to go to the funerals of these children….We’re not doing it anymore. I’m telling y’all. We have to vote it, we just have to put it to the vote and remove the AR-15….I want that AR-15. I want it. And we’re going to vote it out so it’s not going to be accessible.”
— Co-host Whoopi Goldberg on ABC’s The View, May 31.

GOP = “The Party of Massacres”

“We need to admit that we love our guns more than we love our children. And if you are watching and listening and saying, ‘Oh, I don’t have guns, of course, I love children more,’ well, the proof’s in the pudding. The actions are including people who do nothing and say nothing about this. It’s clear that we’re more concerned about bipartisanship, preserving the filibuster so that we can't get anything passed. And I think that we’ve let this happen.”
— Actor Michael Moore on MSNBC’s All In, March 24.

“We have a flawed document. It is not the — it is not a sacred relic of infallible people. It’s a legal document. It gave us slavery, it gave us women not voting. It gave an ambiguous phrase about a well-regulated militia….That document leaves a vast room for sickness and failure and pain….This morning I am feeling like we’re done….The cult of death that the Republican Party has become in America is astonishing to me.”
— HBO’s The Wire showrunner David Simon on Washington Post Live podcast, May 26.

“While our leaders on the right, the Americans at Congress and at Fox News and these other outlets warn us not to politicize this, they immediately criticize our President for even speaking about doing something to stop it. Because they don’t want to speak about it. Because they know what they’ve done. And they know what they haven’t done. And they know it’s indefensible. So they’d rather sweep this under the rug….A bipartisan bill passed in the House, it’s been stalled in the Senate for over a year now. They won’t pass it. Because our cowardly leaders just aren’t listening to us. They’re listening to the NRA. They’re listening to those people who write them checks, who keep them in power.”
— Host Jimmy Kimmel on ABC’s Jimmy Kimmel Live!, May 25.

“The blood of every child that dies of gun violence in this country is on the hands of the Republican Party.”
— May 24 tweet by film director Rob Reiner.

“WHAT IN GOD'S NAME ARE WE DOING?  THIS HAS GOT TO CHANGE!  THIS NATION IS FULL OF PEOPLE WHO CANNOT CONTROL THEIR WORST IMPULSES AND THE INNOCENT ALWAYS PAY THE PRICE!  DON'T SAVE FETUSES ONLY TO HAVE THEM DIE AT SCHOOL BECAUSE YOU LOVE YOUR GUNS MORE THAN LIFE!  FOR SHAME!!”
— May 24 tweet by singer/actress Bette Midler.

“Fuck the GOP and their obsession with guns. Fuck you, @tedcruz. Fuck you, @Sen_JoeManchin and @SenatorSinema. HOW MANY CHILDREN HAVE TO DIE?”
— May 24 tweet by actress Alyssa Milano.