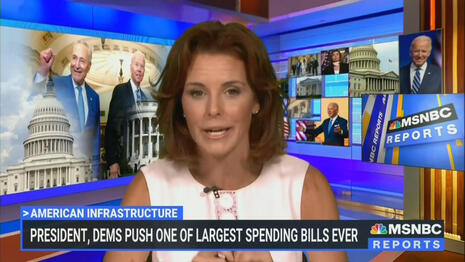 On Thursday it was officially announced that MSNBC Live host Stephanie Ruhle will take over the timeslot previously occupied by “Lying” Brian Williams. While Ruhle doesn’t share the reputation of telling tall tales that her predecessor has, she does share one trait with him — a tireless zeal to attack conservatives and promote a leftist agenda.

Ruhle was hired by MSNBC in 2016 and right from the start she started trashing Donald Trump and his supporters while dutifully defending Democrats and their ultra-progressive policies. Most recently the NBC News Senior Business Analyst has been doing her best to spin for President Joe Biden. The incoming 11pm host has downplayed rising inflation, telling her viewers to put it into “perspective.” Ruhle also gushed over Biden’s so-called “Build Back Better” spending bill: “It is the Barbie DreamHouse of improvements to the human condition.”

The following is just a sampling of some of the Worst of Stephanie Ruhle’s work at MSNBC via the MRC’s archives:

Time to Put Inflation in “Perspective”

“The dirty little secret here….while nobody likes to pay more, on average we have the money to do so. Household savings hit a record high over the pandemic. We didn’t have anywhere to go out and spend….So, we need to put all of this in perspective.”
— MSNBC host Stephanie Ruhle on NBC’s Sunday Today, November 14, 2021.

Eager to Live in “Barbie Dream House” of Socialism

“This is the kind of spending bill that could break records. It has the child tax credit, it has free pre-K, it has expanded Medicare benefits, clean energy. It is the Barbie DreamHouse of improvements to the human condition. We all want to live in that Barbie DreamHouse, but how are we going to pay for it?”
— Host Stephanie Ruhle on MSNBC Live, July 15, 2021.

Is It “Unfair” to Be Tough on Biden?

“Are we holding President Biden to an unfair standard? Saying, ‘I thought you were going to go unity,’ when we are not saying that to any Republican who was asking for unity after Democrats called for an impeachment hearing and certainly didn’t ask the President [Trump] to even represent any form of unity in governing the whole country?”
— Host Stephanie Ruhle on MSNBC Live, February 3, 2021.

Out of Touch and Exasperated

“Why on Earth does this President [Donald Trump] poll well when it comes to the economy and crime? We are in a crisis!”
— Host Stephanie Ruhle to Atlanta Mayor Keisha Lance Bottoms on MSNBC Live with Stephanie Ruhle, August 17, 2020.

Correspondent Vaughn Hillyard: “You had very peaceful week here on these streets....I think it’s important to note, Stephanie, this is not some hostile takeover....It’s a lot of folks doing their part to put out a set of demands they want to see....Not just on criminal justice issues but also education, health care, economic issues here....What you saw here over the weekend were thousands coming in to spread that message. Stephanie?”
Host Stephanie Ruhle: “That message of peace and community. Vaughn, thank you so much. It’s so important to have you there showing us the real story.”
— MSNBC Live with Stephanie Ruhle, June 15, 2020. After five shootings and two deaths in the span of three weeks the CHOP zone was finally taken down by Seattle authorities on July 1, 2020.

“We know we live in a free-market capitalist society. And in this society, individuals, more today than ever, have been able to amass billions of dollars in personal wealth. Do we need to revisit capitalism, seeing that the disparity between the rich and the poor has become so exaggerated?”
— Host Stephanie Ruhle’s question to Melinda Gates on MSNBC Live with Stephanie Ruhle, April 24, 2019.

“I am intrigued, I’m excited, I’m scared, I’m a little grossed out. And you know what? I owe Michael Avenatti an apology. For the last few weeks, I’ve been saying, ‘Enough, already, Michael, I’ve seen you everywhere. What do you have left to say?’ I was wrong, brother. You have a lot to say. The Democrats could learn something from you. You are messing with Trump a lot more than they are.”
— Host Stephanie Ruhle on MSNBC Live, May 9, 2018.

“[American Conservative Union chair] Matt Schlapp, last night, I noticed on Twitter saying Republicans don’t do this to Democrats. They absolutely do. Think back to Merrick Garland. He clearly wasn’t given a fair shot. Are Democrats playing dirty? And if they are, is it justified, since Mitch McConnell set the dirty table and won?”
— Host Stephanie Ruhle on MSNBC Live, September 24, 2018.

Host Stephanie Ruhle: “You’re talking about a nuanced powerful argument. But lots of people don’t get into the argument. They just go, ‘Oh my gosh, socialist? I can’t have that! It’s going to take all my money!”
CNBC contributor Ron Insana: “And I will tell you if the entire Democratic Party gets branded as socialists successfully going into the midterms or the 2020 presidential, they lose.”
Ruhle: “Even if those are winning policies? It’s such a difficult term.”
— MSNBC Live, August 3, 2018.

“Sleazy” and “Evil” McConnell Got His Way

“The First Lady’s plans to help children, they don’t gel with her husband’s policies. Policies that impact every child in this country. Less than about an hour after her announcement, Attorney General Jeff Sessions announced a new zero tolerance crackdown on families who enter the United States illegally. He is threatening to separate parents from their children at the border....If you’re smuggling a child, chances are we’re talking about an infant. A baby. Ripping babies from their mothers who have risked everything in search of a better life. How exactly is that being best?”
— Co-host Stephanie Ruhle mocking Melania Trump’s “Be Best” program, on MSNBC’s Live with Velshi and Ruhle, May 8, 2018.

Democracy Is “Crumbling” Under Trump

“If darkness is where democracy dies, and that’s where we are, are we not on the brink of our democracy possibly crumbling?”
— Co-host Stephanie Ruhle on MSNBC Live, February 5, 2018.

We Don’t Know If It’s True, But We’re Going to Broadcast It Anyway

“I’ve spoken to people inside the White House in the last 24 hours who have said, ‘Even if not all of it is true, the spirit of the book [Fire and Fury: Inside the Trump White House by Michael Wolff] is and it’s troublesome.’”
— Host Stephanie Ruhle on MSNBC Live, January 4, 2018.

If an Adored Democrat Is Involved, We Must Avoid “Slippery Slope”

“How slippery a slope is it? I mean, again, I’m just speaking as somebody who spent 15 years of her life working on Wall Street. But if we’re gonna start to go after everyone in every power industry for something like a butt slap, I’m worried that there’s going to be no one left running anything.”
— Host Stephanie Ruhle discussing a picture of former Democratic Senator Al Franken groping former Fox Sports Network host Leann Tweeden on a 2006 USO tour as aired on MSNBC Live, November 20.

Host Stephanie Ruhle: “Nevada has some of the most relaxed gun laws in the country. This state does not require firearms owners to have licenses. It does not require registration of weapons. It does not limit the number of firearms an individual possesses. People were asking about the 10 guns in the gunman’s room. This state does not prohibit the possession of assault weapon, 50 caliber rifles or large capacity ammunition magazines. Before we go, I want to bring commissioner Bratton back in. When you hear this, these very relaxed gun laws in the state of Nevada. How do the police protect against this?”
Commissioner Bill Bratton: “They don’t. In terms of what you just described, is, in some respects, a reflection of insanity, but that's the reality.”
Ruhle: “One more time. The description of insanity.”
Bratton: “Description of insanity in terms of what the police are up against...There is a bill to allow silencers that would muffle the sound of a gunshot to be sold openly. Right now they are very restricted.”
Ruhle: “What is the rationale?...Could even a gun lover, a gun enthusiast, what is the rationale behind need, wanting a silencer if not to muffle or hide what you’re doing?...Protect the ears of the hunters. How about the lives of the innocents?”
— MSNBC Live, October 2, 2017.

How Can You Defend Trump in Front of Your Kids?

“You’re a mother. You’re a woman. Are you more offended by the phrase ‘average Americans’ or ‘grabbing a woman’s genitals?’....You’ve got to look at your kids when you go home at night....I’m not going to let my kids watch the debate tonight. I don’t let my kids watch Donald Trump in the fear that he will say to a woman in the audience, ‘You’re fat.’ In fear, that he’ll make fun of someone with special needs. I don’t ever want my kids to say that.”
— Host Stephanie Ruhle to Donald Trump campaign manager Kellyanne Conway on MSNBC Live, October 19, 2016.