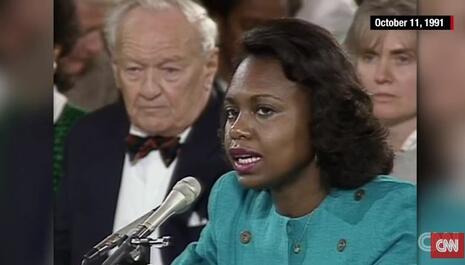 Today marks the 30th anniversary of Anita Hill’s first day of testimony against current Supreme Court Justice Clarence Thomas and we at NewsBusters decided to take a look back at the stark contrast in how they trashed Thomas but sainted Hill.

When Justice Clarence Thomas was well on his way to being confirmed in 1991, the Democrats brought forth Anita Hill to accuse Thomas of sexual harassment, in a last ditch attempt to derail his nomination.

At the time (according to a USA Today October 14, 1991 poll) the public believed Clarence Thomas by 47 percent over Anita Hill (24 percent)...so the media rallied around Hill.

While Thomas and his congressional defenders were demonized, Hill was instantly canonized as a Rosa Parks for her time by the likes of Time’s Nancy Gibbs — and she’s been celebrated as a truth-telling activist since then.

During the height of the #MeToo movement in 2018 PBS anchor Judy Woodruff, on the January 4 edition of NewsHour, pressed then-former Vice President Joe Biden to speak on his role in the Hill-Thomas hearings: “We have watched this incredible MeToo movement. In connection with that, you have said that you owe Anita Hill an apology about what happened back in 1991, the Clarence Thomas episode. Have you contacted her, number one? And, number two, do you think, this time, it’s different, that we are seeing with the MeToo movement something that is truly going to lead for change, to change for women?”

Barbara Walters rolled out the red carpet for Hill’s March 19, 2014 appearance on ABC’s The View as she gushed: “I would just like to say that I’m honored to be meeting you. I watched those hearings, as did so many other people. And to so many of us, you were our heroine.”

On the October 10, 2011 edition of ABC’s Good Morning America co-host Robin Roberts invited her on to discuss her “legacy”: “Take us back. What were your emotions?...Are you still angry?...Do you think it would have been different, had they taken place during the social media age, where people would have been tweeting about it and posting and perhaps other women would have come forward?...I know there’s still many books to be written, but [what’s] your legacy?”

Back in 1991 the press excoriated Thomas and lauded Hill.

The following is a look back, via the MRC’s archives, of how the media treated the 1991 Thomas-Hill hearings: 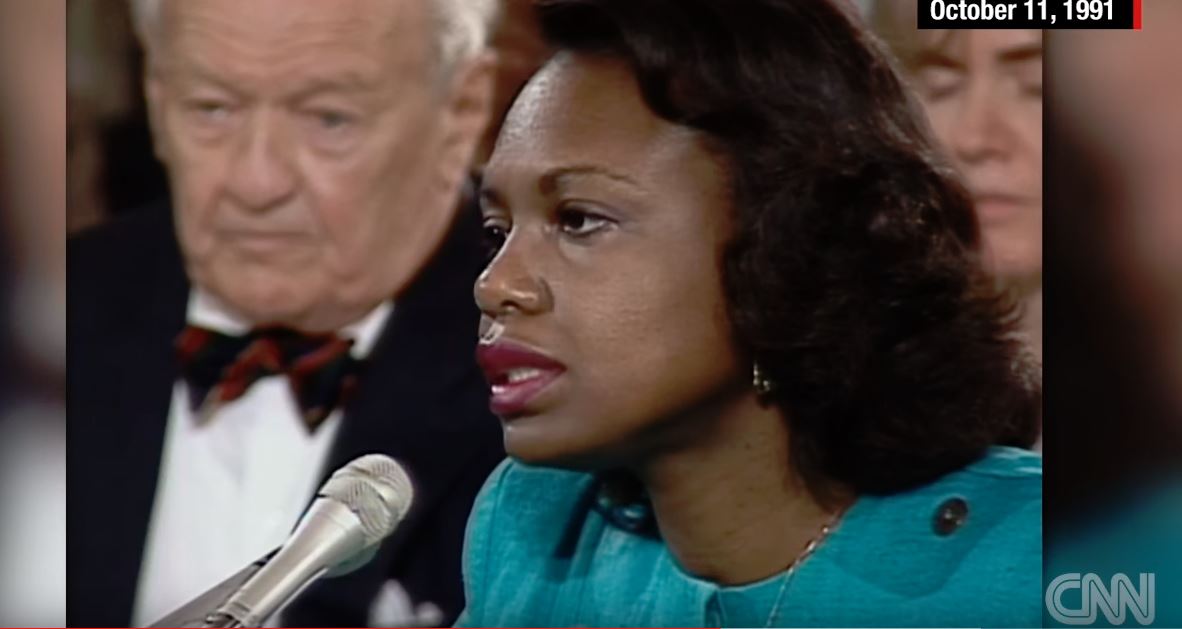 “Given the detail and consistency of her testimony, it was almost inconceivable that Hill, rather than describing her own experiences, was fabricating the portrait of a sexual-harassment victim....Thomas’ two sessions of angry rebuttal were compelling. But even so riveting an appearance could not mitigate the impact of Hill’s own eight hours of virtually uninterrupted testimony....her tale struck a resonant chord with countless women across America.”
— Time Associate Editor Jill Smolowe, October 21, 1991 issue.

“And then there was Anita Hill, the poised daughter of so many generations of black women who have been burned carrying torches into the battle for principle. The cause of civil rights and social justice has so often fallen to them to defend. Harriet Tubman and Sojourner Truth were slaves by birth, freedom fighters by temperament. Rosa Parks was a tired seamstress who shoved history forward by refusing to give up her seat on the bus....The latest to claim her place in line is Anita Hill, a private, professional woman unwilling to relinquish her dignity without a fight.”
— Time Associate Editor Nancy Gibbs, October 21, 1991 issue.

“And what about the fact that Hill maintained such dignity and stamina in such sordid and sleazy surroundings? It had to occur to some viewers as they watched the way she handled herself that she would have made a much better Supreme Court nominee than Thomas does.”
— Washington Post television critic Tom Shales, October 12, 1991.

“Well, it seems that women have lost yet again....Here we have an example of, everyone in America got to see what happens when one woman stands up to a man in an all-male tribunal. She was humiliated.”
— Wall Street Journal reporter Susan Faludi on Today, October 16, 1991.

“There was plenty of reason to vote against him without this....[Anita Hill] has done nothing to suggest she has a credibility problem, whereas Clarence Thomas has done a lot to suggest that he can lie pretty easily.”
— Newsweek’s Eleanor Clift, October 12, 1991 McLaughlin Group.

“I think that he [Thomas] had the advantage of prime time on Friday night. He had everything going for him. The Democrats did not ask him tough questions about the facts of her charge and they did, the Republicans did a great job of hammering her. It’s basically what happened in the ‘88 campaign. The Republicans know how to fight dirty.”
— NBC congressional reporter Andrea Mitchell, October 15, 1991 Today.

Arlen Specter: Source of All Evil

“The lowest point on the first day of the hearing came when Pennsylvania Republican Arlen Specter implied that Hill had simply fantasized Thomas’ asking for dates and his lurid remarks about pornography. It is all but inconceivable that a similarly qualified man, black or white, would be accused not merely of lying but of imagining things.”
— Time Senior Editor Jack E. White, October 21, 1991.

“Alan Simpson, for those of us who were too young to know what Joe McCarthy was really like, Alan Simpson showed us. `I have in my pocket two dozen card-carrying smearers against this awful woman,’ and then he produced those smears, those bombshells, and they were duds.”
— Wall Street Journal Washington Bureau Chief Al Hunt on CNN’s Capital Gang, October 19, 1991.

Alan Simpson: Source of All Evil 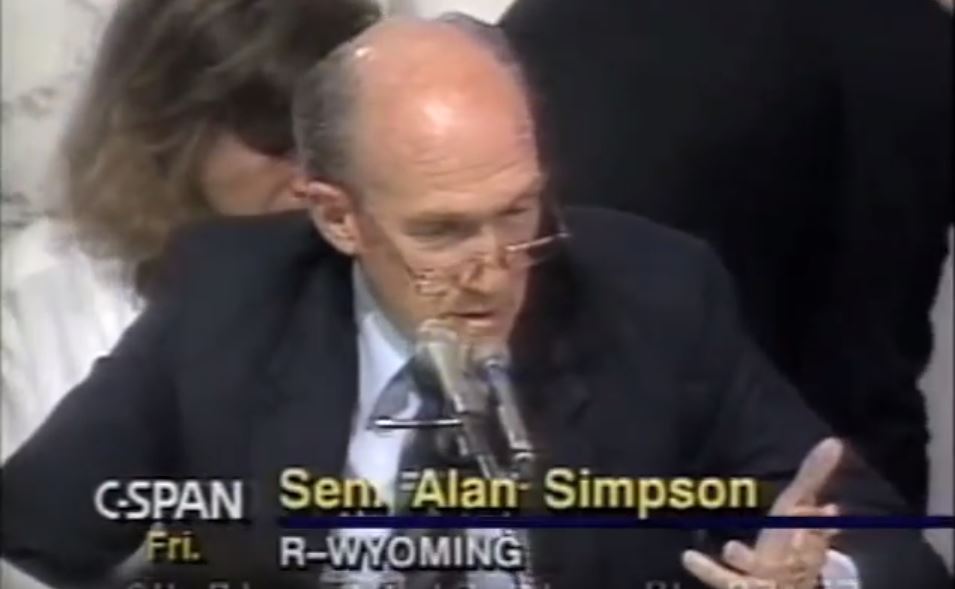 “The days of Simpson Chic are over. Now he is more often compared to Red-baiter Joe McCarthy. The image of Simpson flinging open his jacket and declaring he had lots of `stuff’ against Anita Hill - while revealing nothing - was the lowest of many low points in the Clarence Thomas hearings. Any Senator with a sense of history should have said, as attorney Joseph Welch eventually did to McCarthy, `Senator, have you no shame?’....[Simpson] is writing a book about the media - a little like Stalin discussing intergovernmental relations.”
— Newsweek Washington reporter Eleanor Clift, October 28, 1991 news story.

“Senator Alan Simpson, who usually manages to hide his meanness behind an Andy Rooney facade, warned Hill that she would be `injured and destroyed and belittled and hounded and harassed - real harassment, different from the sexual kind, just plain old Washington-variety harassment.’”
— Time Deputy Washington Bureau Chief Margaret Carlson, October 21, 1991.

“I’ve been in this town for 21 years, and they play a vicious brand of politics in Washington. Washington can be a mean town. This was as vicious a fight as I’ve ever seen except it was totally one-sided....When you had Alan Simpson standing up there like Joe McCarthy, reaching in his pockets and saying `I’m getting stuff through faxes, and all over the country,’ he sounded just like Joe McCarthy, let’s face it. And you had Arlen Specter, who was a prosecutor at one time, saying that she committed perjury, when probably you couldn’t find another prosecutor in the country that would tell you that she had committed perjury.”
— Los Angeles Times Washington Bureau Chief Jack Nelson on Washington Week in Review, October 18, 1991.

Hatch and Other Republicans: Source of All Evil

“Sen. Orrin Hatch (R-Utah), whose painstaking smear of Hill had been one of the uglier aspects of an inordinately ugly ordeal, rose yesterday to repeat gratuitously many of the innuendoes against Hill on the Senate floor.”
— Washington Post TV critic Tom Shales, October 16.

“Lee Atwater must be smiling somewhere. His fellow Republicans haven’t forgotten how to go for the jugular, as demonstrated during their `investigation’ into Anita Hill’s charge that she was sexually harassed by Clarence Thomas. The Republicans showed just how dirty and effective their throw-all-the-mud-you-can act can be.”
— Boston Globe business reporter Joan Vennochi, October 16, 1991.

“Bush should also bear the burden...[for] a Republican team effort not only to nominate Thomas but to destroy Anita Hill. While Biden bent over backward to be fair to Thomas’ witnesses and to the nominee himself, the Republican team of Senators called Hill a liar, questioned her sanity for bringing a sexual-harassment charge, and, by twisting and distorting Hill’s statements, concluded she had committed perjury. This was Willie Horton all over again.”
— Robert Healy, former Boston Globe Washington Bureau Chief, October 20, 1991.

For more on Thomas and how, 30 years ago today, he fought back against the left and the liberal media’s “high tech lynching,” go here.