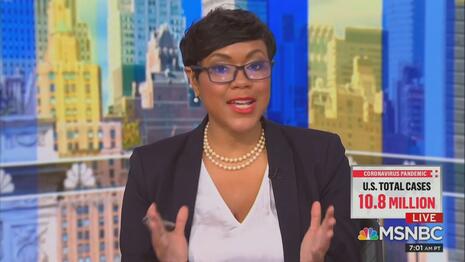 This past month saw lefty journalists welcoming Joe Biden with bouquets and softball questions, while demanding Donald Trump and his “flunkies” be dragged out of the White House and thrown in prison.

MSNBC host Tiffany Cross fantasized: “Will we see this President dragged out on the White House lawn like a 1980s episode of Cops?” Former MSNBCer and now full-time YouTuber Keith Olbermann imagined “prisons...filled with Trumps and Trump flunkies.”

New York Times columnist Thomas Friedman gushed over Biden: “We are really lucky...to have a President who’s just really hard to hate.” CNN’s Jeff Zeleny excused Biden’s bumbling past: “He has a long history, we used to call them gaffes, now, in this climate, it’s something different entirely: empathy is really what shines through.”

There were also the (at this point) perfunctory but still sickening comparisons of the President to Nazis with the likes of CNN’s Christiane Amanpour tortuously linking Trump to Kristallnacht.

The following are just some of the most outrageous quotes from network and cable hosts and reporters over the last month:

“This appears as though we are in a national security crisis. If this President is just saying, ‘I won’t go. I’m calling the election fraudulent and I will not leave the White House.’ Will we see this President dragged out on the White House lawn like a 1980s episode of Cops?”
— Host Tiffany Cross on MSNBC’s AM Joy, November 14.

“We want the prisons so filled with Trumps and Trump flunkies and Trump apologists and Trump enablers that we have to convert Trump buildings into new God-damned Trump prisons!”
— Thanksgiving message from Keith Olbermann on his YouTube show Olbermann Vs. Trump, November 24.

And Speaking of Genocide, How About That Donald Trump?

“This week, 82 years ago, Kristallnacht happened. It was the Nazis’ warning shot across the bow of our human civilization that led to genocide against a whole identity. And, in that tower of burning books, it led to an attack on fact, knowledge, history and truth. After four years of a modern-day assault on those same values by Donald Trump, the Biden/Harris team pledges a return to norms, including the truth. And, every day, Joe Biden makes presidential announcements about good governance and the health and security of the American people, while the great brooding figure of his defeated opponent rages, conducting purges of perceived enemies and preventing a transition.”
— Host Christiane Amanpour on PBS’s Amanpour & Co., November 12.

“The historical parallel that seems most appropriate today is a very dark one. After Germany surrendered at the end of World War I, ultra-right-wing groups concocted the myth that Germany was actually on the verge of winning the war in November 1918 but surrendered because of a conspiracy to destroy the country plotted by certain communists and Jews.”
— Host Fareed Zakaria on CNN’s Fareed Zakaria GPS, November 15.

New York Times editorial writer Mara Gay: “He [Rev. Martin Luther King Jr.] said, never forget that everything that was done in Nazi Germany was legal and really, I think that is true of so much of this presidency, but this [pardoning of Gen. Michael Flynn] is the most explicit example before us today.”
Host Nicolle Wallace: “Well, look, once Mara Gay gets profound and quotes MLK, I can’t go back to some stupid thing Trump tweeted, so let’s stay here.”
— MSNBC’s Deadline: White House, November 25.

“We are really lucky, I think, to have a President who’s just really hard to hate at a time when our politics is so infused with hate.”
— New York Times columnist Thomas Friedman on CNN’s Reliable Sources, December 6.

“The record of the last 12 years is one of blowtorch opposition from Republicans to Democratic presidents. There are a couple of things that are different this time. First of all, though, Joe Biden is a white man. Barack Obama's race played a role in the intensity of the grassroots and the opposition in Washington to what he was trying to do, so that makes a difference.”
— White House correspondent John Harwood on CNN Tonight, December 4.

“The country is going to see the person who many in Washington have known for a very long time. He’s steady, he’s measured, he doesn’t always stay on script. We’ll see if he does that as President. He has a long history, we used to call them gaffes, now, in this climate, it’s something different entirely: empathy is really what shines through.”
— White House correspondent Jeff Zeleny on CNN New Day, November 25.

NBC News correspondent Geoff Bennett to Joe Biden: “I wanted to start with a question about your pandemic planning and then a question about your economic plan. You spoke about the need to access the outgoing COVID vaccine distribution administration plans. What do you see is the biggest threat to your transition right now given President Trump’s unprecedented attempt to obstruct and delay a smooth transfer of power?”...
ABC News correspondent Mary Bruce: “You just spoke of some of the dangers of the President’s continued stonewalling of this transition. But it doesn’t appear that the President is going to come around any time soon and admit defeat. So what are you going to do? What options do you have to try to ensure that you are ready to go on day one?”
— Questions posed to President-elect Joe Biden at a press conference, November 16.

“History will also ask what was in the hearts of the men and women who continued to support this creature Trump, after his defeat. After his repudiation. After the national wildfire that was COVID-19 accelerated into this hellscape of conflagration in the days after the 2020 election. Who let Trump continue to run the pandemic fight into the ground? Who let Trump stay manifestly insane as he is in office? Who refused to risk anything? Refused to risk even a momentary loss of power to instead be certain that death ruled this nation? Who were these people? Did you put them on trial? Did any of them go to prison? What did you do to Trump after it was clear that he knew what was ahead and lied and lied and lied and lied and lied? What did you do to make sure that no leader could ever commit this treason again? Treason not against the country. Treason against humanity!”
— Host Keith Olbermann on his YouTube show Olbermann Vs. Trump, November 19.

Host Joy Reid: “I feel [Sen. Mitch] McConnell is just as center to the sort of, you know, diminution of black life over the last ten years as Trump.”
New York Times Opinion Contributor/Georgetown Professor Michael Eric Dyson: “There is no question about that….I talk about fast terror and slow terror. Fast terror is when bombs drop, when they lynch black people, and hurt us very explicitly by the police who hurt and harm and kill us. Slow terror is kicking kids out of school, denying opportunity to be fed both mentally and physically. Mitch McConnell, in this sense — if Donald Trump is a fast terrorist, is a racist, then Mitch McConnell is taking a slower train towards racial revulsion. He is enacting some of the worst practices we have seen in the history of this nation in regard to a senator blocking the coming to fruition of legislation that could relieve the hurt and suffering of black people.”
— During discussion about police reform bill on MSNBC’s The ReidOut, December 3.

Wait? She Was Being “Polite” Before?

“I’m done with being polite! I actually would like people in this country to stay alive. Unlike some of your [to co-host and husband Joe Scarborough] friends and Republicans in the Senate and in the House. And President Trump whose presidency is killing people. By tens of thousands.”
— Co-host Mika Brzezinski on MSNBC’s Morning Joe, December 4.

Down with “The Mad King!” and “Itinerant Dictator!”

“We are witnessing the Mad King in the final days of his reign, willing to scorch the Earth of his country and bring down the whole system to undermine our whole democracy, strip it of its legitimacy, poison the confidence of our people in the institutions and the constitution for Donald Trump’s own petulant, selfish, rabid ends. We have a President of the United States for the first time in our history sabotaging this country….Will these Republicans continue to allow it for another day?...Our system cannot handle, was not designed, neither our Constitution or our institutions to handle an aberrant, Mad King like Donald Trump.”
— CNN political analyst and former Washington Post editor Carl Bernstein on CNN New Day, November 20.

“Donald Trump continues to behave like an itinerant dictator….bulldozing over our democracy and hunkering down in the White House, refusing to relinquish the reins of government or even to admit he’s been fired by the American people….Trump is no longer an autocrat in the making, he’s already there….Trump’s focus is on his power and his ego, and perhaps on that orange jumpsuit that may be waiting once he leaves office. His focus is nowhere near his duty to protect the American people from a raging pandemic which has now taken more than 251,000 lives and behind every strongman is his supine party, the fixers, and the king-makers, and the thugs who enable him.”
— Host Joy Reid on MSNBC’s The ReidOut, November 18.

“As you look at home from there, and when you come home on your next visit, do you view it [United States] as a changed country because millions of people decided — maybe over time like the frog boiling experiment — to become at least tyranny-curious?”
— Host Brian Williams to Yale history professor Timothy Snyder on MSNBC’s The 11th Hour with Brian Williams, November 13.

Acosta Reveals How He Really Feels About Trump

“He’s been tweeting this evening, talking about how he’s won this state and that state. We have to pay attention to those tweets now, Anderson, because he’s the president. After January 20th, he just goes back to being another crackpot on the Internet.”
— Correspondent Jim Acosta on CNN’s Anderson Cooper360, November 13.

Evil Republicans Have Trapped Us All Inside a Burning House!

“Imagine, if you can, being in a house that’s on fire and while you can hear the fire department sirens in the distance, rescue is so close. You can't get out because someone has bolted the door. America is in a national coronavirus crisis. Our house is on fire and Republican elected officials are doing the equal of locking the door with the American people trapped inside.”
— Host Joy Reid on MSNBC’s The ReidOut, November 16.

“Republicanism...Has to Be Isolated and Snuffed Out”

“Republicanism is no longer a political problem; Republicanism is a social problem. It must be treated in the same way coronavirus is treated: it has to be isolated and snuffed out by repressing it in about 70% of the general population.”
— November 21 tweet by New York art critic Jerry Saltz. Saltz deleted the tweet later.