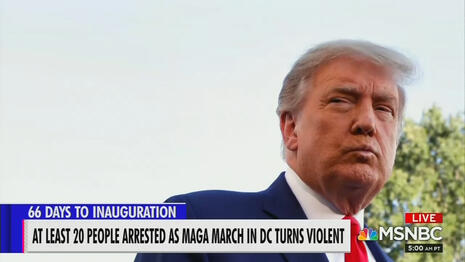 Donald Trump’s supporters turned out to peacefully show their support for the President on Sunday, but were viciously attacked by pro-Joe Biden counter-protesters from ANTIFA/BLM.

Fox News reported “#Walkaway campaign spokesperson Karlyn Borysenko said on Monday that the ‘Million Maga March’ started as a ‘wonderful day’ until it devolved into violence when counter-protesters attacked. “It got very violent very quickly.”

So who did CNN and MSNBC blame for these attacks? Donald Trump, of course.

In the wake of the violence, MRC analysts looked at MSNBC and CNN’s live programming from 6am through 6pm EST on Sunday, November 15 (24 hours total). They found that, out of a total of 17 minutes, 52 seconds of coverage devoted to violence at the Million MAGA March, Donald Trump and his supporters were 8x more likely to be blamed (6 minutes, 9 seconds) for the unrest than the ANTIFA/Pro-Joe Biden counter-protesters (45 seconds).

Overall MSNBC devoted 15 minutes and 48 seconds to coverage of the fighting with 5 minutes, 22 seconds devoted to blaming Trump and his supporters to just 27 seconds faulting Pro-Biden counter-protesters.

CNN spent a total of 2 minutes, 4 seconds on violence of which 47 seconds was spent attacking Trump and his supporters for violence to just 18 seconds assigning blame to ANTIFA/Biden supporters.  (Warning: Video contains graphic violence and strong language.)

A segment that appeared at 6:07am EST on the November 15 edition of MSNBC Live with Kendis Gibson and Lindsey Reiser was typical of the coverage. Gibson and Reiser invited GOP communication strategist/The Lincoln Project co-founder and NeverTrumper Jennifer Horn and Democratic strategist/former GLAAD chief programs officer Zeke Stokes to tag-team against Donald Trump. Horn charged “This is exactly what the sitting President of the United States of America wants to see in our streets. He’s been sowing chaos and division and practically calling for violence since long before Election Day.”

Stokes added: “What we’ve seen is the Republican Party is largely silent. And leaders like Ted Cruz, Lindsey Graham, others going on other networks and really inflaming this chaos and calling for this kind of reaction.”