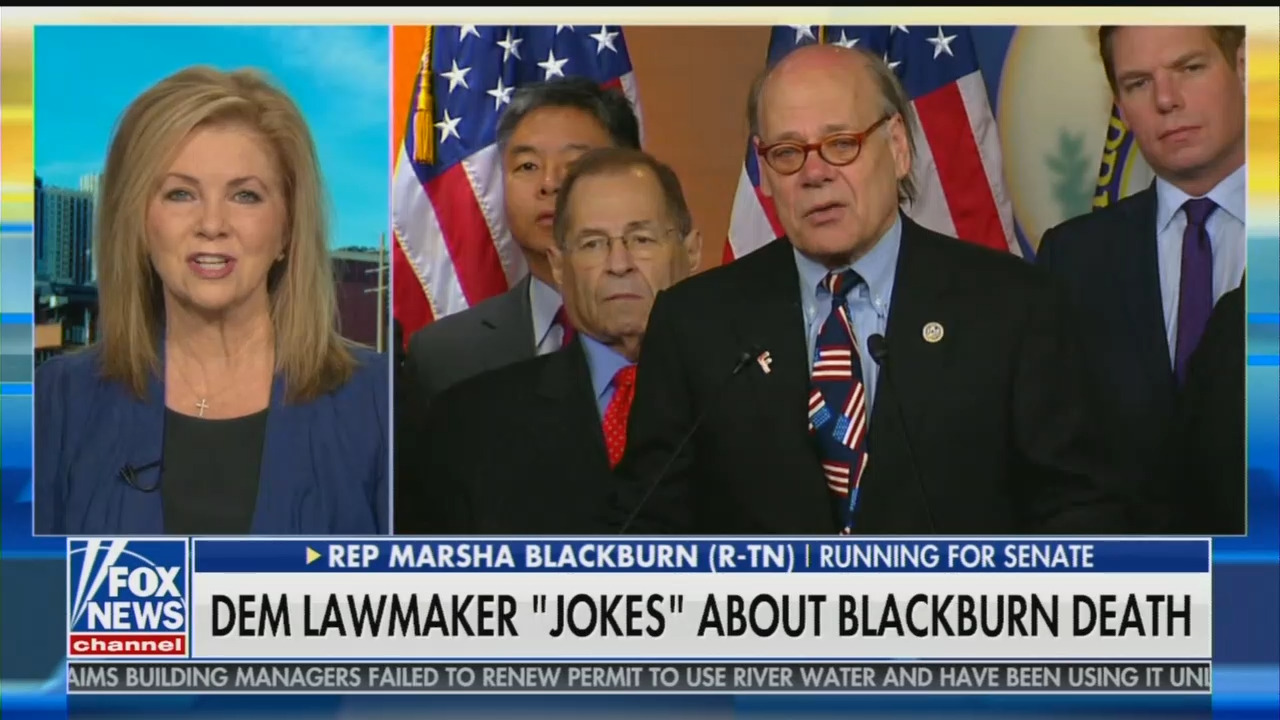 To hear the liberal media tell it, you’d think Donald Trump and the Republicans are solely responsible for lowering the public discourse.

NBC’s Meet the Press host Chuck Todd, squarely placed the blame on the President: “We’ve seen this rise in sort of hot political rhetoric....We’ve seen a rise in hate-filled speech...we have a problem and we have a President who doesn’t seem to believe he has a role to play in dealing with it. And I think that is what is making this more of an uncomfortable situation in our politics.”

Yet, many prominent Democrats in this election cycle have uttered heinous and insulting words about public figures and treated their fellow Americans terribly, but you probably never heard about them if you only got your news from the Big Three (ABC, CBS, NBC) network news shows.

The following is a list of the some of the most offensive things Democratic candidates have done this election cycle that the Big Three networks are burying, or outright censoring: 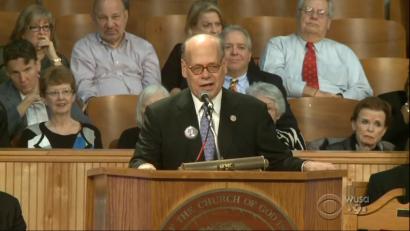 Cohen was appearing at a community prayer breakfast at a Memphis church hosted by former Gov. Phil Bredesen’s campaign for Senate.

“The big orange president .... He’s going to come down here and he is going to endorse Marsha Blackburn, because Marsha Blackburn, if he says, ‘Jump off the Harahan Bridge,’ she’ll jump off the Harahan Bridge,” he said in the audio obtained by HuffPost, referring to a bridge over the Mississippi River connecting Arkansas and Tennessee. “I wish he’d say that.”

The remark was met with laughter.

Incidentally, back in July, Cohen was forced to apologize to veterans for telling Russia investigation figure and FBI agent Peter Strzok that he deserved the Purple Heart.

Beginning on October 12, embarrassing comments made by Democratic Senate challenger Kyrsten Sinema’s were unearthed, including videos of her repeatedly insulting the citizens of Arizona, in general, and stay-at-home moms in particular.

One video showed the Democratic congresswoman blurting: “Over the past several years, people would watch what’s going on in Arizona and be like, ‘Damn, those people are crazy. Is it something with the water?” Another one (link) had Sinema making a drug addict reference: “The states are the laboratory of democracy. And then my state – Arizona – is the clearly the meth lab of democracy.”

On October 20 The Daily Caller reported the following:

Arizona Democratic Senate candidate Kyrsten Sinema in a 2006 interview characterized stay-at-home moms as “leeches” who essentially cash checks “off their husbands or boyfriends.” “These women who act like staying at home, leeching off their husbands or boyfriends, and just cashing the checks is some sort of feminism because they’re choosing to live that life,” Sinema told Scottsdale nightlife magazine 944 in 2006. “That’s bullshit. I mean, what the f*** are we really talking about here?”

North Dakota Democratic Senator Heidi Heitkamp infuriated sexual assault survivors when she outed them – without their permission – in an ad against her Republican opponent Kevin Cramer.

Sen. Heidi Heitkamp, a Democrat from North Dakota, apologized Tuesday after publicly naming victims of domestic violence and sexual abuse in an attack ad aimed at her Republican challenger -- this, after some of the women said they did not give permission for the campaign to name them, and others said they’d never experienced abuse.

Heitkamp released a statement apologizing for the gaffe....Heitkamp is facing a tough battle for re-election against Republican Kevin Cramer. The ad, which appeared in several North Dakota newspapers on Sunday, was an open letter to Cramer criticizing comments he’d made before Brett Kavanaugh was confirmed to the Supreme Court.

The ad was signed by more than 125 people, though some just listed their initials.

Several women came forward to criticize Heitkamp. Keeley Beck, one of the women who was included in Heitkamp’s ad, told Fox News on Tuesday that she “didn’t even know what it was about initially” when she learned that her name was on the list. Most women who were erroneously included on the list had a mutual friend who supported the open letter, Beck said. But she said she never gave  permission to add her name and “didn’t even click the link” to open the letter at first. “I’m angry. Everyone has a story and they should be able to be the person to tell it if they choose to,” Beck said.
...
Lexi Zhorela, 24, told The Associated Press she was listed in the ad because she had been tagged on Facebook by a friend who knew she had been the victim of sexual assault. “I’m furious,” she said. “I have only shared my story with a couple of people in confidence....I didn’t want it blasted for the world to see.” Zhorela said she’d intended to vote for Heitkamp in November but will “definitely not now.” After discovering her name listed on the ad, another woman, Kady Miller, wrote on Facebook: “I don’t even support Heidi Heitkamp and I am not a domestic abuse survivor. Should this even be legal??” The Washington Post reported.

Rep. Alcee Hastings, a Florida Democrat with a reputation for riling Republicans and weathering numerous controversies, entertained a crowd Sunday with a joke about President Donald Trump falling into the Potomac. The joke, at a rally sponsored by 16 of South Florida’s Broward County Democratic clubs, revolved around the difference between a “crisis” and a “catastrophe.” A crisis, he said, is if the Trump falls into the Potomac River in the nation’s capital, according to an account in the Florida Sun Sentinel.

A catastrophe, Hastings said, would be if “anybody saves his ass.”

The quip was one of many Hastings aimed at the President during the event, which he emceed. It was attended by four of the five Democratic candidates for governor and Democratic U.S. Sen. Bill Nelson, who is seeking re-election. Nelson and the gubernatorial candidates had left by the time Hastings delivered his one-liner, the newspaper reported.

Democratic Congressman Joaquin Castro made a wild claim (without any evidence) on CNN that White House adviser Jared Kushner was behind the killing of Washington Post columnist Jamal Khashoggi.

On October 19, The Hill reported the following:

Rep. Joaquin Castro (D-Texas) on Friday accused senior White House adviser Jared Kushner of orchestrating the killing of Saudi-born Washington Post columnist Jamal Khashoggi. Castro, who serves on the House Intelligence Committee, told CNN he did not have substantial evidence to support his claim, but repeatedly cited media reports on the subject. Castro cited unspecified reporting “that Jared Kushner may have, with U.S. intelligence, delivered a hit list, an enemies list, to the crown prince, to MBS, in Saudi Arabia and that the prince may have acted on that.”

CNN host Poppy Harlow attempted to clarify what reporting Castro was referring to, saying CNN had not reported on that accusation. Castro continued, saying “I’ve seen reporting to that effect...That needs to be investigated.”

Castro later clarified his comments, tweeting that he did not intend to accuse Kushner of orchestrating the killing and noting he meant to express that he wants Congress to open an investigation into whether U.S. intelligence was shared with Saudi Arabia that may have led to Khashoggi’s death.

He also linked media reporting that highlighted ties between the Trump administration and Saudi Arabia.

“To be clear, I did not intend to accuse @jaredkushner of orchestrating anything,” Castro tweeted. “Based on press reporting, I’m asking for Congress to open an investigation of whether any US Intelligence was shared with Saudi Arabia that led to political persecution or killing of #Khashoggi.” White House press secretary Sarah Huckabee Sanders later condemned Castro's remarks, calling the allegation “outrageous” and “slanderous.” 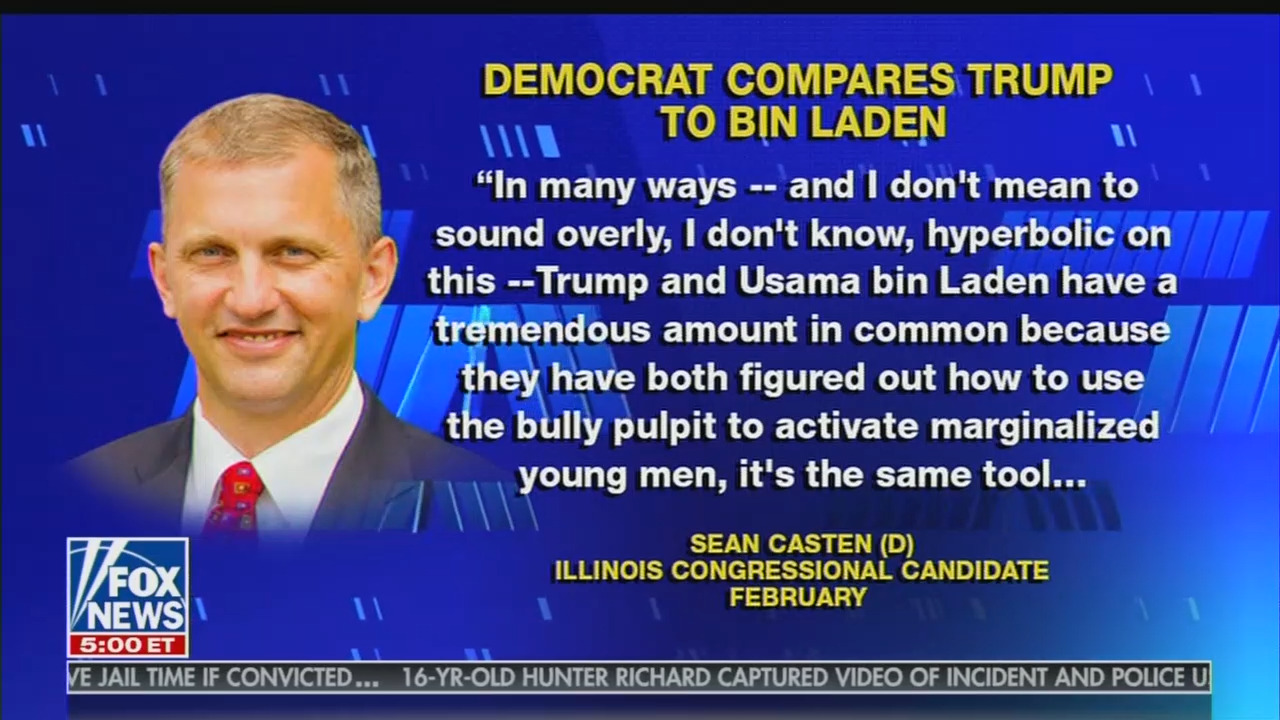 “In many ways—and I don’t mean to sound overly, I don’t know, hyperbolic on this—Trump and Osama bin Laden have a tremendous amount in common,” Casten said, according to audio of a February meeting with voters....Casten, a “clean energy entrepreneur” who emerged on top of a tight primary in Illinois’ sixth district in March, made the bizarre comparison after he was asked by a voter for his plans to advance gun-control legislation if he were elected. The comment was part of Casten’s explanation that gun-control opponents, whom he appears to be comparing to al Qaeda supporters, are what will keep gun-control legislation from advancing to the House floor.

“They have both figured out how to use the bully pulpit to activate marginalized young men,” Casten said. “Every demagogue has done this—find a group of angry people and give them something to be angry at.”

Democratic Senator Joe Donnelly made some racially awkward statements, at his October 30 debate with Republican Congressman Mike Braun, about his own staffers.

Sen. Joe Donnelly (Ind.), a conservative Democrat in one of the tightest reelection battles in the country, made a cringeworthy and puzzling statement about some minorities on his staff during a debate Tuesday night.

To begin, here’s a quick vocab refresher. The definition of the word “but,” according to Google, is “to introduce something contrasting with what has already been mentioned."

So it was strange when Donnelly, in what seemed like a genuine effort to compliment his aides, said this when asked how he would bring diversity into his staffing:

Donnelly followed that bizarre phrasing with a sentiment about inclusiveness and diversity.

“It isn’t their race or their religion. It’s the incredible person that they are,” he said. “But at the same time they have to have a chance, they have to have an opportunity, and that’s my responsibility. And I’ve done it in every office I’ve had and I’ve done it in every campaign I’ve had because my campaigns and our Senate office should reflect the face of Indiana.”

But (correct usage here, Senator), it was overshadowed by what he said first, which suggested that these staffers did a good job despite their race.