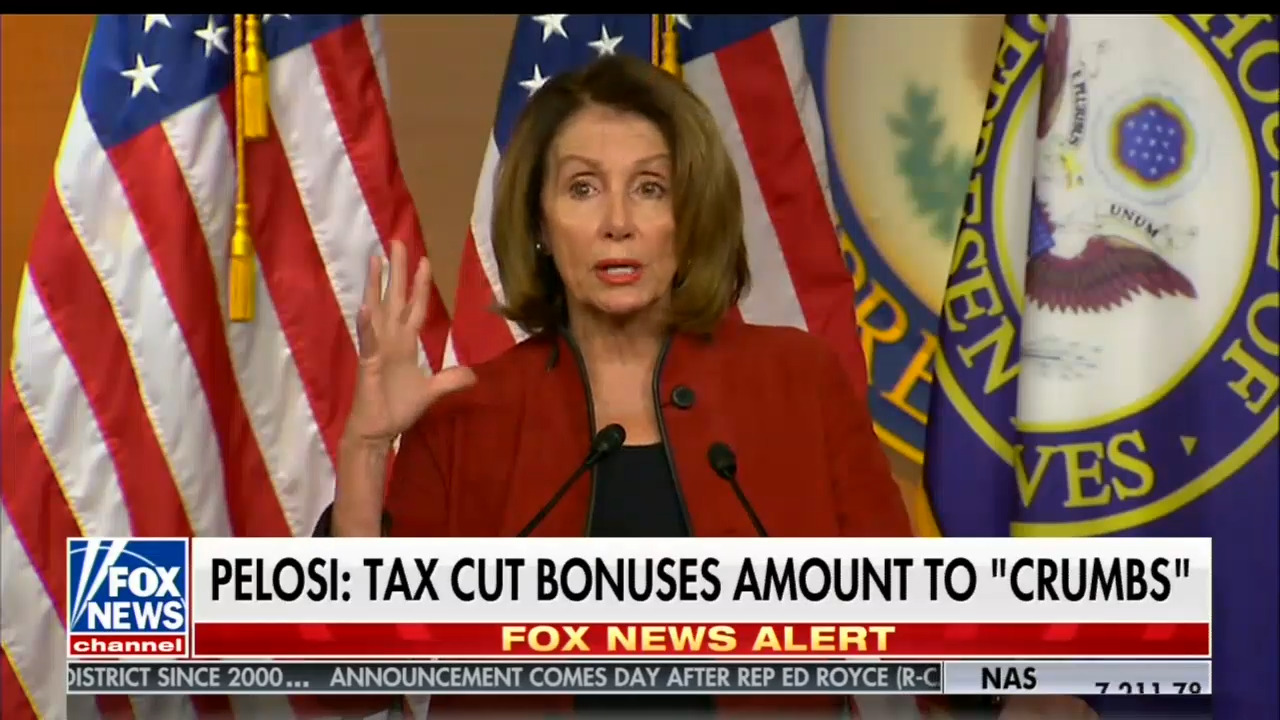 When Democratic Minority Leader Nancy Pelosi, in a January 11 press conference, belittled the $1,000 bonus that Walmart workers were going to get (via the tax cut) as mere “crumbs” CNN and MSNBC offered the elitist comment a mere 17 seconds in a week’s worth of coverage.

But when GOP House Speaker Paul Ryan, on February 3, posted (and then later deleted) a tweet that celebrated a school secretary being “pleasantly surprised” that her extra $1.50 a week – via the GOP tax cut – allowed her to afford a Costco membership, CNN and MSNBC’s anchors and pundits howled at Ryan’s perceived gaffe.

In just a 24-hour period (February 4 through February 5) CNN (10 minutes, 52 seconds) and MSNBC (10 minutes, 11 seconds) filled their programs with a total of 21 minutes, 3 seconds of coverage of Ryan’s tweet or 74 times more coverage than they devoted in a week’s time of Pelosi’s “crumbs” insult.

The entire 17 seconds of “crumbs” coverage came in an interview with conservative commentator Carrie Sheffield on CNN’s January 15 edition of At This Hour. (MSNBC had zero seconds of coverage in that first week.)

What makes this contrast even more staggering is the cable networks usually prefer video over a boring graphic of a tweet. But only Fox News, in that first week of coverage, offered video of Pelosi’s dismissive “crumbs” comment in a January 11 press conference that was available to all the cable nets.

Of course, the hosts and pundits at CNN and MSNBC couldn’t get enough of Ryan’s tweet. MSNBC host Joy Reid’s depiction of Ryan in Dickensian terms was typical of CNN and MSNBC’s coverage:

HOST JOY REID: This week House Speaker Paul Ryan, attempted one heck of a pivot, spinning a question about the Nunes memo into a complaint about Democrats’ lack of appreciation for his new tax bill, the tax bill that as Ryan bragged yesterday on Twitter is working so well that, quote, “A secretary at a public high school in Lancaster, Pennsylvania, said she was pleasantly surprised her pay went up $1.50 a week. She said that will more than cover her Costco membership for the year.” $1.50 a week? That’s like an extra dollop of gruel for Oliver Twist! Quickly someone fetch me my monocle and top hat! I think little Oliver is dancing and dancing with joy for the extra dollop of gruel! Ryan, quickly deleted the tweet, but it did not stop him being dragged on Twitter for the rest of the day.