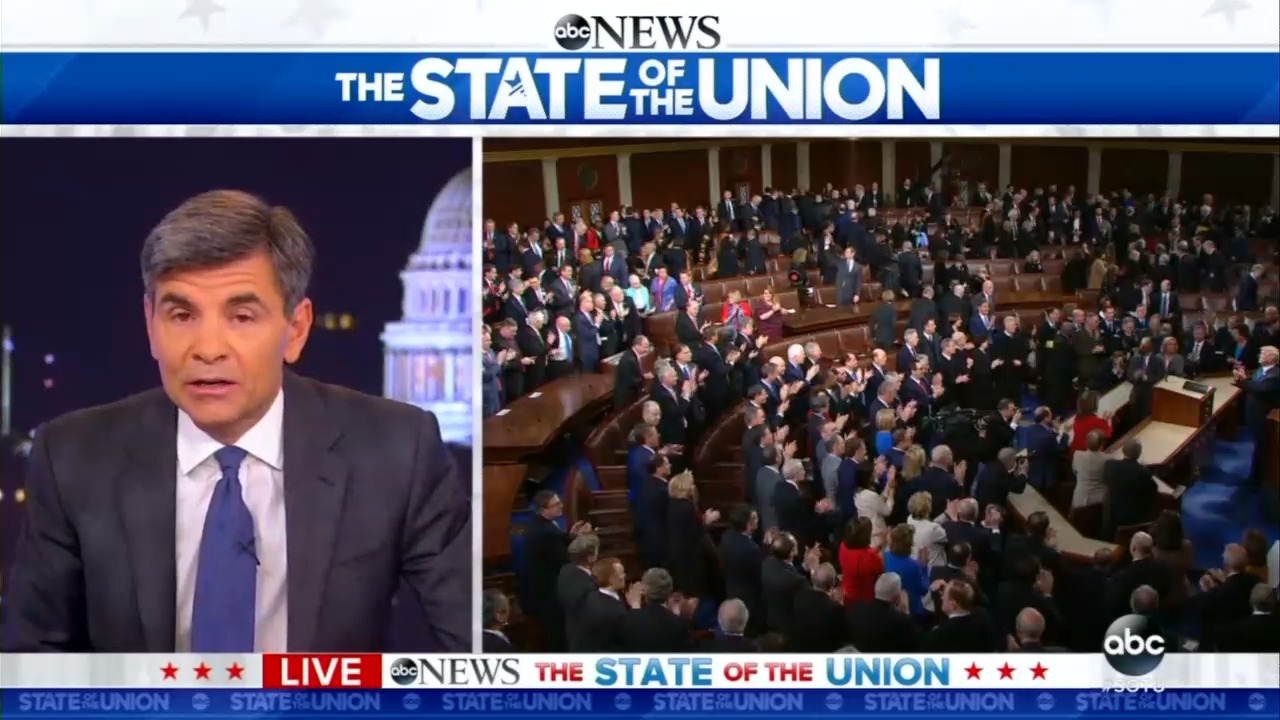 Donald Trump’s State of the Union address was immediately panned by liberal reporters, hosts and celebrities as a “divisive” speech that stoked “racial tensions” by emphasizing offensive themes like “church” “family and the “military.” Yes, you saw that right. MSNBC’s Joy Reid was appalled that Trump promoted those “terms of the bygone era.”

On ABC, correspondent Cecilia Vega charged Trump was “stoking” racial tensions by “bringing up this issue of kneeling during the National Anthem.” Her colleague Matthew Dowd repeatedly slammed the “divisive” address as he huffed: “Calling this a healing speech is almost like....going on a diet by drinking a Diet Coke and eating a pizza.”

The snide and insulting coverage of the State of the Union began even before the speech when MSNBC’s Rachel Maddow delighted by someone delivering a “One-fingered salute” to Trump’s motorcade.

And of course the Hollywood left had to get in their shot as well. Actor/director Rob Reiner charged that the “racist” and “misogynist” Trump “just lies all the time” and added: “But when you write the speech down and you lie with words that you have prepared, that takes lying to a new level.” The West Wing actor Bradley Whitford told Chris Matthews: “I feel like we’re floating in a river of civic dysentery.”

The following are the most egregious examples of anti-Trump liberal media hate that surrounded his State of the Union address:

“Church...family...police... military...the national anthem...Trump trying to call on all the tropes of 1950s-era nationalism. The goal of this speech appears to be to force the normalization of Trump on the terms of the bygone era his supporters are nostalgic for. #SOTU”
— January 30 tweet by MSNBC’s AM Joy host Joy Reid.

ABC Melts Down Over SOTU Speech

Host George Stephanopoulos: “One thing is pretty clear, Jon. He did not unify that chamber tonight.”
Correspondent Jonathan Karl: “George, I’ve never seen anything like it. Right now, the Democrats have basically run for the exits. I mean, usually when the President leaves, you still have members applauding. He did not unify this chamber, particularly on the issue of immigration. Not a single Democratic applause on his immigration proposal.”...
Correspondent Cecilia Vega: “One of the things that he said, though, George is that he wants to –  have the country set aside the differences and went on to talk about undocumented immigrants as MS-13 gang members, demonizing them. I think he’s going to have a tough sell when he’s trying to sell unity and bringing up this issue of undocumented immigrants as criminals for a lot of people....Again, sort of stoking, I think many would say, racial tensions by bringing up this issue out of kneeling during the National Anthem.”...
Political analyst Matthew Dowd: “If the president had met with me after the speech, I would say to him, well, that was how not to give a unifying speech. So, let’s going back and give a unifying speech. As everybody has mentioned, he mentioned ObamaCare – ending ObamaCare? Divisive. Mention the tax cuts? Divisive. Mentioned a whole riff on immigration? Divisive. And the National Anthem? Divisive. Calling this a healing speech is almost like calling, going on a diet by drinking a Diet Coke and eating a pizza. That’s as much of a healing speech this was.”...
Correspondent Martha Raddatz: “It was also just a particularly gloomy speech. I mean, he didn’t mention the word carnage, but he talked a lot about carnage. It was a sad speech there at the end and did not unify, exactly what everybody is saying about not unifying.”...
Political analyst Cokie Roberts: “Talking about the national – standing for the national anthem, there were many African-Americans members of Congress there wearing kente cloth – African cloth. The President never mentioned Africa, never said anything like that, so, there was not anything there for them to relate to.”
— ABC News live coverage of the State of the Union speech, January 30.

“She [Melania Trump] did drive up separately this evening from the White House to the capitol...We do hear from the White House, however Wolf, they will be driving home together. The President and the First Lady will share the ride home. But it is, again, bucking tradition that she drove up on her own....You know, she’s wearing a cream-colored suit there, which I find interesting. Remember last year the female Democratic senators all wore white – a bunch of them –  to protest Trump’s policies against women. So there was even a hashtag: #WomenWearWhite. Listen, it could be a total coincidence, but I just find a lot of the stuff she does these days, to look at it twice.”
— White House reporter Kate Bennett during CNN’s live coverage of the State of the Union Address, January 30.

“It was an odd feeling watching this speech....I don’t remember a time when you would watch a State of the Union address being delivered by a President who is, I guess you could say, actively betraying the country.”
— Political analyst Ron Reagan Jr on MSNBC’s live coverage of the State of the Union, January 31. (12:53am ET).

“I felt like he [Trump] spoke more to his base than I expected him to, particularly on immigration and that could be part of his sales pitch. Maybe he knows that amnesty for 1.8 million is something his base doesn’t like, so he led with the, let me paint the picture of the –  this mythical immigrant criminal here that I want everybody to get fired up about.”
— Meet the Press host Chuck Todd on NBC New’s live coverage of State of the Union, January 30.

Host Chris Matthews: “It almost got ugly. Very tough about saying immigrants are basically killers. MS-13. Beginning a discussion about immigration in a country of immigrants with crime. And that was his way of opening up the discussion like I’m protecting us from criminal elements. I thought that got very ugly about that point.”...
Political analyst Eugene Robinson: “I thought he was demagogic on immigration. I mean, that’s when the speech got sort of dark.”...
— MSNBC’s live coverage of the State of the Union speech, January 31.

“Immigrants are all MS-13 members. And I’m sure everybody is, you know, going home tonight terrified that MS-13 is going to attack them on the way home. As Joy said, really who runs into these people. Well I’m not saying that they don’t exist, but c’mon it’s not exactly a national scourge here.”
— Political analyst Ron Reagan Jr on MSNBC’s post-State of the Union coverage, January 31.

“I think his rhetoric last night set things back, did not advance the ball forward. Because while on immigration, while the tone was an attempt at bipartisanship, the way he sold immigration really offended a lot of Democrats that were listening in that room. And I actually think he made that situation harder today than it was before the speech.”
— Meet the Press host Chuck Todd on NBC’s Today, January 31.

Host Brian Williams: “We’ve been watching everything from inside the chamber. We saw Karen Pence arrive and take her seat. We saw the motorcade around what is really the final turn as it heads up to Capitol Hill. It encountered a small but vocal, as they say, group of protesters including a gentleman you seen who had a funny way of waving to the motorcade.”
Rachel Maddow: “One-fingered salute!”
Williams: “He was by my count eight fingers short of a full, two-handed wave there. So, I don’t know what it is we witnessed there.”
— MSNBC live coverage of State of the Union, January 30.

“Let me throw down the gauntlet NOW: If anyone comes on my tv tomorrow night after the SOTU saying whatever speech Trump READS somehow makes his sound good/presidential/unifying, I’m turning you off and never listening again.”
— New York Times columnist Charles Blow in January 29 tweet.

Sad That “Intelligent People” Have to Watch “Racist” “Liar” Trump

“It was one of the flattest State of the Union performances I’ve ever seen....I feel bad for you, intelligent people like you [Chris Matthews] and Rachel [Maddow] and Brian Williams and Nicolle Wallace and Lawrence O’Donnell and Gene Robinson, you all have to sit there and talk about this guy as if he’s a president....The guy is a racist. He’s a misogynist and he’s an pathological liar. Here’s what’s interesting about this State of the Union tonight. A pathological liar is somebody who can’t help but lie. He just lies all the time. We know that to be true about Trump. But when you write the speech down and you lie with words that you have prepared, that takes lying to a new level. I mean, he lied about the biggest tax cut in history. He lied about the Visa program. They’re just lies. It’s one thing to lie off the cuff, but when you write down a lie and you say it, how are we supposed to judge what we just saw there? It was ridiculous.”
— Actor Rob Reiner on MSNBC’s post-State of the Union coverage, January 31 (12:09am ET).

“People always accuse the West Wing and it is to a certain extent a fantasy, but one thing that wasn’t a fantasy, even with politicians who I really disagree with is that there were seven people around that President who truly believed in the non-cynical way that the president was trying to do the right thing. We are in uncharted territory now, I mean, I feel like we’re floating in a river of civic dysentery....When I see Trump, I feel like I’m watching a professional wrestler with the crazy hair and the man tan and the hot chicks.”
— The West Wing actor Bradley Whitford on MSNBC’s live coverage of State of the Union,  January 31 (12:36am ET).

“Tonight, Shitler is going to read a speech filled with lies and falsehoods. He will say things that sound reasonable, but won't mean any of them. Pundits will declare him to be Super Totally Presidential For Real This Time. Do not be fooled. He is a liar, a racist, and a disgrace.”
— Star Trek: The Next Generation actor Will Wheaton in January 30 tweet.

“I’m not watching some frothing orange gorilla read off a teleprompter. I’ve got better things to do, like alphabetize my spice cabinet. #StateOfTheDream.”
— Star Trek actor George Takei in January 30 tweet.

“I was thinking about that A-hole who yelled ‘you lie’ to Obama during his State of the Union.  I wonder if the whole congress is going to do that in unison tonight.”
— Actor/director Albert Brooks in a January 30 tweet.

“Here’s my fun tweet about the #SOTU: the President is a lying, incompetent, racist, misogynistic sack of shit. Please register to VOTE in the Midterms on Nov 6th: http://vote.gov.”
— Actor/comedian Billy Eichner in January 30 tweet.