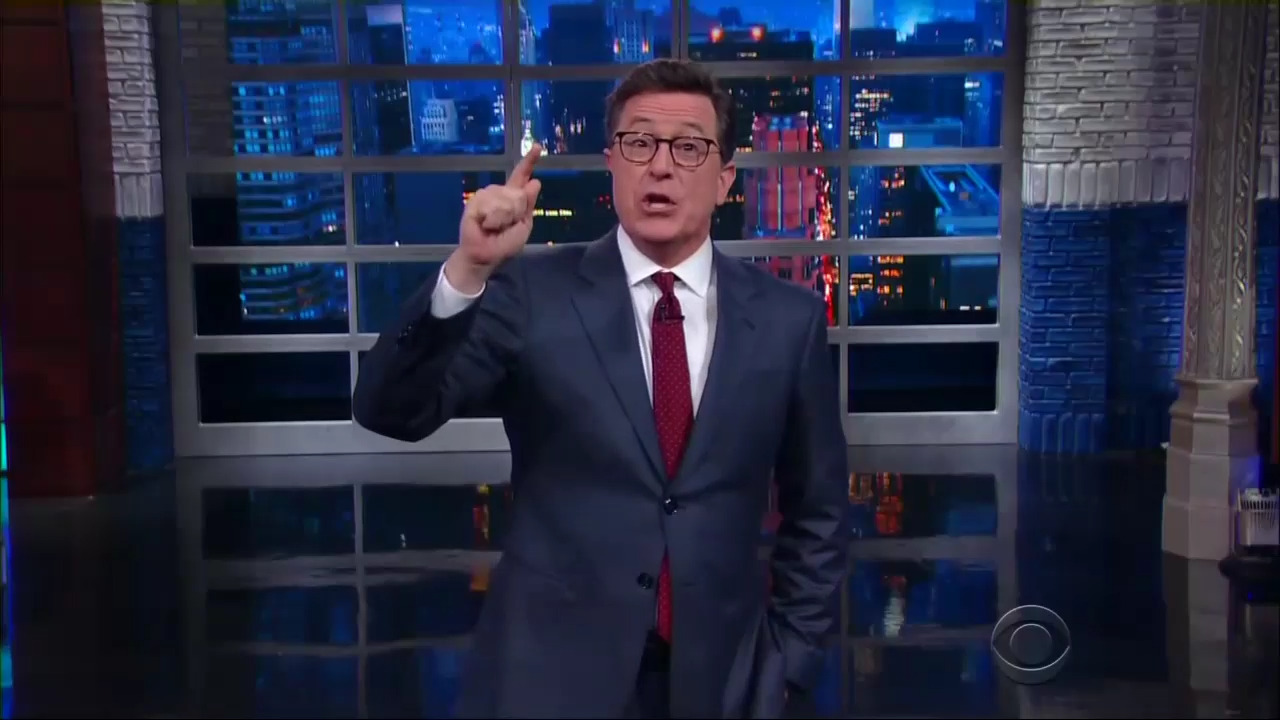 It’s not just the press that are freaked out by Donald Trump. Talk show hosts and celebrities from Stephen Colbert to Robert DeNiro, Katy Perry and Rosie O’Donnell are losing their minds over the new president: DeNiro claimed Trump was worse than con-man Bernie Madoff: “He’s a pig”; Perry whined that Trump’s election brought “a lot of trauma for me”; Colbert infamously characterized Trump’s relationship with Vladimir Putin in the most obscene terms; and O’Donnell sounded like she was fomenting a revolution: “We have never had this kind of treasonous madness in power before. Desperate times - desperate measures.”

And it’s not just Trump that has celebrities up in arms. HBO host Bill Maher called the GOP the “party of climate denial” and compared them to the mass-murdering Syrian dictator Bashar al-Assad: “We talk about Assad gassing people, we’re gassing them, too. We’re just doing it slower with CO2.” The Republican attempt to repeal ObamaCare caused actress/singer Bette Midler to erupt on Twitter: “So the #homegrownAssads in the #FreedomCaucus want employers to not have to offer health care to employees. Like gassing their own people!”

The following are just some of the worst celebrity freak-outs from the past few months:

“Mr. Trump, your presidency, I love your presidency. I call it, it ‘Disgrace the Nation.’ You are not the POTUS, you’re the BLOTUS (Biggest Liar of the United States), you are the glutton with the button. You are a regular ‘Gorge Washington.’ You are the Presi-dunce, but are turning into a real prick-tator. Sir, you attract more skinheads than free Rogaine. You have more people marching against you than cancer. You talk like a sign language gorilla who got hit in the head. In fact the only thing your mouth is good for is being Vladimir Putin’s c**k [bleep] holster.”
— Host Stephen Colbert on CBS’s The Late Show, May 1.

“I’m disappointed that this man is representing me and my country. It makes me sick...I don’t know. He’s demonstrated himself to be a man without a core, a man without a soul. Is there a guy in there?”
— Comedian and former CBS Late Show host David Letterman in the June 2017 issue of GQ magazine.

“I was really disheartened for a while; it [Trump’s election] just brought up a lot of trauma for me. Misogyny and sexism were in my childhood. I have an issue with suppressive males and not being seen as equal. I felt like a little kid again being faced with a scary, controlling guy....But it’s an awakening that was necessary because I think we were in a false utopia ...we can’t ever get that stagnant again.”
— Singer Katy Perry in an April 13 Vogue interview.

Melania Would Be “American Hero” If She Divorced Trump

“I have a fantasy, like I want Melania to just finally come out and divorce him, and she would be an American hero. We would embrace her if she just said, ‘Listen. This guy is disgusting, and I know all his dirty secrets and I’m willing to tell everybody.”
— Comedian and talk show host Chelsea Handler on ABC’s The View, May 22.

“That foundation of America’s greatness, what he’s building that on — it turns out he’s building that foundation out of the ground-up bones of poor people. Because this budget cuts things like the food stamp program SNAP and the Children’s Health Insurance, CHIP. So he’s cutting SNAP and CHIP. To which America’s children replied, STOP and HELP. I know this is an unpopular position these days, but I believe children should go to the doctor and eat.  Where do I find the courage? Where do I find the courage? Not in the White House. ”
— Host Stephen Colbert on CBS’s Late Show, May 23.

“Today I gratefully give my mother the gift of having been dead for 25 years and not having to see what a tub of fuckery our country’s become.”
— May 14 tweet by Avengers director Joss Whedon.

@Rosie: “WHEN TRUMP GOES, SO DOES SESSIONS. AND GORSUCH GETS REMOVED. GARLAND SWORN IN. EVERY EO INVALIDATED. WE TAKE THE COUNTRY BACK #AMERICA”...
@MysteryTVWrtrAS: “But to remove a Supreme Court Justice, there’s nothing in the Constitution. It’ll literally take an insurrection. You have an Army ready?”
@Rosie: “No I do not. We have never had this kind of treasonous madness in power before. Desperate times - desperate measures.”
— May 16 Twitter exchange by former ABC’s The View co-host and comedian Rosie O’Donnell.

Tolerant Ellen Has No Tolerance for Trump

Host Matt Lauer: “Would you like him [Donald Trump] to come on the show?”
Ellen DeGeneres: “No.”
Lauer: “Why not? Why not? Why wouldn’t someone like you like to sit down opposite the president of the United States?”
DeGeneres: “Because I’m not going to change his mind. He’s against everything that I stand for.”
— NBC’s Today, May 5.

“What amazes me is that (Donald Trump is) such a bad con artist. Bernie Madoff was a guy who was low-key. I make no excuse for him: what he did was horrible and awful; monstrous. But Trump is in your face every day doing something that is absolutely — what word can I use? He’s just a slob. He’s a pig.”
— Actor Robert DeNiro in May 18 USA Today article.

Trump “Castrating and Decapitating” His Way to “War on Wildlife”

“It doesn’t seem like this administration cares about science –  for example, their dark age denial of climate change. When you take their viewpoint on climate change, you mix it in the border wall, and you take how they’re basically castrating and decapitating the governmental institutions like the EPA, the Department of the Interior, the National Oceanic Atmospheric Administration, the U.S. Fish and Wildlife Service –  you take these prime institutions and which they are decapitating and castrating. It’s a brilliant strategy to wage a war on wildlife, but this is the strategy that this administration has taken....I basically give this administration an ‘F’ –  and that’s an ‘F’ for ‘frightening.’”
— Animal Planet host Jeff Corwin on MSNBC Live, April 16.

“There’s a ‘March for Science’ in Washington and 400 cities tomorrow. I hope you join that. The Republicans have a competing ‘March for Ignorance’ that's going on. Sorry, S.E., but, you know what, it is the party of climate denial, and they have an awful lot to answer for....The Syrian problem started with climate change. It did –  75 percent of Syrian farms failed. A million and a half people migrated to the cities. That’s where it began. And, by the way, these people who are starving, which is, you know, whether you’re bombed or you’re sarin gassed or you’re starving, death is death. But, I mean, we talk about Assad gassing people, we’re gassing them, too. We’re just doing it slower with CO2.”
— Host Bill Maher on HBO’s Real Time, April 21.

“So the #homegrownAssads in the #FreedomCaucus want employers to not have to offer health care to employees. Like gassing their own people!”— May 6 tweet by actress/singer Bette Midler.

“A lot of us thought, oh Ivanka is gonna be our saving grace. You know? When he’s about to fucking nuke Finland or something, she’s gonna walk in the bedroom and you know? ‘Daddy, Daddy [begins jerking motion with hand]. Don’t do it daddy.’”
— Host Bill Maher on HBO’s Real Time, May 5.

Correspondent Rita Braver: “Have you gotten mostly positive response or do people go after you because they’re Trump fans?”
Alec Baldwin: “Sixty to 75 percent of the people I encounter treat me like I was Jonas Salk and I cured polio. They walk up to me and go, ‘My God! Thank you! I can't thank you enough. What you’re doing is so important!’”
— CBS Sunday Morning, April 3.

Trump is the “Poster Child for White Supremacy”

“That was my issue when people were going in there to meet with him –  whether it was Kanye or whether it was Steve Harvey or whether it was, you know, Jim Brown, whoever he was –  not that they shouldn't be meeting with him, but when you go in there and meet, before you stand and smile and say, ‘This is a good man’ and take pictures, like, what about addressing the disrespect and disregard for our community that was done? And what about him being the poster child for white supremacy and standing for the people who look to devalue our lives?”
— Rapper Tip “T.I.” Harris on ABC’s The View, April 6.

Actor Holding Out for a Hero to “Take Out” Trump

“I’m every day shocked, surprised, and also I say to myself, ‘Oh, yeah, okay, this is probably what I should have expected.’...It is going to take a hero to begin standing up. And I keep looking to John McCain, and believe it or not, I keep looking to Lindsey Graham – of all the people. ...Of all the people, please stand up and start – because I do believe that those two guys, and they’re a pair, have a genuine love for this democracy and for this country. Are they actually going to stand up and say, ‘Enough, it’s time to take him out.’
— West Wing actor Richard Schiff as part of an MSNBC panel on Trump’s first 100 days, as aired on MSNBC Live, April 24.

“Today is a day Republicans are happy. They got their two favorite things –  a right-wing asshole on the Supreme Court and Trump finally blowing some shit up....In 2013, 98 Republicans signed a letter saying bombing Syria in response to a chemical attack was unconstitutional without congressional authorization. But this is different because Obama was President then. That would have involved bombing while black, and you can’t – can’t do that.”
— Host Bill Maher on HBO’s Real Time, April 7.

Filmmaker Rob Reiner: “This is the most scary time in our country in terms of leadership. We have a person who is clearly mentally unstable who has no understanding of government or policy –  who has no desire to know about it – is an egomaniac and is a pathological liar. I mean, it’s really scary what’s happening in this country.”
Actor Carl Reiner: “And to go from having the smartest President we’ve had since way back, to this guy, is like, it’s crazy.
Host Tavis Smiley: “It’s crazy.”
Carl Reiner: “It’s nuts. I mean, I feel so sorry for Obama. I can’t believe how he must feel today.”
— PBS’s Tavis Smiley, March 31.

Rachel Maddow: “There has never been a presidency, an administration that was this overtly hostile to the press....but at the same time, there has never been a president who is more addicted to the news about himself, and who is more responsive to the news, that he supposedly thinks is so worthless.”...
Host Seth Meyers: “Yeah. It’s a weird dance. It’s like one of those movies where the serial killer is also clearly in love with the person who’s trying to arrest him.”
— NBC’s Late Night with Seth Meyers, May 2.