RINO Nicolle Wallace Gets Her Own MSNBC Show 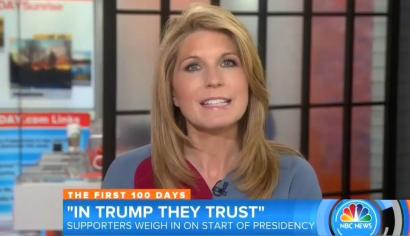 After a lengthy career as an NBC/MSNBC analyst spent trashing conservatives and admiring Democrats, so-called Republican Nicolle Wallace is finally being rewarded with her own show. Wallace’s show Deadline: White House will debut on Tuesday, and she fits the bill of an “MSNBC Republican” to a T.

The former McCain-Palin campaign senior advisor didn’t even vote for the candidates she worked for. And she has displayed that kind of disloyalty as a TV talking head. In her stints as a co-host on ABC’s The View and NBC political analyst, the former George W. Bush White House communications director has attacked Republicans from the “despised” Ted Cruz and “moronic” James Inhofe to the “un-American” Donald Trump, but offered kind words for Bill and Hillary Clinton.

Going back to 2014, she gushed that she was a “huge fan” of the idea of a Hillary Clinton candidacy and dismissed the idea of her husband’s scandalous past hurting her because “to know Bill is to love Bill.” However, in 2015 she essentially called Sarah Palin “mentally ill.” And during the 2016 campaign she accused Trump’s supporters of having “sinister sentiments.”

Most recently, Wallace labeled Trump’s immigration polices as “un-American,” and was stumped by Trump voters who refused to take her bait to criticize the new president.

The following are just a few examples, from the MRC’s archives, of Wallace’s most RINO-worthy performances:

Stumped by Trump Voters Who Still Support Him

Nicolle Wallace: “Do you think we should be banning people from countries that haven’t launched any attacks against the United States?”
Trump voter Judy Phelps: “I think that they ought to stop everybody from coming in, just let the country breathe and take a step back and figure out what’s going on.”
Wallace: “You don’t think that’s un-American?”
— NBC’s Today, February 10.

Nicolle Wallace: “On this farm, the President gets plenty of pasture, even for the controversial travel ban.”
Trump voter Brian Laplant: “Maybe he didn’t handle it the right way. But is there ever going to be a right way to handle that? If it keeps us safe, maybe that’s what we gotta do.”
Wallace: “Do you think that’s in line with our values as a country?”
— NBC’s Today, February 24.

Nicolle Wallace: “He [Donald Trump] is tapping into the most sinister sentiments in this country. People that are angry about the Obama administration.”...
Host Joe Scarborough: “And you said the word ‘sinister.’ Let me ask you, is my brother sinister? Because, I get texts all weekend back and forth. It doesn’t matter what it is. I get texts. Is your father sinister?”
Wallace: “My father is listening to his dark angels. And we’ve been fighting every night.”
— MSNBC’s Morning Joe, December 2, 2015.

Some Republicans Should Consider Voting for Hillary

Nicolle Wallace: “The conversations happening in private with Republicans, is that if you are not a social conservative there is less and less rationale for hardened opposition to Hillary Clinton. If you’re a social conservative there's no way you get there, if you care about that bucket of social issues, pro-life, what not, you can't make the leap to Hillary Clinton.  But if foreign policy is how you vote, if that is your central concern, if counterterrorism is what worries you, how do you not consider Hillary Clinton in November?”
Former Democratic Congressman Harold Ford, Jr.: “Well said.”
— MSNBC’s Morning Joe, March 21, 2016.

“The media, they hate her the most, okay? More than my party. They hate her. And even the most respected journalists said, you know, ‘Oh, the Clintonian penchant for secrecy is back.’ They have Clinton PTSD from the last Clinton presidency. They are done with her.”
— Co-host Nicolle Wallace, an ex-GOP campaign strategist, on ABC’s The View, March 11, 2015.

“We watch her [Hillary Clinton] speeches on the nights of the primaries live, and sometimes they sound – you know, that’s an intense environment. Those are huge crowds. I think that she’s so policy focused that she’s so effective and powerful in these settings. She seems to have sort of –  I don’t know. She’s pulled back a little bit. That attack on the guns is so, you know, I got chills. This is the third time I have heard it. And you know, I think when she makes an argument like that, in sort of a more serious tone, it’s deadly.”
— Nicolle Wallace on MSNBC’s Morning Joe, April 12, 2016.

“What’s the revelation, that the Clintons didn’t follow the rules? That the Clintons tried to hide stuff and that the Clintons are now acting like it’s a vast right-wing media conspiracy?...I’m not saying it’s not a story. I’m just saying, we’re going to talk about it, and then they’re all going to get turned over and it’s going to be a bunch of wedding stuff. I mean, who did she e-mail that we think we’re not going to see?”
— ABC’s The View co-host Nicolle Wallace on MSNBC’s Morning Joe, March 5, 2015.

Host Wendy Williams: “Now do you think that Hillary will run for president?”...
Nicolle Wallace: “I do think Hillary will run. I’m a huge fan of the idea of a Hillary Clinton candidacy. I’m really interested in seeing how she handles the gender issue because I think she’s learned a lot since last time....I think Hillary will be an incredibly strong candidate and I think it will be really, really, hopefully it will inspire my party to put up someone really great.”
— Syndicated Wendy show, October 22, 2014.

“To Know Bill Is to Love Bill” Clinton...

Co-host Jenny McCarthy: “But do you think Bill’s past will hurt her at all?”
Co-host Nicolle Wallace: “No. That’s baked in the cake. I mean, to know Bill is to love Bill, whether you’re a Democrat or a Republican. So, I don’t think it's going to affect anyone.”
— ABC’s The View, March 13, 2014.

...But She Really Hates Ted Cruz

“He [Ted Cruz] is truly despised. He is not viewed as a team player. I worked with him on the [2000 Bush/Gore] recount in Florida, and the recount was sort of ground zero for the biggest egos in both parties in the whole country, and he rose to the top in terms of hubris and egomania....These are good Republicans who worked in the Bush administration, clerks on the Supreme Court, who say they would have a really hard time voting for Ted Cruz if he were the Republican standard bearer.”
— Nicolle Wallace on Bloomberg’s With All Due Respect, December 29, 2015.

“[Sarah Palin] gave a speech this weekend in Iowa where again on full display were all the gaps in her knowledge and that’s what became obvious not just to the public but to us, and that was sort of chilling.”
— Nicolle Wallace on The CBS Late Show with David Letterman, January 26, 2015.

“The idea of a mentally ill vice president who suffers in complete isolation was obviously sparked by the behaviors I witnessed by Sarah Palin. What if somebody who was ill-equipped for the office were to ascend to the presidency or vice presidency? What would they do? How long would it take for people to figure it out? I became consumed by this question.”
— Time “Q&A with Palin Advisor-Turned-Novelist Nicolle Wallace” October 5, 2011.

Didn’t Even Vote for the Candidates She Worked For?

“On Election Day, Mrs. Wallace didn’t even vote for the McCain-Palin ticket. ‘I didn’t, I didn’t,’ she said slowly. She never received her absentee ballot — ‘and I was fine with that,’ she admitted.”
— Reporter Ashley Parker in an October 22, 2010 The New York Times article: “What Change Could Look Like.”

“What bothered me was that a man of his [GOP Senator James Inhofe] age and a man of his stature was throwing stuff inside that chamber....Where do you live that the weather isn’t all screwed up? Where do you live that you can’t tell that we’re having historic floods. He’s in Oklahoma. Maybe it’s just always cold and always hot. But the weather’s changing. And let me say on the politics of this, it’s terrible for the Republican Party to look like we can’t acknowledge reality...It is moronic to throw snow in the Capitol and say ‘I don’t know, I don't think anything is changing.’”
— Nicolle Wallace commenting on GOP Senator James Inhofe bringing a snowball into the Capitol, on ABC’s The View, March 2, 2015.