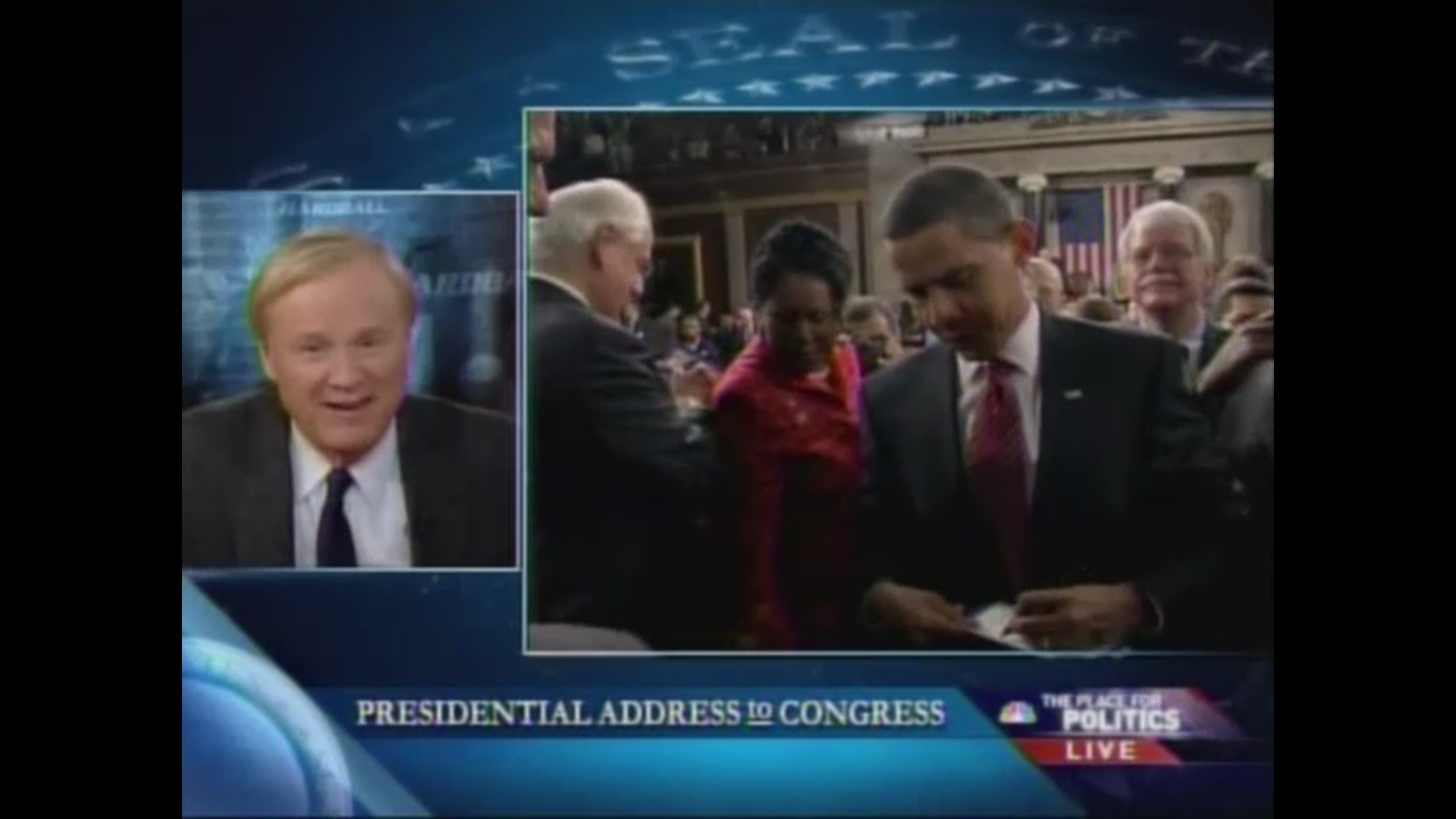 “He took us to the mountain tops.”

No, these aren’t movie critic blurbs on a movie poster praising a star actor’s performance, these were the immediate reactions from the liberal media to President Barack Obama’s first address to Congress. Will Donald Trump’s speech tonight receive similar accolades? Given the press’s hostility to the new president, it seems unlikely.

But back in 2009, the first takes on Obama’s speech were effusive. MSNBC’s Chris Matthews gushed “He wowed us!” CNN’s Jack Cafferty proclaimed “He’s got what it takes to lead this country back into the sunlight.”ABC’s George Stephanopoulos cheered that Obama “began on hope” and “ended on hope.”

Stephanopoulos’s colleague Terry Moran called the speech “big and bold” but never called it liberal, even though it was a wish list of leftist policies. On the other hand, Governor Bobby Jindal, who delivered the GOP response that night, was called a “Debbie Downer” by CBS’s Maggie Rodriguez.

The following is just a sampling of the most enthusiastic responses to Obama’s first address to Congress from the MRC archives:

“It was his debut and he wowed us. That’s the running headline from last night’s presidential address to the Congress.”
— MSNBC’s Chris Matthews opening Hardball, February 25, 2009.

“[President Obama] came right out of the box and said, ‘make no mistake about it, we are going to recover.’ That’s the most important thing he wanted the country to hear last night. He began on hope. He ended on hope. Now, in between, there’s an awful lot of hard things to be done....But I think he made a start at inspiring hope out in the country.”
— ABC's George Stephanopoulos on Good Morning America, February 25, 2009.

MSNBC’s Keith Olbermann: “What can the Republican response be?...How do you come out against recovering the nation’s sense of self and its optimism? How do you come out against words like ‘boldly,’ ‘wisely,’ ‘swiftly,’ and ‘aggressively?’”
Co-anchor Chris Matthews: “[Bobby Jindal]....is running for the outside rail of the Republican Party, the right-wing rail....That’s all the room that’s left on that side because Barack has grabbed the center with the charm he showed tonight in his excellent rhetoric.”
— MSNBC’s live coverage following Obama’s speech to Congress, February 24, 2009.

“Serene” Obama Will Lead Country “Back Into the Sunlight”

“But our president seems remarkably unruffled by all of this, serene in an inner confidence that he’s got what it takes to lead this country back into the sunlight....It was quite a performance....It occurred to me watching the president last night, Wolf, that he was born to do exactly what he was doing. He had that place in the palm of his hand for the entire time he was in that room, and that can be a tough audience, a tough room to work.”
— Host Jack Cafferty on CNN’s The Situation Room, February 25, 2009.

Obama “Took Us Up to The Mountaintops”

“A rousing speech, took us up to the mountaintops.”
— Senior political analyst David Gergen on CNN’s Anderson Cooper 360, February 25, 2009.

“It was a big and bold speech by a new President facing deep challenges and huge expectations, delivered at a crucial moment when the country has been battered by talk of bailouts and the reality, the harsh reality of recession. And while President Barack Obama didn’t sugarcoat it —  he found bad guys on Wall Street and in Washington —  he did try to strike an optimistic tone and a hopeful note that with patience and personal responsibility and by working together, the country can prevail and thrive.”
— ABC’s Terry Moran on Nightline, February 24, 2009. Moran offered no “liberal” label of Obama’s agenda.

We Have a President Again

“It made me feel pretty good. I mean, I thought it was a great speech....You know, a friend of mine said, ‘Oh my God, we have a President again!’ Now, in some ways, that’s not fair to Bush, but that’s the way you felt. You felt this was a guy who was totally in charge.”
— NPR’s Nina Totenberg discussing President Obama’s address to Congress, February 27, 2009 Inside Washington.

“This was the most ambitious President we’ve heard in this chamber in decades. The first half of the speech was FDR, fighting for the New Deal. The second half was Lyndon Johnson fighting for the Great Society, and we’ve never seen those two presidents rolled together in quite this way before....’ I think we’re watching one of the greatest political dramas of our time.”
— Senior political analyst David Gergen on CNN’s Anderson Cooper 360, February 24, 2009.

“This was actually a fireside chat. This is what I found so fascinating. From the very first sentence he basically said to the Congress ‘I’m not talking to you, I’m talking to the people who sent us here.’ And it reminded me, in some sense, of the radio speeches FDR gave where he talked about complicated issues in simple ways. Obama tried to explain how he got into this mess, why will my program make it better. Very intensely personal in the sense of talking to people at home watching one or two at a time in front of their TVs.”
— Correspondent Jeff Greenfield during CBS’s live coverage of Obama speech, February 24, 2009.

“And Americans loved it. The polls show that they’re very optimistic, and then out comes Bobby Jindal, Debbie Downer, saying ‘hated it, it’s not going to work.’”
— Co-host Maggie Rodriguez on CBS’s Early Show, February 25, 2009.