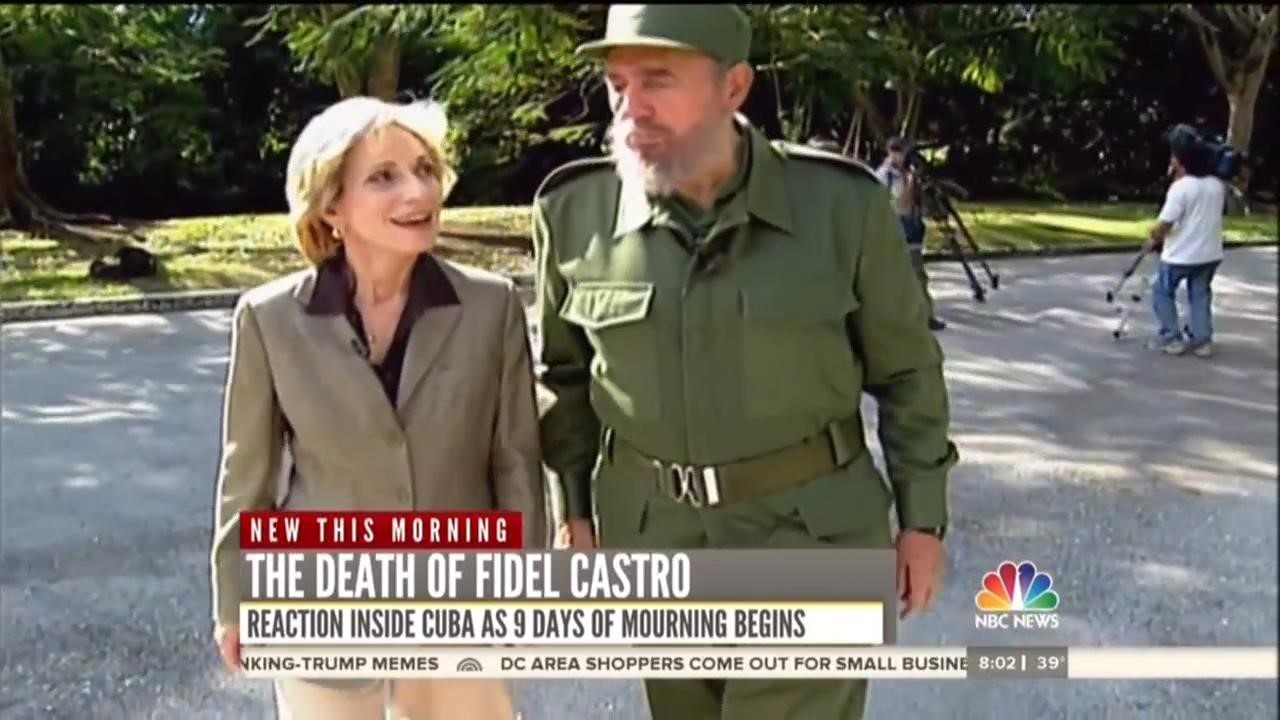 The funeral for Fidel Castro on Sunday will mark the end of a week’s worth of liberal media coverage that sought to normalize the communist dictator by attempting to balance out his mass murdering and tyrannical ways with his “advances in health care and in education” for the Cuban people he oppressed.

According to The Black Book of Communism, as cited by The American Spectator’s Paul Kengor, the Castro regime was responsible for 30,000 arrests for political dissent and 7,000 to 10,000 were believed to be executed. And that’s not counting the lives Castro was willing to put at risk with his welcoming of Soviet nuclear missiles in the sixties. As Kengor pointed out: “First, there’s the death he was responsible for since seizing Cuba in January 1959, and then, second, there are the incalculable millions more who would have died — not just in Cuba but in America and worldwide — had he gotten his way in October 1962.”

The obits delivered by liberal reporters should have focused on the horrors of Castro’s Cuba, and while they mentioned his role in the Cuban Missile Crisis and his human rights violations, many in the media had the audacity to temper his atrocities with praise of his communist ways. NBC News correspondent Andrea Mitchell recited the stale propaganda about how “he dramatically improved health care and literacy,” while ABC News correspondent Jim Avila called him the “George Washington of his country.” Disgraced former NBC Nightly News anchor Brian Williams even went as far to say the Cuban people were quite happy with Third World living conditions: “It’s still one of those nations where you see donkey carts alongside cars...because that’s exactly what they’d rather have for transportation.”

The following is a collection of the worst of the liberal media’s eulogies of the Cuban dictator since his death was announced late on November 25. For the media’s worst quotes from the past 30 years in the MRC archive, as collected by Rich Noyes, see: “Fidel’s Flatterers: The U.S. Media’s Decades of Cheering Castro’s Communism.”

“Even Castro’s critics praised his advances in health care and in education....Fidel Castro was considered, even to this day, the George Washington of his country among those who remain in Cuba.”
— Correspondent Jim Avila during ABC News coverage of Castro’s death early in the morning of November 26.

So What If Castro Stifled Dissent, He Delivered Crappy Health Care for All

“A declared socialist, he dramatically improved health care and literacy....He never tolerated free elections or dissent but gave his people better health care and education....I think he will be revered as someone who brought education and social services and medical care to all of his people.”
— NBC correspondent Andrea Mitchell during MSNBC's breaking news coverage of Castro’s death in the early morning of November 26.

“Many saw positives, education and health care for all, racial integration....Castro never lost faith in the revolution.”
— CNN correspondent Martin Savidge, in a pre-produced obituary, aired during CNN's 1am November 26 ET live coverage of Castro’s death.

Who Wouldn’t Take a Donkey Cart Over a 2016 Lexus?

“It’s still one of those nations where you see donkey carts alongside cars, trucks and buses in downtown Havana, because that’s exactly what they’d rather have for transportation.”
— Disgraced ex-NBC Nightly News anchor Brian Williams during MSNBC's live coverage of Castro’s death early in the morning of November 26.

Matthews Was a Fidel Fan Boy, But the Executions Turned Him Off

“He was a romantic figure when he came into power. And when he knocked off the corrupt dictator [Fulgencio] Batista we American, young high school kids and kids in those days rooted like mad for the guy. We thought here was this guy in fatigues with a beard coming in out of the country side, leading a revolution and swept aside this old corrupt regime. And he was going to be almost like a folk hero to most of us for many months....He would go on Meet the Press, he would go on The Jack Paar Show —  which was a forerunner of the Tonight show, Jimmy Fallon show — and he would be a figure that you’d look up to and say ‘God this guy is great!’ And then, of course, he began executing people and joining the Soviet side.”
— Hardball host Chris Matthews during MSNBC live coverage of Castro’s death in the morning of November 26.

Refusing the “Americo-Centric View” of Castro as Satan

“I disagree with you guys on the —  you present a very — and Mario Rubio just did that, a very Americo-centric view of Cuba, which is Castro as the, you know, satanic demon that the United States has —  in many ways he has been. But I think what President Obama’s statement reflects is that nobody in the rest of the world sort of agrees with you. The Castro that I grew up knowing as a child growing up in Liberia was a Castro who fought the South African apartheid regime that the United States was propping up. It was a Castro that sent Cuban soldiers into Angola and helped to bring down apartheid South Africa. And so there’s a lot of, there’s a lot of ambivalence when you look Fidel Castro that’s usually not reflected here. I think what President Obama’s statement was doing was reflecting that.”
— New York Times correspondent Helene Cooper on NBC’s Meet the Press, November 27.

Sure There Were Human Rights Violations, But “On the Other Hand...”

“It is a long and complex career. There is the analysis that will say look this guy took power, shut down speech, put people in prison, had a human rights legacy that was quite challenging and difficult for many people who were on the other end of it. On the other hand, he rewrote the social contract in Cuba, in a small island nation, in which he put health care, education, culture, and the capacity for Cuba to have an independent foreign policy front and center as part of his legacy. And in Cuba — and I think we have to understand that there are 11 million people in Cuba — that legacy will be digested as giving Cuba a place on the world stage.”
— CBS News consultant Julia Sweig on Face the Nation, November 27.

Fidel Will Be “Remembered Fondly”

“It’s very easy to have a simplistic view, that he was all awful for Cuba and the world, and I just don’t think that’s accurate. I think that the Cubans have a tremendous sense of pride over his legacy, and I think that he will be remembered fondly.”
— FNC’s Geraldo Rivera on Fox & Friends, November 26, talking about the death of Cuban dictator Fidel Castro.

“Well, he was so argumentative. I first went in 1999 when there were so many protests against the US at the height of the controversy over Elian Gonzalez, that 6-year-old boy. And we would argue, he would have dinners or meetings or interviews starting at midnight going to 2:00 and 3:00 in the morning so sometimes hard just to keep up with him. And we would debate politics and the human rights abuses and the lack of free elections, and over the years, I had many interviews with him and he was still combative. He read everything. He had access to the Internet, most people here did not back then. And he was a voracious reader questioning me about the politics and the economy in the US. And very, very aware of everything that was going on, very, very smart and very wedded to his revolutionary ideology.”
— Correspondent Andrea Mitchell on NBC’s Sunday Today, November 27.

“Though his iron fist no longer ruled Cuba, the 90-year-old was still a potent symbol of the revolution. [To man on the street] What was the best thing he did for the Cuban people?... Health and education?....Will it change without Fidel?....Whether you love Fidel Castro because of what he did in education and health care, or hate him because of civil rights and human rights, there is no doubt that he is considered here a revolutionary hero. Not only in Cuba, but in many place around the world, and also for his defiance of the United States.”
— Host Charlie Rose from Havana, on CBS This Morning, November 28.