On the day that the U.S. is ending combat operations in Iraq, the Today show, on Tuesday, brought on their chief foreign correspondent to essentially say the Iraq war wasn't worth it. The noted anti-war reporter, when asked by Today co-anchor Ann Curry did, "Anything positive come from this war?" proceeded to dump on the entire mission as he relayed that Iraqis are upset that the United States "has failed to deliver on its promises," claimed that Saddam Hussein, before the war, was "getting more moderate" and concluded that the mission was "a giant distraction of resources" and if not for the invasion of Iraq, the war in Afghanistan "would probably be over." [audio available here]

As the MRC's Tim Graham pointed out in 2006, Engel isn't exactly the most objective analyst the Today show could've brought on to analyze the war, as he admitted to the Washington Post's Howard Kurtz that he thinks "war should be illegal" and he told him "I'm basically a pacifist."

The following is the full exchange between Curry and Engel as it was aired on the August 31 Today show:

ANN CURRY: NBC's chief foreign correspondent Richard Engel has covered this war in Iraq since it began and also as it ended. Richard, good morning.

CURRY: So keying off what Mr. Gibbs just said, what Iraq are we leaving its people to write its, their future with?

ENGEL: Well, right now I think Iraq is in a very, very dangerous place. It's very possible they will have another round of civil war. In the end of his comments right there you, he was talking about the political accord between Sunni, Shiites and Kurds that helped to bring some security gains. That accord is calling apart right now.

CURRY: So how fragile on a scale of one to ten, ten being worst?

ENGEL: Yeah. I think it's very fragile. I think if they don't get a government in the next couple of months the, all of the gains from the surge could be wiped out.

CURRY: Anything positive come from this war?

ENGEL: Come from this war? Saddam Hussein is gone and any one, any Iraqi will tell you that. Saddam really was that bad. And every Iraqi suffered in that. And, but, but if you ask Iraqis what's happened since then and they will complain that the political structure that was created 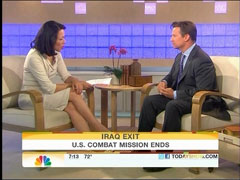 in their country, by the United States, has failed to deliver on its promises to the people.

CURRY: Meantime had the U.S. not invaded Iraq, where would Iraq be today? Where would the geopolitical situation be today?

ENGEL: If there had been no invasion Saddam would still be in power. He was probably getting more moderate. He was being welcomed into the, into, by, by a lot of European countries, he was being welcomed in Eastern Europe in particular. He was heading in a, in a direction of accommodation. The, the sanctions regime that was holding in place was starting to fail. So I think he would, it would be somewhat of a basket case but it would still, it would be - Iran would be a lot more contained. So it would be a dictatorship that was trying to break out of its box but Iran would not be as dangerous as it is, as it is today.

CURRY: And had the United States not invaded Iraq, would we be done in Afghanistan?

ENGEL: Probably. That was a giant distraction of resources, of intelligence assets. That war would probably be over.

CURRY: Richard Engel with perspective that's very valuable on this war and many other stories. Thank you so much this morning.