Perplexed Matthews: How Can South Carolina GOPers Vote for Indian-American But Not Support a Black President?

Chris Matthews, on Wednesday's Hardball, invited on recently defeated Republican Representative Bob Inglis to slam Matthews' favorite targets, namely the Tea Party, Rush Limbaugh and Sarah Palin and after he got the requisite criticisms out of the South Carolina congressman of those entities asked him if he could explain how primary voters from his own party could nominate an Indian-American like Nikki Haley, even though they've "got a problem with a black president?" Matthews, clearly not grasping the concept that perhaps voters in South Carolina could cast their ballot based out of purely ideological and not racial motives, asked Inglis the following question:

How do you figure your state out? It's pretty conservative obviously. It's Strom Thurmond country in many ways and, and it has people like DeMint pretty far over and then people like Lindsey Graham who are sort of regular conservatives. But then you nominated, your party has nominated an Indian-American woman, Nikki Haley. Obviously an attractive candidate, she knows how to present herself obviously, but what's that about? Is that just an interesting little aspect? "It's okay to be Indian-American but we got a problem with this black president?" What's that about? [audio available here]

Before Matthews ended his show on that stumper of a question, he egged on the soon to be former Representative Inglis to attack the Tea Party, Limbaugh and Palin, as seen in the following exchanges that were aired on the July 14 Hardball:

CHRIS MATTHEWS: Well, the Tea Party has racked up big wins already in 2010. They scared Senator Arlen Specter out of the Republican primary and watched him lose as a Democrat. Former Alabama Democratic Congressman Parker Griffith did the exact opposite. He jumped into the Republican primary and lost down there. Tea Partiers ousted Senator Bob Bennett at the Republican state convention out in Utah. They ran Governor Charlie Crist right out of the Republican Senate primary in Florida. And the latest victim of the Tea Party is South Carolina congressman Bob Inglis who lost a Republican runoff just last month after getting hammered in town halls for voting for TARP and knocking down false rumors about death panels. He joins us right now. Congressman Inglis, I want to make sure everybody knows you're not a RINO. You've got an 85 percent conservative record, you've got a five percent liberal record. You're a conservative, right?

MATTHEWS: Well I looked, I looked at it a couple years ago. So you're up to date at ninety, ninety-what?

MATTHEWS: So you're not conservative enough for South Carolina.

INGLIS: I needed that extra seven.

MATTHEWS: Oh my God! Well you told the Associated Press, quote, "I think we have a lot of leaders that are following those television and talk radio personalities and not leading us." We've had a little contest here, as you know, waiting for somebody. Well, you're a lame duck now but maybe you count. But we've been waiting for somebody to say "I'm not really a ditto head. I don't really follow Rush Limbaugh's thinking. He's not my leader." Are you ready to be the first?

MATTHEWS: Or are you still gonna hold back?

INGLIS: I don't, I don't follow Rush Limbaugh's lead. You know, when, when I found out I didn't? I was in six years and I was out of Congress for six years and I was listening to him one day and he's making fun of people in cars who get high fuel efficiency and I thought, you know, Rush, that's it. I turned the radio off.

INGLIS: Because it didn't fit with my dad who's 87 years old. He's my idea of conservative. He used to tell us, "Now, we gonna let off the gas at the Tarvers' and you coast to our driveway," because he's a conservative.

MATTHEWS: Well what happened to Teddy Roosevelt? Wasn't he a great conservative in the Republican Party?

INGLIS: Yeah and so my, yeah and so my thought was, you know, listen, conservatism is saving resources, and, and what Rush was further making fun of is people driving electric cars with regenerative braking. I'm thinking, if I make the investment to get up the hill with my gas, why wouldn't I want to generate electr 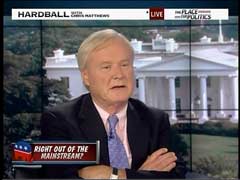 icity coming down the hill? I'm a conservative.

MATTHEWS: You, you sir, strike me, as I hate to use the word, as someone who's well-educated. I know you went to UVA Law School. Is that hurting you? Is - no I'm dead serious about this. Do you get hurt in the Republican Party now for having had a fine education? Do people think, look askance at you and say, "Oh he's an egghead, he's got a good degree from UVA" Is that a problem now, it's better to be a yahoo? Well I mean to be really uneducated like Palin, to really be proud of the fact you don't know anything?

INGLIS: There, there is a sense out there that ignorance is strength. But you know ignorance really is not strength.

INGLIS: And here's my view. I'm ignorant of a lot of things. There are a lot of things I need to know but if I choose to remain ignorant of those things, that's when, that's quite a different matter. So I have a sense of how much I don't know and I need to find out a lot of information. I think that's what education gives you is a sense of how much you don't know and let's go find it out.

MATTHEWS: Well, what do you make of Palin's -- without getting -- she seems like, I guess a nice person as a human being but the question is, is she selling herself as someone - she calls it common sense. But I think what she's really selling is "I don't read books. I don't read newspapers, Katie Couric. I don't read magazines. I don't need information. I have common conservative sense." What does that mean? To say you know things without having read it or learned anything? What do people know naturally?

MATTHEWS: Well, that fear that led people like Rick Perry of Texas to talk about secession, those old scare terms about race. I mean race is always an issue in America but to go back and rip that scab off? What's that about? Why are people doing that? Is it their fear, fear of change or is it just anger or what?

INGLIS: Yeah well, I think that we, what we're finding out here that in 2010 we have not fought the final fight against the scent of racism and won. We're still in it. We're still dealing with that problem. We always will be, but we need to extend grace to one another and have some honesty about it, understand that we are different, but let's find a way to extend grace and get through it, and that's - rather than womp up those fears and drive with misinformation reactions against people because of their party or their ethnicity. That's a real problem and it-

MATTHEWS: How do you figure your state out? It's pretty conservative obviously. It's Strom Thurmond country in many ways and, and it has people like DeMint pretty far over and then people like Lindsey Graham who are sort of regular conservatives. But then you nominated, your party has nominated an Indian-American woman, Nikki Haley. Obviously an attractive candidate, she knows how to present herself obviously, but what's that about? Is that just an interesting little aspect? "It's okay to be Indian-American but we got a problem with this black president?" What's that about?