Lauer to Obama: How Do You 'Move On' from the Vitriol, Sniping and Threats?

NBC's Matt Lauer, in an exclusive interview with the President on Tuesday's Today show, bought into Barack Obama's contention that opposition to the health care bill by Republicans was motivated solely by partisan and not ideological grounds as he underlined: "So you're saying it's all politics. It's, it's not about the inner workings of the bill, it's all politics" and clarified for the President "the fix was in, is what you're basically saying." Lauer also asked Obama how he will be able to overcome the Republicans to get anything done: "The vitriol, the rhetoric, the sniping, the threats, how are you possibly going to continue with any kind of legislative agenda when your opponents have said to you, 'I'm not gonna cooperate with this president, with these Democrats, unless it's a matter of national security.' How do you move on? [audio available here]

However Lauer did manage to ask some questions from the right as he pointed out 50 percent of people are opposed to his health care plan and cited the Wall Street Journal's Daniel Henninger, who pointed out that not having any Republicans, not even Olympia Snowe, vote in favor of the bill proves it's not exactly "legislation for the generations."

The following a portion of the interview as it was aired on the March 30 Today show:

MATT LAUER: Let's talk about health care reform. Health care law, now we can talk about. It's, it's seen as a huge victory for you, your presidency, for Democrats. It is a tough pill to swallow for Republicans. It's been described in a lot of different ways. Your, your vice president described it in colorful terms. How do you describe it?

BARACK OBAMA: I think it is a critical first step in making a health care system that works for all Americans. It's not gonna be the only thing. We're still gonna have adjustments that have to be made to further reduce cost. Now what we have is a system in place that preserves the employer-based system but says, number one, insurance companies, they have to behave themselves. We're gonna have a private system in insurance, but you can't bar people from getting insurance because of pre-existing conditions. You can't drop people when they get sick and need coverage most. So you can't game the system. The second thing is we've set up what's gonna be called an exchange, but it's basically just a marketplace where individuals who right now have to go out on their own and buy insurance and have no leverage are suddenly gonna be part of a pool of millions of people, including, by the way, members of Congress. And that gives them more buying power – the same way Walmart has more purchasing power when it buys from its suppliers. That will force insurance rates down for the vast majority of people. So what we now have is the basic principle that in a country as wealthy as ours, nobody should have to go without basic health care. My hope is that this year we're gonna see some very concrete benefits that people get. Small businesses are gonna get billions of dollars in tax breaks to provide insurance to their employees. Parents are gonna be able to put their children on their health insurance up to the age of 26. Insurers are not gonna be able to just drop people from coverage because they feel like it.

OBAMA: Well, look. I think that the Republican Party made a calculated decision, a political decision, that they would not support whatever we did. Alright? There was a quote by a well-known Republican senator who said, "This is gonna be Obama's Waterloo. This is gonna, we're gonna bring him down, just the same way that we brought down Bill Clinton, by making sure that health care fails." And I think that's unfortunate because when you actually look at the bill itself, it incorporates all sorts of Republican ideas. I mean a lot of commentators have said, you know, this is sort of similar to the bill that Mitt Romney, the Republican governor and now presidential candidate, passed in Massachusetts. A lot of the ideas in terms of the exchange, just being able to pool and improve the purchasing power of individuals in the insurance market. That originated from the Heritage Foundation and-

LAUER: So you're saying it's all politics.

LAUER: It's, it's not about the inner workings of the bill, it's all politics.

OBAMA: I will say that, that any objective observer looking at this bill would say that this is a middle of the road, centrist approach to providing coverage to people and making sure that we are also reducing costs. I am frustrated that Republicans who I think had an opportunity to help shape this bill declined that opportunity. That's not to say that on specific provisions there might be legitimate concerns that they had, philosophical concerns that they had. Some of them I think sincerely believed that we should do more on, you know, this aspect of the bill or that aspect of the bill. But the overall architecture of it was actually something that was, was right down the middle.

LAUER: Daniel Henninger, who's the deputy editorial page editor at the Wall Street Journal had an interesting take on it, Mr. President. He said "If you produce a bill that even Olympia Snowe of Maine cannot vote for, you have not produced legislation for the generations, you've produced once-in-a-lifetime legislation that no Republican, from any constituency across America, can vote for." What's your response to that?

OBAMA: And my response is, well number one, the Wall Street Journal editorial page generally is not favorable to much-

OBAMA: -much of what I do. I think what's interesting is that if you actually break down the specifics of the bill, you will see that this historically 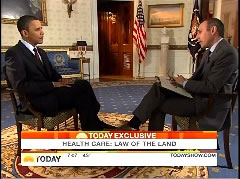 LAUER: What you keep coming back to, is that the fix was in, is what you're basically saying.

OBAMA: I think, I think what happened is that they made a calculation, which if you are thinking in terms of short-term politics, you, you can see the argument. Their, their attitude is, "Well if we stop this bill, if we paint it as-

LAUER: And stop this president here.

OBAMA: "-then and we stop this President here, then that will give us a lot of political benefit in, in November." What I've tried to say throughout is, I will continually reach out to Republicans, I will continue to incorporate their ideas even when they don't vote for the ideas that I've presented, but what I'm not gonna be dissuaded from is us going ahead and taking on these big challenges that are critical in terms of America's long-term economic health.

LAUER: When we announced we'd be sitting down with you here at the White House today, our in-box filled quickly from e-mails from viewers all around the country. And Jeff in Minnesota asked a question I'd like your response to. He said, "Mr. Obama, the CBO just issued a statement this past week that social security had reached the tipping point a full six years earlier than they had originally estimated. With that said how can we believe their figures on your health care plan that says we'll save $138 billion over 10 years?"

OBAMA: The reason that the tipping point was reached a little bit earlier is because the recession was so devastating. And presumably if growth picks up then you'll see that adjustment made again. Now social security generally has to be reformed to ensure long-term sustainability. But in any given year or any given period it might end up being way off from estimates because of something like the financial crisis. Here's the interesting thing though. The Congressional Budget Office, historically has actually underestimated the savings whenever Medicare has been reformed, whenever we've made changes. And that was true the last time it was done. So we actually feel pretty optimistic that not only is $138 billion gonna be saved in the first 10 years, but more significantly, $1 trillion is gonna be saved in the second 10 years.

LAUER: Let's talk about where we are politically right now. And I don't have to tell you that this passage of this bill and, and, and turning it into law has left this country as politically divided as I think it has been in a long time. You might be able to cite some other examples, but the vitriol, the rhetoric, the, the, the sniping, the threats, how are you possibly going to continue with any kind of legislative agenda when your opponents have said to you, "I'm not gonna cooperate with this president, with these Democrats, unless it's a matter of national security." How do you move on?

OBAMA: Well, first of all, I think that a lot of the rhetoric has been overheated and overblown and this is what happens in Washington when you have a big debate. Suddenly the passage of this bill is Armageddon. And as I pointed out, the next day after I signed it, I looked around, and no asteroids had hit the planet, no cracks had appeared in the, in the earth. This is a bill that is going to help a lot of people and help to lower costs of health care, but it is not a radical departure from what we've done in the past.