The following exchange was aired on the August 11, edition of "Hardball:"

STEPHEN MOORE, THE WALL STREET JOURNAL: Certainly I agree that when, when people go to these kind of town hall meetings and tea parties they should be very respectful and polite. As you know, Chris, I've been on college campuses where I've been shouted down and not able to speak as a conservative and I think it's just ill behavior. But I do think it's important for people like Ed Rendell to understand there is an amazing amount of rage out in this country. It's, it's, it's, now again I think people should keep it under control.

CHRIS MATTHEWS: Rage at what?

MOORE: Rage because of the $800 billion obscene fiscal stimulus bill...

MATTHEWS: Are you telling me that these guys were created by this new president? That the people we're watching on television with their guns and their attitudes about the republic weren't around before January 20th?!

MOORE: Well Chris here's the problem with, look I don't agree with that gentleman that you had on before. I think it is absurd to bring a gun to these kinds of meetings. So I agree with you entirely on that. But I think that you all are kind of missing the point of what's going on here. There are hundreds of millions, I mean hundreds of thousands of Americans who are so enraged about what's going on.

MOORE: This is still a pretty conservative country and people are upset about the policies in Washington and they don't think the politicians are listening.

MATTHEWS: Okay I think, I think some of the people are upset because we have a black president. Let's take a look at Senator Specter's town meeting. Some of these statements people are 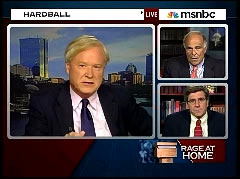 MATTHEWS: Listen to what they're saying! Let's listen-

MOORE: This has nothing to do with race. That's, that's an absurd comment.

MATTHEWS: Oh no let's listen to what they're saying. Here's a Specter town meeting. And then Governor react to this.

UNIDENTIFIED WOMAN: I don't believe this is just about health care. It's not about TARP. It's not about left and right. This is about the systematic dismantling of this country. I'm only 35-years-old. I have never been interested in politics. You have awakened the sleeping giant. We are tired of this. This is why everybody in this room is so ticked off. I don't want this country turning into Russia, turning into a socialized country. My question for you is, what are you going to do to restore this country back to what our Founders created, according to the Constitution!

MATTHEWS: What do you make of it? Is this about the health care bill or is this about some basic, sort of, almost secessionist movement going on out there against any kind of federal role in anything to do with social welfare?

RENDELL: Well I grant Stephen one point. I think there are people who are legitimately concerned about the amount of debt the country is running up. And, and I think that is a legitimate concern. However to say that these people who come to the rally that, that's foremost on their mind. Stephen let's begin with the fact that many of these people are birthers. The birthers are absolutely nuts. They won't believe the clear and credible evidence that President OBama was born in Hawaii. Hawaii is part of the United States of America. I think the birthers are-

MOORE: Ed, Ed. Governor let me say this. I hope that you all on the left keep calling, calling these people who go to these tea parties and town hall meeting nuts, because you're talking about the broad USA.

MOORE: But look you are! You look at a couple of people like this nut who brings a gun to this rally and say, "These people are just crazy! Why don't they just shut up and go home!" And you know, we, and Chris-

MOORE: -I have to say it is so outrageous for you to say that these people are angry because we have a black president. I mean it makes me think that you're totally out of touch with...

MOORE: A lot of people voted for Barack Obama.

MATTHEWS: No the reason, the reason, the reason I say it is because I look at the map of the United States and I see where people question his birth. And I see the pattern of race here and it's historic in our nature. And I see it and I don't like it. And you're telling me these people just have, just have idol thoughts. "Well he may not be born here." Could it not be his ethnicity? And you deny that Stephen? You deny that's the issue here?

MATTHEWS: His ethnicity? That's not the issue here.

MATTHEWS: You really don't believe that?!

MATTHEWS: And you look at the people, the kind of people that have been jumping up and down on this issue.

MOORE: Chris, Chris I think most conservatives, that I know, and I go to a lot of these meetings, they're proud of the fact that we have a black president today. They genuinely are proud of our country for electing a black, black president. They don't agree with his policies but the fact that we have grown beyond racism, I think, is a great thing for this country. I think most conservatives agree.

MATTHEWS: You think these people vote for Obama?

MOORE: Some of them did.

MOORE: I know some of them do. I went to these tea parties. A lot of them are independents. A lot of the people who were angry, angry at George Bush as they are with Barack Obama. They just think our country is out of control. You don't, you can't borrow $10 trillion over the last decade. We're losing control of our country.