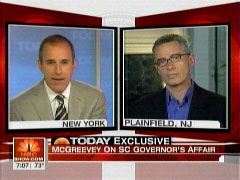 NBC's Matt Lauer, at the top of Thursday’s "Today" show, was careful to note the party affiliation of Mark Sanford as he announced "The political future of South Carolina's governor Mark Sanford, a once-rising star in the Republican Party, is very much in doubt." However when he invited on former Democratic New Jersey Governor Jim McGreevey – who resigned after admitting an affair with a gay man who he appointed to office – to discuss the story, he never mentioned McGreevey was a Democrat.

After a set-up piece by Mark Potter, Lauer interviewed McGreevey and asked him the ex-governor, "If it comes out that the governor used taxpayer money to go to Argentina on one or more occasions, does that complicate the issue? And, and would that make it more difficult for him to survive in office?" Interestingly Lauer failed to mention the fact that this was one of the reasons that forced McGreevey to step down.

The following are the relevant teasers and then full segment as they were aired on the June 25, "Today" show:

MEREDITH VIEIRA: Good morning, intimate exchange. Hours after his tearful confession emails surface detailing the affair between South Carolina Governor Mark Sanford and his mistress in Argentina. This morning an exclusive interview with someone who knows all about being caught in a sex scandal, former New Jersey Governor Jim McGreevey.

MATT LAUER: And this morning the political future of South Carolina's governor Mark Sanford, a once-rising star in the Republican Party, is very much in doubt.

VIEIRA: As if his words at that news conference, where he admitted the affair, weren't enough, just hours later some steamy emails surfaced between Governor Sanford and his Argentinean mistress. But despite it all his spokesperson says the governor has no plans to step down. Much more on the absolutely bizarre chain of events of the past few days in just a moment.

VIEIRA: But first let's begin with that shocking sex scandal involving South Carolina's governor, and the unusual way that the affair came to light. NBC's Mark Potter is in Columbia, South Carolina, with the latest. Good morning, Mark.

MARK POTTER: And good morning to you, Meredith. Not everyone here believed that original story that the governor was hiking along the Appalachian Trail. But when they heard his version of why he was actually in Argentina, many here were stunned.

GOV. MARK SANFORD: What I have found in this job is that one desperately needs a break from the public.

POTTER: The mystery finally came to an end when Governor Mark Sanford went public and confessed that his story-

SANFORD: I love the Appalachian Trail.

POTTER: -and his life.

SANFORD: It's gonna hurt and we'll let the chips fall where they may.

POTTER: -had been a lie.

SANFORD: The bottom line is this, I've, I've been unfaithful to my wife. I developed a relationship with a what started out as a dear, dear friend from Argentina. It began very innocently, as I suspect many of these things do.

POTTER: Although his staff had said Sanford was away, hiking the Appalachian Trail, he actually was in Buenos Aires, Argentina. He said he had lied to his aides, and apologized to them, his four sons, his wife, and the woman in Argentina.

SANFORD: I hurt her. I hurt you all. I hurt my wife. I hurt my boys. I hurt friends like Tom Davis. I heard a lot of different folks. And all I can say is that I apologize.

POTTER: Sanford said he met the woman eight years ago. The relationship deepened a year ago. And was discovered by his wife Jenny five months ago. He said he was trying to work things out with his family.

SANFORD: I spent the last five days crying in Argentina.

POTTER: In the most emotional part of the news conference he thanked a friend of the family.

SANFORD: Hang, hang, hang on. An incredibly dear friend. And he is been helping us work through this over these last five months. And Cubby I want to say thank you for being there as a friend.

OFF-SCREEN VOICE: Are you separated from the First Lady?

SANFORD: I don't know how you want to define that. I mean I'm here and she's there. I guess in a formal sense we're not.

POTTER: After the news conference, his wife handed out a statement of her own, saying she'd asked the governor to leave the house two weeks ago, but would try to forgive him now. As for the trip itself, Sanford had left his car last week at the Columbia, South Carolina airport, filled with hiking and camping gear. But when confronted by a reporter Wednesday morning, after returning to the Atlanta airport, he still lied about the trip.

GINA SMITH, THE STATE: His response was, well he had originally intended to hike the Appalachian Trail, but had changed his mind last minute and decided to go someplace more exotic.

POTTER: But hours later, before the cameras, he came clean.

SANFORD: I would simply say I go back to that simple word of asking for forgiveness.

POTTER: Now, late yesterday some emails were published, reportedly between the governor and the woman in Argentina, one from the governor last year, said quote, "Please sleep soundly knowing that despite the best efforts of my head, my heart cries out for you. Your voice, your body, the touch of your lips, the touch of your fingertips, and an even deeper connection to your soul. The newspaper, The State here in Columbia, which published them, said that the governor's office did not dispute the veracity of those emails. Matt?

LAUER: Alright, Mark Potter in Columbia, South Carolina for us this morning. Mark, thank you very much. Former New Jersey Governor Jim McGreevey saw his political career come to an end after announcing he had an extramarital affair with a man. He's with us exclusively this morning. Governor, good to see you, good morning.

LAUER: It was hard too watch Governor Sanford yesterday during his news conference without thinking back five years to when you stood in front of the cameras. I know you didn't watch the news conference, but you've read the transcript. What are your thoughts on, on what he admitted to?

MCGREEVEY: Well, I think it's a very human. It's, you know, I'm filled with a sense of pain and anguish for him and for his family. But I think it was a very human moment. And it was very truthful. And sort of to come back the long process of healing and the long process of redemption, I think first you have to be truthful with one's self, with one's family, and with reality as it is, not as we would like it to be.

LAUER: When you stood in front of the cameras your wife at the time Dina was by your side. His wife Jenny was not by his side but she did release a statement. She said she still loves her husband, she's proud of his accomplishments as a public service, servant and then she said this Governor, she said, "I believe enduring love is primarily a commitment and an act of will, and for a marriage to be successful that commitment must be reciprocal. I believe mark has earned the chance to resurrect our marriage." Which is amazingly generous, given the circumstances. How much impact will the way Jenny Sanford acts over these next days and weeks have on his ability to survive this scandal?

MCGREEVEY: Well Matt, I'm at a point in my life where I don't want to engage in political prognostication. But I think what's most important now is for the person, for the man, and for the family. And I think what's essential for me, and I don't presume to give judgment, or advice to the governor, but is, is honesty. Second, a sense of humility, understanding where one is, in terms of one's relationship, and one's relationship with God. And third, also understanding the importance of getting beyond one's self. And that is rededicating, for me, a sense of service. And a sense of Godliness. I think too often, and for me in the political process, you begin to think of yourself as master of your own universe and your own set of ethical structures, your own sense of decision making. And when I had my crisis, I sort of, sort of confronted my own moment of truth. It was also ironically perhaps one of the greatest moments of blessing of grace in my life, where I sort of corrected course once again.

LAUER: Well but, but, but, but Jim I want, I want to go back. Because as a former governor you can also identify with another part of this story. And this is the highest ranking elected official in a state, state of South Carolina, who leaves his state, doesn't tell anyone where he's going. He's unreachable for five days. Politically and professionally, was that a fatal mistake?

MCGREEVEY: Oh, I don't know South Carolina as well as, as perhaps you do. You know, I think ultimately the governor has to decide in his conscience, in his, within the quiet of his heart whether, where he is at. And whether service and service to the citizens of South Carolina is his priority. And for me, I think it's, it's that self-examination, it's that critical reflection. It's not only the apology, it's not only the amendment, but also trying to move forward with humility and seeing, you know first, is an obligation to, to correct the relationship with one's family. And then move forward to service. And also, it's, it's, it's a very difficult process to undertake under the glare of cameras.

LAUER: Just one final question, Jim. If it is, if it comes out that, and this is hypothetical, but if it comes out that the governor used taxpayer money to go to Argentina on one or more occasions, does that complicate the issue? And, and would that make it more difficult for him to survive in office?

MCGREEVEY: Well, clearly that would, but Matt, you know I work with prisoners, ex-prisoners every day, and Exodus in Harlem and prisoners have the capacity, ex-offenders have the capacity to rewrite their stories and give new meaning to their lives. And I would just ask people for a sense of compassion at a very difficult time. And, and as a Christian, I believe in the power of forgiveness, and the ability to transcend one's circumstances as they are now. And so, if the governor has, for me, if you're able to move with a sense of truthfulness, if you're able to be humble about one's circumstances. To, to rewrite one's self with one's God, I think that gives a capacity to, to move beyond these circumstances. And I also believe we all sin. We all fail. It's how we grapple with that failure. How we grapple with that, you know, sinful nature to be able to move to the next point of our lives. And this isn't something to be ignored. This is something I believe with integrity, if the governor embraces it with honesty, he can be that much more of a better governor because it's admitting his nature, understanding the wrong, but being able to move past through it with integrity.

MCGREEVEY: Be well. All the best.