Lauer to Obama: Are You Worried about a Gitmo 'Willie Horton?' 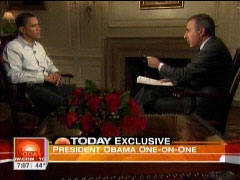 In a portion of Matt Lauer's interview with Barack Obama, not aired before the Super Bowl, but aired on Monday's Today show, Lauer asked the president about the release of a Guantanamo prisoner coming back to haunt him. However, Lauer couched the question in not public safety, but political terms as he asked the president, "If one of those people that's released goes back and takes part in the planning of, or carrying out of, an attack against U.S. interests, you're gonna have a Willie Horton times 100 situation." In other words Lauer bypassed asking how upset the president would be if a released Guantanamo prisoner killed U.S. citizens, nor asked how worried Obama would be if Republicans made a Willie Horton like ad, featuring the terrorist, to hurt him politically.

The following exchange was aired in the 7am half hour of the February 2, "Today" show:

MATT LAUER: Let me go on quickly, if I can, to some other subjects. You signed an executive order in your first week, that says you'll close the military detention center at Guantanamo within a year. So the clock is ticking. And already you've heard the criticism that you don't know what you're gonna do with the 245 prisoners being held there?

BARACK OBAMA: It's the right thing to do, ultimately it will make us safer. You've already seen in the reaction around the world, a different sense of America by us taking this action.

LAUER: Some of these people may be released.

LAUER: The ones that seem to be less of a threat. But, if one of those people that's released goes back and takes part in the planning of, or carrying out of, an attack against U.S. interests, you're gonna have a Willie Horton times 100 situation, on your hands. How are you gonna deal with that?

OBAMA: Of course I'm worried about it. Look the, the, you know I have to make the very best judgments I can make in terms of what's gonna keep the American people safe. And is what, what's gonna uphold our Constitution and our traditions of due process. If we don't uphold our Constitution and our values, that over time, that will make us less safe. And that will be a recruitment tool for organizations like al-Qaeda. That's what I've got do keep my eye on.